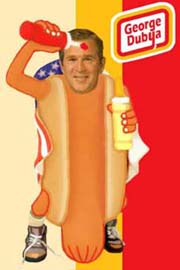 Even David Broder gets something right now and then:

… after the fiasco of the Harriet Miers nomination and the other reversals of recent days and weeks, the Alito nomination inevitably looks like a defensive move, a lunge for the lifeboat by an embattled president to secure what is left of his political base. Instead of a consistent and principled approach to major decision making, Bush’s efforts look like off-balance grabs for whatever policy rationales he can find. The president’s opponents are emboldened by this performance, and his fellow partisans must increasingly wonder if they can afford to march to his command. …

… The conservative screamers who shot down Miers can argue that they were fighting only for a “qualified” nominee, though it is plain that many of them wanted more — a guarantee that Miers would do their bidding and overrule Roe v. Wade . But whatever the rationale, the fact is that they short-circuited the confirmation process by raising hell with Bush. Certainly there can be no greater sin in a sizable bloc of sitting senators using long-standing Senate rules to stymie a nomination than a cabal of outsiders — a lynching squad of right-wing journalists, self-sanctified religious and moral organizations, and other frustrated power-brokers — rolling over the president they all ostensibly support.

But the message that has been sent is that this president is surprisingly easy to roll.

Look, people, he’s a weenie. He can swagger and talk tough, but deep down inside he’s a sniveling little cowardly weenie.

The Toronto Star editorialized on this point a year ago; article archived here:

But is he a weenie?

What evidence is there of Dubya’s weenieness, apart from him chickening out when it came to going up against the filthy Commies in the skies over the Rio Grande during the unpleasantness in Vietnam?

He was afraid to speak to real, live U.S. voters except in situations where everybody had been required to sign a loyalty oath.

He was afraid to speak to the British Parliament.

The thought of being anywhere near Parliament in Ottawa has scared him speechless.

Every American who heckled him during the election campaign got arrested.

But in satellite nations like the United Kingdom, not to mention rogue countries like Canada, it’s out of his hands.

Anybody could holler anything when he’s here next week and get off scot free.

This makes him very, very anxious.

Ron Fournier writes for the Associated Press that Bush appears to have lost his way:

The building blocks of President Bush’s career — his credibility and image as a strong and competent leader _ have been severely undercut by self-inflicted wounds, leading close allies to fret about his presidency. They say he’s lost his way.

These senior Republicans, including past and current White House advisers, say they believe the president can find his way back into people’s hearts but extreme measures need to be taken. Shake up his staff, unveil fresh policies, travel the country and be more accountable for his mistakes — these and other solutions are being discussed at the highest levels of the GOP.

But Bush is too big a weenie for a make-over. As I wrote yesterday, Bush’s little permanent entourage is for him a a coccoon of co-dependency that maintains and protects his mighty ego. He’d be naked and alone without them. Major staff shakeups are out of the question.

He took a stab at a “fresh” policy recently with the bird flu proposals, but as Keith Olbermann pointed out on last night’s Countdown, Congress had already acted on most of his proposals. Senator Tom Harkin of Iowa said,

Many of the points the president just made tracked very closely with what weâ€˜ve already done here. Iâ€˜m surprised the president keeps saying heâ€˜s going to ask Congress to do these things. Weâ€˜ve already done it. We put the money in there a week ago in the appropriations bill, for our labor health human services appropriations bill, and we addressed all those issues. We put the money in there for global surveillance, for vaccine production, and especially for state and local public health entities.

Iâ€˜m glad the president mentioned that because his budget that he sent up this year cut over $100 million from our state and local public health agencies. So I hope heâ€˜ll come up and help us put the money back in there for that.

Travel the country–he traveled the country on the recent Bamboozlepalooza Tour, did he not? And see how that turned out! And as for being more accountable for his mistakes–he said he took responsibility for Katrina mishaps, although you know he didn’t mean it. As Nancy Gibbs and Mike Allen recently wrote in Time, these days Bush seems to be blaming everybody but Laura and himself for recent White House problems. Fournier writes,

Bush accepted responsibility, but the belated and reluctant nature of his mea culpa did not go over well with Americans who like their leaders to be buck-stops-here accountable.

“I think it’s hard for the president to admit mistakes,” said Chris DePino, former chairman of the Connecticut GOP. “It would be better if he did.”

So the “highest levels of the GOP” can talk about reversing Bush’s downward spiral all it likes; Bush doesn’t have it in him to make the kind of changes that are necessary.

Instead of facing up to his problems, Bush is going to run away. At the Guardian, Simon Tisdall notes that Bush is not exactly taking a stand:

After a dinner tomorrow for Charles and Camilla, Mr Bush is off to Latin America and a summit in Argentina. Later this month he will visit Japan, South Korea and China. A trip to Mongolia, where sheep matter more than Lewis Libby, Karl Rove or Dick Cheney, may provide welcome relief from Washington’s rancorous ruminations.

The flaw in this plan is that Mr. Bush’s foreign policy agenda is an even bigger mess.

Complaining of US indifference, Latin American countries have moved broadly left during his tenure; and tensions with Bolivarist Venezuela and communist Cuba have sharpened. Last year Mr Bush became the first US president to see his candidate for secretary general of the Organisation of American States fail to be appointed.

Another set of problems awaits Mr Bush in Asia, ranging from export, currency and security-related disputes with China and rising anti-Americanism in South Korea to the supposedly nuclear-armed North Korea.

These tough regional agendas do not take into account other international friction points, notably accelerating US confrontations with Iran and Syria, the ongoing conflict in Iraq, and fraught world trade tariff reduction negotiations in Hong Kong next month. On all these fronts, perceived presidential weakness is certain to be exploited.

Nowhere to run to, baby, nowhere to hide …

3 thoughts on “W Stands for Weenie”