As I keyboard I’m listening to Tom Kean of the 9/11 commission telling Tim Russert that the government is not following up on critical recommendations for national security. It approaches scandal, he says. Lee Hamilton, Kean’s co-chair, said there is a lack of urgency in the federal government. Who’s responsible? asks Russert. Both men squirm a bit and say, well, Congress ought to be doing these things. What neither man will say is that there is utterly no leadership coming out of the White House on real national security issues. 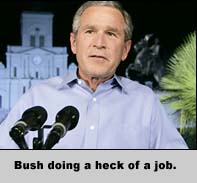 Lost amid continued talk of billions in federal aid is the fact that most homeowners and businesses are being left to make the toughest calls on their own. Lost is that New Orleans’ recovery â€” which President Bush once suggested would be one of the largest public reconstruction efforts the world had ever seen â€” is quickly becoming a private market affair.

Meanwhile, on Friday Louisiana Gov. Kathleen Blanco released more than 100,000 pages of documents that reveal the clashes among city and state officials and the Bush administration during and after Hurricane Katrina. Joby Warrick, Spencer S. Hsu and Anne Hull write in the Washington Post,

“We need everything you’ve got,” Blanco is quoted in a memo as telling President Bush on Aug. 29, the day Katrina made landfall. But despite assurances from the Federal Emergency Management Agency that 500 buses were “standing by,” Blanco’s aides were compelled to take action when the FEMA buses failed to materialize, documents show. “We need buses,” Andy Kopplin, chief of staff to Blanco, said in an e-mail to Blanco staffers late on Aug. 30, the day after the storm hit. “Find buses that can go to NO [New Orleans] ASAP.”

Two days later, on Sept. 2, Blanco complained to the White House that FEMA had still failed to fulfill its promises of aid. While cloaked in customary political courtesies, Blanco noted that she had already requested 40,000 more troops; ice, water and food; buses, base camps, staging areas, amphibious vehicles, mobile morgues, rescue teams, housing, airlift and communications systems, according to a press office e-mail of the text of her letter to Bush….

…Tensions between state leaders and the White House seemed at times near the boiling point. At 3:49 p.m. on Sept. 2, after spending three hours to appear with Bush at a Mississippi news conference, Rep. Charlie Melancon (D-La.) wrote Blanco’s staff, “I am returning home to baron[sic] rouge in hoping I can accomplish something for the people I represent other than being occupied with PR.”

He added that Bush’s “entire effort on behalf of the federal government has been reflected in his and his people’s nonchalant attitude to the people of LA. You may give him this to read.”

As DemFromCT writes at The Next Hurrah, “This is a President who can’t be bothered to govern.” Chris at AMERICAblog adds, “It’s always the same story with Bush regardless of the subject. There are always so many promises and then a complete failure to follow up on anything unless it’s a juicy handout to his friends.”

However, Eric Lipton at the New York Times writes that the White House did respond quickly to the murderous hurricane. By the time the winds died down the crack Bush public relations team had sprung into action to scapegoat Governor Blanco.

If you haven’t been following James Fallows’s articles on Iraq for the Atlantic Monthly, let me assure you they are worth the price of a subscription. His most recent piece, “Why Iraq Has No Army,” is wonderfully relevant in light of current claims about the readiness of Iraq security forces. These two sentences in particular caught my attention: “The United States has recently figured out a better approach to training Iraqi troops. Early this year it began putting more money, and more of its best people, on the job.”

Let me repeat: The United States has recently figured out a better approach to training Iraqi troops. Early this year it began putting more money, and more of its best people, on the job.

I distinctly remember that the training of Iraq troops was an issue last year. It came up in at least one of the presidential debates, as I recall. We’ve known since 2003 that such training was critical to any success in Iraq. But it took the Bushies nearly two years after the invasion to pick up the pace? The U.S. military, Fallows writes, say that “the war’s planners, military and civilian, took the postwar transition too much for granted; then they made a grievous error in suddenly dismissing all members of the Iraqi army; and then they were too busy with other emergencies and routines to think seriously about the new Iraqi army.”

Yet the boy always finds time for his month-long August vacation.