If it weren’t for the fact it was released on al Jazeera, I’d wonder if the new bin Laden tape hadn’t been fabricated in the White House basement. The last time we heard from him, I believe, was on the eve of the 2004 elections. And here he is again, just when Georgie needs a diversion from this little Fourth Amendment problem.

On the tape, bin Laden suggests a truce in Iraq. To which I say, whoop-di-doo. Only 7 percent of the people we’re fighting in Iraq are affiliated with al Qaeda, according to authoritative sources, and we don’t know how many of the 7 percent actually take orders from bin Laden. Osama’s talkin’ out of his butt, says I.

Our little altercation in Afghanistan may have started out as a conflict between al Qaeda and supporters versus Afghan freedom fighters with western military support. And the scuffle in Iraq may have been conceived as one between BushCo and anti-western Islamic terrorism. But it seems to me that the violence in both countries is spinning out of control and is in the hands of more conflicting factions than you can shake a kufie at. It’s way past the point where two sides can shake hands and make a deal, even if they both wanted to. We’re not in control over there, but neither is Osama bin Laden.

I’m not sayin’ that’s the way I want it. That’s just the way it is.

Osama says he is preparing new attacks on the U.S., which isn’t exactly a big surprise, either.

I got news for you, toots; a majority of Americans think invading Iraq was a mistake and think we ought to be working real hard at getting out. That’s what polls say. Facts is facts.

If both Osama bin Laden and George W. Bush remark that the sky is blue, what does that tell us? (a) ObL and GWB are secretly in cahoots, or (b) the sky is blue.

Whether today’s message has any real significance, or whether it’ll prove to be something the Right will wank over for a while and then forget … well, your guess is as good as mine. Is there anything we should be doing differently because of this tape? Possibly beefing up security in major cities, but given the general waste of space the Department of Homeland Security seems to be, the cities are on their own. There’s no meaningful hope for a truce, unfortunately.

Is it just me, or does it seem to you the Right is more frantic than usual these days? 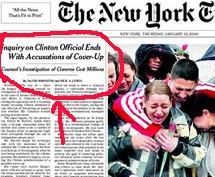 This week, through the media echo chamber, the VRWC has fallen back to snapping at the Clintons. They’re on the third day of a rampage because Hillary Clinton said Congress is run like a plantation — Chris Matthews has been wanking over Hillary and the P word since Tuesday — and they managed to place “Clinton” and “Cover-Up” together in a headline in today’s New York Times. On page 1, right under the masthead, no less. Seems like old times.

Like the plantation flap, the Times‘s story — “Inquiry on Clinton Official Ends With Accusations of Cover-Up” — is one that begs the question, “What is it about the Clintons that drives righties batshit crazy?” Here’s the lede:

After the longest independent counsel investigation in history, the prosecutor in the case of former Housing Secretary Henry G. Cisneros is finally closing his operation with a scathing report accusing Clinton administration officials of thwarting an inquiry into whether Mr. Cisneros evaded paying income taxes.

Yes, indeed; the investigation of Henry Cisneros, which cost taxpayers $21 million and lasted more than a decade, is finally closed.

You might recall that in the long-ago days of the Clinton Administration, Cisneros was indicted on 18 felony counts, pleaded guilty to a misdemeanor charge of lying to investigators, and eventually was pardoned by President Bill C. Yet the prosecutor, David M. Barrett, has been toiling away these six years since trying to pin more indictments on Cisneros, and he blames a Clinton cover-up for his inability to do so. (It couldn’t possibly be because Barrett is an incompetent investigator or that there wasn’t any more wrongdoing by Cisneros for an investigation to uncover, huh?)

Barrett’s final report will be made available today. The Times says is “reveals little new about the accusations that led to Mr. Barrett’s appointment” in the 1990s. 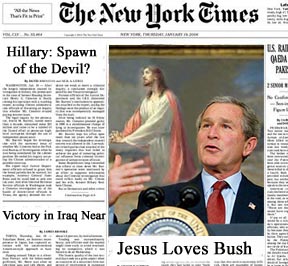 In spite of the Times’s compliance with the VRWC program, some rightie bloggers are screaming about liberal bias. Makes me wonder what the Times would have to do to appease them.

The rest of the article consists of Barrett accusing the Justice Department and IRS officials of hiding evidence that would have incriminated Cisneros, and JD and IRS officials saying that Barlett is too incompetent to sort his own socks. The ever-optimistic Captain Ed writes that the story “will prove explosive to the 2006 re-election effort of Hillary Clinton, but even more damaging to her expected run at the Presidency in 2008.” So some good may come of it after all. However, seems to me that unless Barrett has actually uncovered something new it’s going to be hard for the Right to sustain this story long enough to impact the elections, no matter how hard the VRWC flogs it.

But, no question, today the VRWC wins on points. These are some of the stories not on the front page of the New York Times: “White House won’t discuss meetings between officials, Abramoff“; “Congressional Agency Questions Legality of Wiretaps“; and “Going Nuclear: Iran and North Korea seem determined to build up arsenals of nuclear weapons.” I say righties should enjoy success when they’ve achieved it.