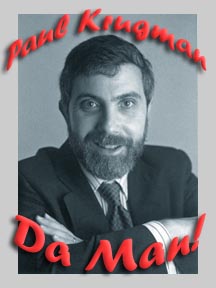 Finally, someone in the “MSM” gets the Abramoff/”bipartian” scandal story straight. It’s Paul Krugman, behind the New York Times subscription firewall. Fortunately you can read the column on True Blue Liberal. It begins:

â€œHow does one report the facts,â€ asked Rob Corddry on â€œThe Daily Show,â€ â€œwhen the facts themselves are biased?â€ He explained to Jon Stewart, who played straight man, that â€œfacts in Iraq have an anti-Bush agenda,â€ and therefore canâ€™t be reported.

Mr. Corddryâ€™s parody of journalists who believe they must be â€œbalancedâ€ even when the truth isnâ€™t balanced continues, alas, to ring true. The most recent example is the peculiar determination of some news organizations to cast the scandal surrounding Jack Abramoff as â€œbipartisan.â€

Krugman goes on to explain that Abramoff is a long-time “movement conservative” who gave money only to Republicans. “Thereâ€™s nothing bipartisan about this tale, which is all about the use and abuse of Republican connections.”

What about the claim that Abramoff “directed” tribes to give money to Democrats?

… the tribes were already giving money to Democrats before Mr. Abramoff entered the picture; he persuaded them to reduce those Democratic donations, while giving much more money to Republicans. A study commissioned by The American Prospect shows that the tribesâ€™ donations to Democrats fell by 9 percent after they hired Mr. Abramoff, while their contributions to Republicans more than doubled. So in any normal sense of the word â€œdirected,â€ Mr. Abramoff directed funds away from Democrats, not toward them.

Abramoff’s “guidance” caused his tribal clients to loosen long-time ties to Democrats. Yet “journalists” like Katie Couric and WaPo Deborah Howell report that the Abramoff scandal is “bipartisan,” and the fact that Abramoff gave money only to Republicans is just a small, unimportant technical detail.

More important, this kind of misreporting makes the public feel helpless. Voters who are told, falsely, that both parties were drawn into Mr. Abramoffâ€™s web are likely to become passive and shrug their shoulders instead of demanding reform.

So the reluctance of some journalists to report facts that, in this case, happen to have an anti-Republican agenda is a serious matter. Itâ€™s not a stretch to say that these journalists are acting as enablers for the rampant corruption that has emerged in Washington over the last decade. [emphasis added]

And, once again, that’s why I blog.