I doubt this was intentional — I just pulled this screen capture off Memeorandum: 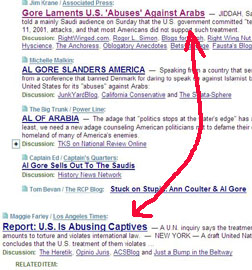 Two news items collide — at the top, a pack of righties attack Al Gore for speaking frankly to a mainly Saudi audience about mistreatment of Arabs in America after 9/11. Judging from the reaction of the righties, you’d have thought Al had announced his engagement to Osama bin Laden.

Among the headlines: “The Gorebot: attacking America from the fountainhead of jihad”; “Al of Arabia”; “Al Gore Slanders America” (that’s our gal Michelle Malkin); and “Al Gore Sells Out to the Saudis” (Captain Ed).

I got a kick out of the accidental juxtaposition, although to be fair the juxtaposed stories are about two different incidents of abuse. Of the first (from the Associated Press)—

Gore told the largely Saudi audience, many of them educated at U.S. universities, that Arabs in the United States had been “indiscriminately rounded up, often on minor charges of overstaying a visa or not having a green card in proper order, and held in conditions that were just unforgivable.”

Which is true — the bleeping U.S. Department of Justice issued a report admitting it’s true — and which I doubt was news to the audience. Righties seem to think that all “foreigners” are stupid and will not know anything about our treatment of them unless we explain it to them. But all human being appreciate not being treated like idiots. Mr. Gore’s talk probably did more to assure Arabs we can be honest and reasonable than all of Karen Hughes’s pathetic efforts combined.

(What makes this speech treasonous in rightie minds is that Al Gore delivered it to an Arab audience. These same people razz Gore for everything he says in this country, too, however. According to the Right, “Al Gore speaking” is, by definition, treasonous.)

Oh, and speaking of “the fountainhead of jihad,” the Associated Press reported Saturday (via Avedon) that

A company in the United Arab Emirates is poised to take over significant operations at six American ports as part of a corporate sale, leaving a country with ties to the Sept. 11 hijackers with influence over a maritime industry considered vulnerable to terrorism.

The Bush administration considers the UAE an important ally in the fight against terrorism since the suicide hijackings and is not objecting to Dubai Ports World’s purchase of London-based Peninsular and Oriental Steam Navigation Co.

And Republicans ask if we can trust Democrats to keep us safe from terrorism. Snort.

The second news story is about treatment of detainees at Guantanamo Bay. Maggie Farley of the Los Angeles Times writes,

A draft United Nations report on the detainees at Guantanamo Bay concludes that the U.S. treatment of them violates their rights to physical and mental health and, in some cases, constitutes torture.

It also urges the United States to close the military prison in Cuba and bring the captives to trial on U.S. territory, charging that Washington’s justification for the continued detention is a distortion of international law.

The report, compiled by five U.N. envoys who interviewed former prisoners, detainees’ lawyers and families, and U.S. officials, is the product of an 18-month investigation ordered by the U.N. Commission on Human Rights. The team did not have access to prisoners at Guantanamo Bay.

“We have fallen pretty far when the UN is lecturing us on our human rights violations,” says Steve Soto.

The UN Human Rights Commission report, due to be published this week, concludes that Washington should put the 520 detainees on trial or release them.

It calls for the United States to halt all “practices amounting to torture”, including the force-feeding of inmates who go on hunger strike.

Guards have begun strapping detainees into “restraint chairs” like the one pictured to the left, using riot-control soldiers to keep them still (no details on that), and forcing long plastic tubes down their nasal passages and into their stomachs. The tubes are inserted and removed so violently that prisoners bleed and pass out. Too much food is put in the tubes, which causes prisoners to defecate on themselves.

If you’re strapped into a “padded cell on wheels,” while a tube is forced down your nose, that means you’re no longer refusing meals.

This will sully America’s reputation for generations. Yet the righties are up in arms about Al Gore? Amazing.