The latest CBS News poll finds President Bush’s approval rating has fallen to an all-time low of 34 percent, while pessimism about the Iraq war has risen to a new high.

Excuse me while I dance about and pump my fist a few times.

The article goes on to say that Bush took a hit on the UAE port deal (7 in 10 Americans are opposed), and he’s still hurting from Katrina (2 out of 3 Americans say he hasn’t respond adequately). Regarding the port deal, whether the deal compromises national security or not, the way the Bushies handled the deal reveals a lot about what’s wrong with the Bush Administration. Thinking about the port deal inspired me to spend at least three minutes painstakingly and meticulously doodling the following flow chart: 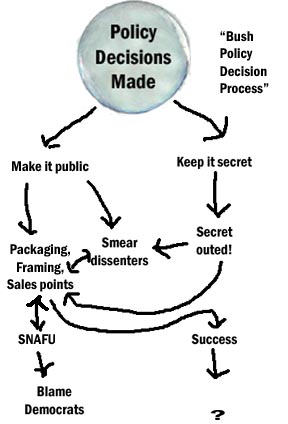 The “Bush Policy Decision Process” works as follows: First, the President and a small group of long-time advisers carefully chosen to agree with each other get together inside the bubble and decide on a policy. This is the easy part, especially since no one with expertise or a diverse point of view is allowed inside the bubble.

Next comes a critical decision: Should the White House make this policy known to Congress and the public, or should they keep it secret?

If they choose to make it public, the next step is packaging the policy. The packaging may or may not (probably not, truth be told) be representative of what the policy actually is; the point of the packaging is purely to maximize sales appeal. For example, the Bushies might decide on a policy of maxmimizing timber production in national forests because it would be good for the logging industry. The policy will be packaged as good for the forests. They’ll call it something like the “Healthy Forests Initiative.”

You’ll remember that Andy Card let it slip that the 2002 saber rattling over Iraq was a “marketing campaign.” Later we heard (from where? Maybe someone can remind me.) that the weapons of mass destruction argument was used to build support for invading Iraq because it was the most saleable argument, not because it was the actual reason. In any event, the Bushies have had to repackage the Iraq War at least two or three times, haven’t they?

Now, as part of the marketing campaign, all dissenting opinion must be suppressed. Therefore, anyone who argues against the policy is smeared and ridiculed by the VRWC. The more expertise and logical arguments dissenters might have against the policy, the harder they are smeared. Thanks to a compliant media, this has meant (until recently) most of the public never hears the opposing arguments, just that so-and-so who opposes the policy is an unhinged ultra-liberal Bush-hating Saddam lover who wants to destroy America.

So the policy goes into effect. What if it becomes obvious that the policy is failing? The Bushies go back to the “marketing/smearing” phase, repackage the policy, and issue fresh smears. At the same time, people who had been shut out of the policy-making process except to be allowed to rubber-stamp it (such as “Democrats”) will be blamed for the failure of the policy.

What happens if the policy becomes a resounding success? We haven’t reached that stage with any Bush policy, so anything we say would be speculative. Just thinking about what they might do gives me the willies, though.

If the Bushies choose the “keep it secret” option, and the policy is made public in spite of their best efforts to keep it secret, they switch over to the “marketing/smearing” plan, and the rest of the chart flows along as with the “make it public” option.

In the case of the UAE port deal, they seem to have gotten sloppy. They defaulted to the “keep it secret” procedure even though it wasn’t really secret. When the deal became public and the shit hit the fan, the Bushies hastily switched over to marketing/smearing, but by then they were behind the public opinion curve. And a lot of the people who got caught up in the smear campaign were long-time Bush administration supporters who were astonished at being called unhinged ultra-liberal Bush-hating Saddam lover who wants to destroy America, in so many words.

The Katrina disaster doesn’t fit into the flow chart anywhere, which is why the Bushies don’t know what to do about it. I’ve written before about the many times the Bushies are utterly confounded by problems they hadn’t foreseen, like power blackouts and hurricanes. But responding to an unexpected disaster that cannot be blamed on scarey swarthy foreigners it haaaard. It’s hard to get a good propaganda campaign going before people have already made up their minds the administration is screwing up. And if the disaster is domestic, people will notice fairly quickly that the administration’s efforts aren’t working. Mind-boggling ineptitude is easier to hide if it’s happening in another part of the world; like, say, Iraq.