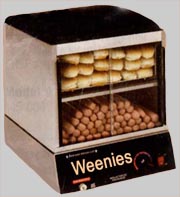 Today’s headlines — “Democrats Beat Quick Retreat on Call to Censure President“; “Feingold Draws Little Support for Censure“; “Democratic leaders shy away from censure plan” — tell the familiar story of one brave Dem sticking his neck out — for truth, justice, and the American Way — followed by the rest of the party running for the bomb shelters.

ReddHedd at firedoglake (which is having technical problems today, but it’s on this archive page somewhere) quoted this quote from Donna Brazile in today’s Roll Call (Subscription required):

The message from the left-leaning blogosphere is clear: Democrats should understand the real issue. The point is not censure or impeachment; it is Congress’s lack of oversight and its failure to hold anyone accountable for major mistakes or missteps. And especially, it’s about clearly misleading the American public. From faulty pre-war intelligence to the negligent response to Hurricane Katrina and the unjustified cost for Medicare prescription drug benefits, there has been no meaningful oversight by the GOP-controlled Congress. It is doubtful whether they would be willing to hear evidence against the president. While the Feingold resolution is not going anywhere given the full Republican control of Washington, D.C., a change in leadership in the fall would make this a ripe item for conversation and action in 2007 and beyond…. Oversight is a fundamental responsibility of Congress, which until the Republicans took over was a coequal branch of government. It’s long past time for the Republican Congress — and in particular the House and Senate Intelligence committees — to stop protecting the administration and start doing more to protect the American people. The 2006 political campaign season, which is under way across America, will truly come down to a test of wills. If my party’s leaders, whom I admire and respect, cannot figure out three things this electoral season that the GOP will use as wedge issues to distract and divide — Iraq, the war on terror and national security, and cultural issues like abortion and same-sex marriage — then my party finally will have earned its minority status.

A few days ago a commenter to Mahablog said, in effect, that reading about the awfulness of the Bush Administration is entertaining, but when are you going to do something to get rid of him? Well, here’s something we can do. We can support Russ Feingold by sending him our thanks. We can let our Democratic senators know we expect them to support Russ Feingold. We can send our senators the Donna Brazile quote by fax and email and carrier pigeon. We can promise them we have long memories.

And while you’re at it, help send Joe Lieberman into retirement and send a campaign contribution to Ned Lamont.

It’s happened again; another fragment broken loose from the brackish depths of secrecy has floated to the surface, and there for all the world to see is more proof that The Mess We’re In is not the fault of terrorists or biased news reporting or insurgents or France or Hillary Clinton’s anger and/or ambitions or playing blame games or bad message discipline or Democratic obstructionism or Michael Brown. It’s not the fault of polls or Iran or the UN or some freaky thing like the orbit of Earth around the Sun that no one could have anticipated. And you can’t blame Canada or the governor of Louisiana or Hollywood or gay marriage. Or sleep deprivation, for that matter.

This time what’s washed to shore are memos from a senior British diplomat named John Sawers, envoy to Baghdad in May and June 2003, who wrote his prime minister that the US administration of Iraq was “an unbelievable mess.”

“No leadership, no strategy, no coordination, no structure and inaccessible to ordinary Iraqis,” Mr. Sawer said.