President Bush said Wednesday that Saddam Hussein, not continued U.S. involvement in Iraq, is responsible for ongoing sectarian violence that is threatening the formation of a democratic government.

Saddam’s sending out evil brain waves from his prison cell. That must be it.

In his third speech this month to bolster public support for the war, Bush worked to counter critics who say the U.S. presence in the wartorn nation is fueling the insurgency. Bush said that Saddam was a tyrant and used violence to exacerbate sectarian divisions to keep himself in power, and that as a result, deep tensions persist to this day.

But … but … but … you told Tony Blair before the invasion that it was “unlikely there would be internecine warfare between the different religious and ethnic groups.”

D’you think you might have checked that a little more closely before ordering a bleeping invasion, genius?

And what the bleep happened to the bleeping era of responsibility?

Jack A. Abramoff, the once-powerful Republican lobbyist at the center of a major corruption scandal, was sentenced in Miami today to five years and 10 months in prison for his role in the fraudulent purchase of a fleet of casino cruise ships. An associate received the same sentence.

U.S. District Judge Paul C. Huck sentenced Abramoff, 47, and his former partner, Adam R. Kidan, 41, after considering their pleas for the shortest possible prison terms. Each laid most of the blame on the other for the scam, in which they faked a $23 million wire transfer to obtain financing for the 2000 purchase of SunCruz Casinos from an owner who was later shot to death in a gangland-style hit.

The maximum sentence was seven years six months. However, he’s yet to be sentenced on other charges, for fraud, tax evasion and conspiracy to bribe public officials. Abramoff pleaded guilty to those charges in January.

Ever wonder how it is that conservatives can go to Iraq and not see any violence? Well, now we know — they’ve been in the wrong country.

Will Bunch posted a photograph that Republican congressional candidate Howard Kaloogian (running for Duke Cunningham’s seat) claimed he had taken in Baghdad.

Turns out this photo is actually of a suburb of Istanbul.

Does this explain how, for example, Ralph Peters could travel all over Baghdad without so much as seeing smudged shoes or a hair out of place? Have the Bushies set up a Potemkin Baghdad village somewhere in Turkey to show off to visitors? I mean, we’ve heard for years the moon landings were faked. If you can fake the moon, you can fake Baghdad.

Of course, this might be just an honest mistake. So I created this handy-dandy guide to Middle East geography for Republicans: 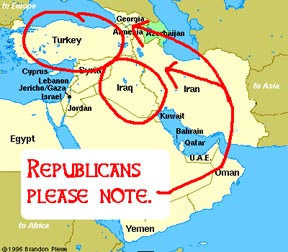 I’m just funnin’ with ya, righties. But those of you who think you’ve been to Iraq might want to check what’s stamped on your passport.

Update: Howard Kaloogian says he’s sorry about the photo. He’s sorry he didn’t “just” get back from Baghdad; he got back last year. And he didn’t “take” the “photo.” He doesn’t know who took it. He didn’t write the caption; some staffer wrote the caption. Maybe some staffer’s mother. Maybe elves. But he thinks people are being picky. 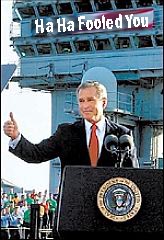 Since a March 27 New York Times article confirmed that a leaked British memo appears to contradict President Bush’s repeated claim prior to the U.S.-led invasion of Iraq that he wanted to avoid war, media have failed to note the full significance of the document and in some cases ignored the story altogether. For instance, major newspapers have yet to feature articles on the memo, and Fox News has not once mentioned the document. CBS and ABC have limited their coverage to several brief mentions of the story. And numerous other reports have failed to contrast the memo’s depiction of Bush with his public statements prior to the war.

After reminding us of some of Bush’s public statements that, um, diverge somewhat from what he was saying behind closed doors, Media Matters continues,

In light of these statements, the January 31 memo — and the Times‘ verification of it — is obviously significant. Nonetheless, numerous news outlets have failed to cover the story at all, or in some cases failed to cover it adequately. Fox News has ignored it entirely. A Media Matters for America survey of Fox’s full March 27 coverage (6 a.m.-11 p.m. ET) and partial March 28 coverage (6 a.m.-noon ET) failed to turn up a single mention of the memo.

Similarly, The Washington Post, Los Angeles Times, The Wall Street Journal, and USA Today all declined to run articles on the memo in their March 28 editions. Both the Associated Press and Reuters have failed to report on the story thus far. By contrast, United Press International ran two articles on March 27 — one on the memo and one on the White House’s reaction to the Times piece.

Televisions news wasn’t much better, although let it be noted that MSNBC, mostly through the reporting of Keith Olbermann (Olbermann transcript here) and David Shuster, “devoted the most airtime to the British memo and repeatedly emphasized its relevance.”

Getting back to the Triangle metaphor, what would happen if the progressive netroots, the Democratic establishment, and responsible media figures worked together to treat these two stories with the gravity and intensity they deserve? It would be a major political crisis. Sadly, the system is not in place, the coordination of the various components of the progressive message machine is lacking, and as we saw in the NSA fiasco, the trajectory of these stories is all too easy to predict.

So what we end up with is confirmation of the most dire concerns of the anti-war movement (i.e. that Bush was itching for war and was ready to do whatever necessary to provoke it), coupled with evidence that all the national – I hate the word ‘Homeland’ – security blather on the part of the administration since 9/11 is hot air; we’re as vulnerable as ever. Once again, impeachable offenses drifting into an endless stream of impeachable offenses, receding into oblivion…

Well, you go to war with the news media you have, so to speak. For what it’s worth, there are a couple of good op eds in newspapers today. At the Boston Globe, Derrick Jackson writes,

PRESIDENT BUSH said he invaded Iraq to rid the world of a madman. It is ever more clearer Bush went mad to start it.

This week, the New York Times reported on a confidential memo about a meeting between Bush and British Prime Minister Tony Blair on Jan. 31, 2003. It was just before Secretary of State Colin Powell would go before the United Nations to convince the world of the planetary threat of Iraqi dictator Saddam Hussein and ask for a second UN resolution to condemn him. …

… Powell’s punch line was, ”Every statement I make today is backed up by sources, solid sources. These are not assertions.”

But Bush already realized the sources were not panning out.

Suggestion: Print out the Media Matters story linked above, which provides a timeline of what Bush said and when, and put it alongside Derrick Jackson’s op ed. Jackson continues,

Even though his growing fears about finding no weapons of mass destruction had reached the incredible point of considering fakery to make it look like Saddam started the war, Bush had the gall to go before the press on Jan. 31 after his meeting with Blair and show no doubt. A reporter asked Bush, ”Mr. President, is Secretary Powell going to provide the undeniable proof of Iraq’s guilt that so many critics are calling for?”

Bush responded, ”Well, all due in modesty, I thought I did a pretty good job myself of making it clear that he’s not disarming and why he should disarm. Secretary Powell will make a strong case about the danger of an armed Saddam Hussein. He will make it clear that Saddam Hussein is fooling the world, or trying to fool the world. He will make it clear that Saddam is a menace to peace in his own neighborhood. He will also talk about Al Qaeda links, links that really do portend a danger for America and for Great Britain, anybody else who loves freedom.”

Powell would deliver on Bush’s boast five days later, saying, ”There can be no doubt that Saddam Hussein has biological weapons and the capability to rapidly produce more, many more. . . . With this track record, Iraqi denials of supporting terrorism take their place alongside the other Iraqi denials of weapons of mass destruction. It is all a web of lies.”

Bush wasn’t being fooled by bad intelligence. He knew that WMDs were not being found, and didn’t care. Jackson continues,

The web spun by Bush has now cost the lives of 2,300 US soldiers, another 200 British and coalition soldiers, and tens of thousands of Iraqi civilians. Iraq is closer to civil war than stability. Three years later, it is the United States that is not disarming, with Bush admitting last week that our troops will be needed there past his presidency. We took out a madman with madness. At a minimum, there should be hearings, with Bush under oath. With any more details like this, the next step is impeachment.

This is from an editorial in today’s Seattle Post-Intelligencer,

In the first months of 2003, we joined much of the rest of the world in hopes that war with Iraq could be avoided, that a diplomatic breakthrough or confirmation of reports that Saddam Hussein possessed no weapons of mass destruction might render the military option unnecessary.

How silly of us.

A confidential memo recording a Jan. 31, 2003, Oval Office meeting between President Bush and British Prime Minister Tony Blair makes it clear that the two men were going to war in Iraq in any event. …

…The memo is stark evidence that it was a war of choice — a choice that had been made early on.

So far, that’s all the newspaper commentary I’ve found.

Earlier this week, as blogs linked to and discussed the memo story, someone on the Right introduced a “we already knew this” meme. This was frantically picked up and repeated by the usual tools. But the sad fact is that the righties not only did not know this, they still don’t know it. They’ve got their eyes shut and their ears plugged and they’re screaming LA LA LA LA LA I CAN’T HEAR YOU as loudly as they can. Not one rightie commenter was able to acknowledge what actually went on between Bush and Blair. I suspect they couldn’t see it if you printed it in

and rubbed their noses in it.

In fact, the invasion of Iraq may prove to be among the most critical “turning point” events in American history, right up there with the assault on Fort Sumter and the Watergate break-in. I believe it will prove to have greater long-range significance than 9/11. Iraq may be our Icarus moment, the beginning of the end of America as World’s Biggest Superpower. Centuries from now, assuming civilization as we know it survives, historians will still be writing about Bush’s insane invasion of Iraq, the same way they’re still writing about Napoleon’s retreat from Russia and the fall of the Roman Empire.

Yet American news media still refuse to see the insanity. Come to think of it, lots of Romans didn’t notice their empire was falling, either.

(Cross-posted to The American Street)