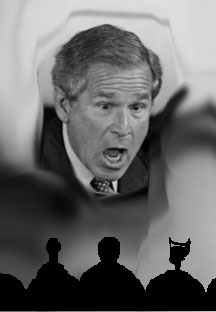 Oh, I realize he’s still capable of considerable mischief, like launching a global thermonuclear war. But these days there’s something so pathetic about him it’s hard to take him seriously.

On North Korea, rather than coming off as an assertive leader, Bush spoke meekly about what has so far been a failed and listless diplomatic effort. On Iraq, his rhetoric was familiar and unlikely to stanch the loss of public support for the war. Even his formerly dependable warnings about threats to the nation’s security lacked authority amid the growing doubts about whether his approach to the war on terror is working.

Pressed to defend his foreign policy, Bush instead cited the “stakes” involved in the Middle East and North Korea — 13 times.

“I understand the stakes,” Bush announced. “I’m going to repeat them one more time. As a matter of fact, I’m going to spend a lot of time repeating the stakes.”

He made good on that promise. Five times he said “the stakes are high,” occasionally adding that “the stakes are really high” and even that, “as a matter of fact, they couldn’t be higher.”

“I know this sounds [as if] I’m just saying it over and over again,” Bush admitted. But repetition is crucial to learning; to that end, Bush also said four times that the enemy is trying to establish a “caliphate.”

There’s been considerable hoo-hawing about Bush’s use of the word caliphate, btw, and some speculate it will replace Islamofascist as the preferred term for Our Enemy. But Bush’s larger problem is that he’s out of red herrings. His Administration is such a disaster that there’s no issue he can use to distract attention from another; it’s all bad out there. He’s been reduced to comments on reporters’ wardrobes.

I wrote yesterday about how the White House is leaking to cover Bush’s butt on North Korea. Today Helen Thomas describes how long-time Bush family consigliere James Baker is maneuvering to get Junior off the hook about Iraq, too. Pathetic, I say.

It’s not just that Bush’s approval ratings are drifting south again. These days, what ground Bush has left to stand on is pretty shaky. Not only are some Republican candidates distancing themselves from their own party, but even white religious voters and suburbanites are backing away from the GOP. And the GOP itself seems to be in self-destruct mode.

But hold the celebration. First, elections have a way of, um, surprising us these days, and Bush will keep his butt covered and retain operational capabilities as long as Republicans control Congress. And what Digby says scares the stuffing out of me:

If and when we manage to take back one or both houses of congress get prepared to relive those glory days of the 90’s, when the Republicans acted like raving lunatics and braindead losers like Chris Matthews blamed it all on the Democrats.

It is going to be as if the Bush years never happened. All this unpleasantness will be disappeared and we will begin anew with a horrible fiscal situation, a terrible global situation, a hopeless military situation which will be laid squarely at the feet of the “lefties” by “smart, grown-up Republicans,” the shrieking rightwing harpies and their close relatives the robotic codpiece-worshipping pundits. Oy.

Folks, taking Congress away from the GOP (assuming we do) is just the beginning of the fight. Although Bush is still a concern, never forget that the real danger to democracy comes from the VRWC, not Bush. And they’ll still be around when Bush is gone.

President Bush finds the world around him increasingly “unacceptable.”

In speeches, statements and news conferences this year, the president has repeatedly declared a range of problems “unacceptable,” including rising health costs, immigrants who live outside the law, North Korea’s claimed nuclear test, genocide in Sudan and Iran’s nuclear ambitions.

Bush’s decision to lay down blunt new markers about the things he deems intolerable comes at an odd time, a phase of his presidency in which all manner of circumstances are not bending to his will: national security setbacks in North Korea and Iraq, a Congress that has shrugged its shoulders at his top domestic initiatives, a favorability rating mired below 40 percent.

But a survey of transcripts from Bush’s public remarks over the past seven years shows the president’s worsening political predicament has actually stoked, rather than diminished, his desire to proclaim what he cannot abide. Some presidential scholars and psychologists describe the trend as a signpost of Bush’s rising frustration with his declining influence.

Get used to it, Sweetums.