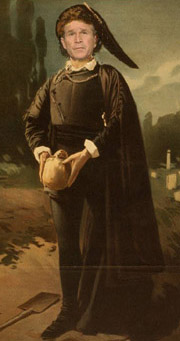 Richard Holbrooke has some advice for Dear Leader:

Broadly speaking, you have three choices: “Stay the course,” escalate or start to disengage from Iraq while pressing hard for a political settlement. I will argue for the third course, not because it is perfect but because it is the least bad option.

In your radio address last week, you said that “our goal in Iraq is clear and unchanging: . . . victory.” You added that the only thing changing “are the tactics. . . . Commanders on the ground are constantly adjusting their approach to stay ahead of the enemy, particularly in Baghdad.” One can only hope that you do not mean those words literally — or believe them. “Stay the course” is not a strategy; it is a slogan, useful in domestic politics but meaningless in the field.

Your real choice comes down to escalation or disengagement. If victory — however defined — is truly your goal, you should have sent more troops long ago. You and Defense Secretary Donald Rumsfeld say that the commanders in Iraq keep telling you they don’t need more troops, but, frankly, even if technically accurate, this is baffling. Plain and simple, there are not, and never have been, enough troops in Iraq to accomplish the mission.

I say “victory” is just a slogan, also, when applied to Iraq. In conventional war, “victory” is what happens when the enemy government unconditionally surrenders. But what is “victory” when there is no government to surrender? The truth is that terrorist and insurgent leaders don’t surrender, and even if they did, their cause will not surrender with them. New leaders will arise, and the war will go on.

But where would more troops come from? The Pentagon says the all-volunteer Army is stretched to the breaking point; it is now recruiting 42-year-olds and lowering entry standards. Afghanistan also needs more troops. And suppose additional troops do not turn the tide? Does the United States then send still more? Even advocates aren’t sure escalation will produce a turnaround.

Many have commented on the disconnect between Bush’s “Churchillian” rhetoric about Iraq and his half-assed policies in Iraq. Robert Freeman wrote recently that

The lies of Iraq have left a growing, cancerous legacy of doubt, shame, and revulsion in the American psyche. The symptoms can only be suppressed through the contrivance of ever more desperate lies. Witness, for example, the current lie that Iraq is a battle â€œfor the survival of Western Civilization,â€ juxtaposed with another current lie, that it is a â€œcommaâ€ in the unfolding of the modern Middle East. Which is it? Of course, it is neither but just as surely, it cannot possibly be both. But that is the problem that liars create for themselves when their lies begin to unravel.

The fragility of the Iraq Warâ€™s rationale â€” and its consequent collapse â€” is revealed in the fact that Bush could ask no sacrifice of the nation to fight it, for if there was any pain to be borne, people might look harder at the justification.

There were many rationalizations for invading Iraq; control of oil and neocon fantasies of global American hegemony among them. But I suspect for Bush the Iraq War was supposed to be the main backdrop of his glorious presidency. He was looking forward to six full years of prancing around on the deck of the U.S.S. Abraham Lincoln in his flight suit. The hard fact is that our troops are dying because George W. Bush is too big a weenie to face the reality that war isn’t a backdrop. As long as he can still act out his “war president” fantasies, he’s not going to call for a scene change.

The last option is the most difficult for an embattled wartime president: Change your goals, disengage from the civil war already underway, focus maximum effort on seeking a political power-sharing agreement, and try to limit further damage in the region and the world.

That is the only course left to us.

I urge you to lay out realistic goals, redeploy our troops and focus on the search for a political solution. … In recent years, almost any advocate of a change in policy has been accused of wanting to “cut and run.” Such rhetoric works against the bipartisanship that this crisis requires. But if you were to decide to draw down American troops — without a fixed timetable — and seek a political compromise, the responsible leadership of the Democratic Party would surely work with you, especially if the Iraq Study Group, co-chaired by James Baker and Lee Hamilton, recommends significant changes in policy, which you could use as a starting point for rebuilding a bipartisan national consensus.

Bush will not take this advice as long as he has power. He can no more “change the course” than he can fly.

But what about the Baker commission? I think this editorial in today’s Pittsburgh Post-Gazette gets it:

The American public needs to be very wary of leaks seeping from the so-called Baker commission on the Iraq war. It is possible, given the timing, that the winks and nudges coming from the commission now represent an effort by White House Republicans to suggest to voters that the Bush administration is considering changes in its Iraq war policy, the GOP’s principal losing card in the upcoming elections. …

… We’ve said the commission could be a good thing if it nudges the nation’s war policy in the right direction, but someone with Mr. Baker’s political savvy is still up to throwing curve balls to the electorate to try to prevent the Republicans from losing one or both houses of Congress next month. He was very much the Republicans’ “go to” guy in August 1992 when then President George H.W. Bush was losing his re-election effort. Mr. Baker was called into the fray again in Florida in 2000 when son George W. Bush was faced with a popular vote nationally in favor of Vice President Al Gore and a sticky vote-count situation in Florida.

Billmon skewered Baker’s commission a couple of days ago. Again, there will be no substantive changes in the “course” in Iraq as long as Bush has anything to say about it. Eugene Robinson writes,

The truth is that “the job,” to the extent that Bush has been able to define it, almost certainly will never get done. The question is how many more American and Iraqi lives will be lost before the president admits it, drops all the bluster and acknowledges what Americans already know: “I made a mistake.”

I’m saying never. His lips will fall off first.

Of course, the act is getting old. Niall Ferguson writes in “America’s Brittle Empire“:

Thursday, the spokesman for the U.S. military command in Iraq confessed that the Army’s latest effort to quell the escalating civil war in central Iraq “has not met our overall expectations of sustaining a reduction in the levels of violence” â€” military-speak for “has totally failed.” A year ago, these admissions would have been headline news. Today, people just shrug. That Iraq is Washington’s new “quagmire” has become conventional wisdom.

The Prince has shown some willingness to change his lines, if not the scenery. Peter Baker writes in today’s Washington Post:

… the White House is cutting and running from “stay the course.” A phrase meant to connote steely resolve instead has become a symbol for being out of touch and rigid in the face of a war that seems to grow worse by the week, Republican strategists say. Democrats have now turned “stay the course” into an attack line in campaign commercials, and the Bush team is busy explaining that “stay the course” does not actually mean stay the course.

Instead, they have been emphasizing in recent weeks how adaptable the president’s Iraq policy actually is. Bush remains steadfast about remaining in Iraq, they say, but constantly shifts tactics and methods in response to an adjusting enemy. “What you have is not ‘stay the course’ but in fact a study in constant motion by the administration,” Snow said yesterday.

Of course, “changing tactics” can mean anything. He’s not changing strategy — one might argue there is no strategy to change — and he hasn’t changed goals, whatever those are.

By last week, it was no longer a quarter right. “Listen, we’ve never been stay the course, George,” he told George Stephanopoulos of ABC News. “We have been — we will complete the mission, we will do our job and help achieve the goal, but we’re constantly adjusting the tactics. Constantly.”

Snow said Bush dropped the phrase “because it left the wrong impression about what was going on. And it allowed critics to say, ‘Well, here’s an administration that’s just embarked upon a policy and not looking at what the situation is,’ when, in fact, it’s just the opposite.”

Republican strategists were glad to see him reject the language, if not the policy. “They’re acknowledging that it’s not sending the message they want to send,” said Steve Hinkson, political director at Luntz Research Cos., a GOP public opinion firm. The phrase suggested “burying your head in the sand,” Hinkson said, adding that it was no longer useful signaling determination. “The problem is that as the number of people who agree with remaining resolute dwindles, that sort of language doesn’t strike a chord as much as it once did.” …

In other words, Bush’s act is the same old soft shoe. He’s just changed some of the jokes.

As Mr. Holbrooke says, there’s really only one rational direction for Iraq, and that’s out. And I think everyone but the Bushies knows that. We might disagree exactly how to get out, or how long to take to get out, but there’s no point discussing anything else but “out” now.

9 thoughts on “For Bush, the Show Must Go On”