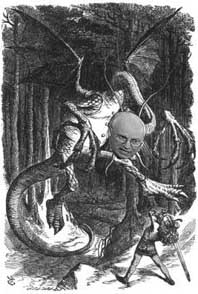 â€“ â€œVice President Cheney himself directed Scooter Libby to essentially go around protocol and deal with the press and handle press himselfâ€¦to try to beat back the criticism of administration critic Joe Wilson.â€

â€“ Cheney personally â€œwrote out for Scooter Libby what Libby should say in a conversation with Time magazine reporter Matt Cooper.â€

Norah O’Donnell is asking Andy Card and Leon Panetta if the president is going to have to ask Dick Cheney to resign as a result of what’s being alleged at the Libby Trial. (They both punted.)

And just think — Dick the Dick is supposed to show up and sit next to Nancy Pelosi at the SOTU tonight. Wheeee!

3 thoughts on “Slaying the Jabberdick”