I don’t know if Iranian president Mahmoud Ahmadinejad is worried about us, but we’re scaring the socks off Europe. Ian Traynor and Jonathan Steele write for the Guardian:

Senior European policy-makers are increasingly worried that the US administration will resort to air strikes against Iran to try to destroy its suspect nuclear programme.

As transatlantic friction over how to deal with the Iranian impasse intensifies, there are fears in European capitals that the nuclear crisis could come to a head this year because of US frustration with Russian stalling tactics at the UN security council. “The clock is ticking,” said one European official. “Military action has come back on to the table more seriously than before. The language in the US has changed.”

As the Americans continue their biggest naval build-up in the Gulf since the start of the Iraq war four years ago, a transatlantic rift is opening up on several important aspects of the Iran dispute.

The Bush administration will shortly publish a dossier of charges of alleged Iranian subversion in Iraq. “Iran has steadily ramped up its activity in Iraq in the last three to four months. This applies to the scope and pace of their operations. You could call these brazen activities,” a senior US official said in London yesterday.

Although the Iranians were primarily in Shia areas, they were not confined to them, the US source said, implying that they had formed links with Sunni insurgents and were helping them with booby-trap bombs aimed at Iraqi and US forces, new versions of the “improvised explosive devices”.

Let’s say I’m way skeptical the Iranians would be helping the Sunnis. This would work against their own interests, assuming that their interest is to make Iraq a Shia-controlled nation.

… diplomats in Brussels and those dealing with the dispute in Vienna say a fissure has opened up between the US and western Europe on three crucial aspects – the military option; how and how quickly to hit Iran with economic sanctions already decreed by the UN security council; and how to deal with Russian opposition to action against Iran through the security council.

Also at the Guardian, Francis Fukuyama chides his former comrades-in-neoconism.

Neoconservative theorists saw America exercising a benevolent hegemony over the world, using its enormous power wisely and decisively to fix problems such as terrorism, proliferation, rogue states, and human-rights abuses. But even if friends and allies were inclined to trust America’s good intentions, it would be hard for them not to be dismayed at the actual execution of policy and the amount of broken china this particular bull left behind. …

… What I find remarkable about the neoconservative line of argument on Iran, however, is how little changed it is in its basic assumptions and tonalities from that taken on Iraq in 2002, despite the momentous events of the past five years and the manifest failure of policies that neoconservatives themselves advocated. What may change is the American public’s willingness to listen to them.

Francis Fukuyama seems to have learned a few things since he wrote that “end of history” claptrap back in the 1980s. In his Guardian op-ed he admits that the use of force in Iraq has been counterproductive and that “preventive war” is not a sustainable foreign policy. It’s actually worth reading.

Speaking of war and idiots — here’s another headline to love: 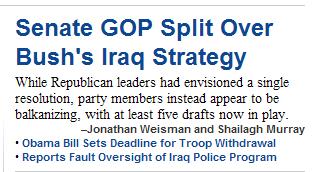 Whatever happened to Democrats being split on Iraq War strategy? Hmmm?

The story, by Jonathan Weisman and Shailagh Murray, is in today’s Washington Post.