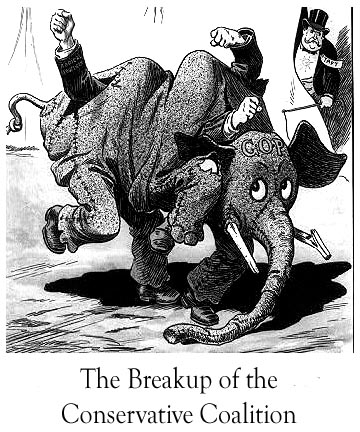 For some reason I’m on a mailing list called “Conservative News.” I have requested a couple of times to be taken off the list, but somebody keeps signing me up again. Anyway, today, “Conservative News” is announcing “The Conservative Exodus Project.”

I am copying and pasting this from the Exodus web page. Make of it what you will.

We, the undersigned, petition the Republican Party to support real conservative candidates for the 2008 presidential nomination.

In the belief that the Republican Party has become too liberal, we pledge, unless a suitable candidate is selected for the GOP 2008 presidential nomination, to stay home or vote third party (e.g. Constitution Party).

Returning to its liberal roots, the GOP has recently become the party of big business, neoliberal globalism, and unwise interventionism – not the party of conservatism.

Unless a candidate is chosen who is tough on immigration (e.g. Ron Paul, Tom Tancredo, Duncan Hunter, or another candidate yet to announce), we shall have no choice but to vote third party.

(1) We oppose the third-world invasion of the United States, and reject amnesty and any path to citizenship for illegals. We support deportation, attrition, and massive reductions in legal immigration, especially from the third world.

(2) We oppose free trade, the support of which has become an ideological suicide pact. Free trade is both destroying our economy and undermining our sovereignty. Historically, conservatives have opposed free trade, and they should, but many in the GOP have been “neoconned” on this issue.

(3) We support a moral candidate, critical of secularism, who embodies the virtues of the Christian Western tradition.

(4) We oppose the illegal neocon war in Iraq. The transformation of the Middle East to liberal democracy is Jacobin, not conservative.

(5) We wish to see big government reduced in size – in all three branches – and for many offices and functions to be returned to the states, where they Constitutionally belong.

Unless the above criteria are met, we pledge to stay home or vote third-party in 2008.

Point #4 is especially fascinating — “The transformation of the Middle East to liberal democracy is Jacobin, not conservative.” “Conservative News” needn’t worry; the Middle East is more likely to be transformed into an Islamic theocracy than anything else.

Granted, “Conservative News” may be one old curmudgeon and not a mighty hoard. But this isn’t too far away from the stuff Richard Viguerie has been cranking out lately.

BTW, the elephant art is from a 1911 Puck cover. The fellow in the top hat in the background is President Taft. In 1912 Republicans renominated Taft, after which Theodore Roosevelt cut his ties to the GOP and became the Progressive Party nominee for President. This split Republican votes and enabled the election of the Democrat, Woodrow Wilson.