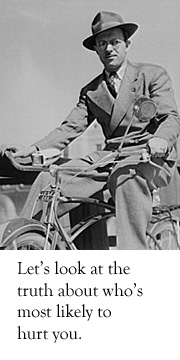 In the wake of today’s horrific shootings at Virginia Tech, some on the Right are calling for looser gun control laws. Although Virginia itself is one of the least restrictive states in the Union regarding guns, the campus was supposed to be a “gun-free” zone.

“Just imagine if students were armed,” writes one. “We no longer need to image what will happen when they are not armed.”

I got to that site from a link on Michelle Malkin’s blog, who quotes one of her readers: “Imagine if sensible CCW [concealed carry weapons] laws allowed people to defend themselves, this tragedy could have been avoided.”

Gun enthusiasts (they do take offense if you call them “gun nuts”) have a pure and transcendent faith that those states that allow citizens to carry concealed weapons for their own protection have enjoyed a dramatic drop in crime. Some of these states have seen a drop in the rate of violent crime, but so have states with stricter gun control laws that don’t allow citizens to carry a concealed weapons. Violent crime rates have been dropping all over for the past several years.

For example, Texas, which has allowed concealed carry of weapons since 1995, has a murder/manslaughter rate (per 100,000 inhabitants) of 6.2 and a forcible rape rate of 37.2. Gun-unfriendly New York state has a murder/manslaughter rate of 4.5 and forcible rape rate of 18.9 (FBI, 2005). But, as I said, if you were to compare two other states you might see something very different. There are just too many variables affecting crime rates to say categorically that any particular gun law makes any measurable difference.

That said, if you want an argument for not allowing concealed carry of weapons, just check out Michelle’s previous post. Her theme today is that black people are scary and cause crime. Her link for “the truth about black crime rates” leads to this utterly reprehensible article by a Heather Mac Donald which says, in effect, we can’t blame the NYPD for shooting and killing innocent black men by mistake, since black crime rates are so high.

Her example is Sean Bell, a young man who was gunned down by NYPD last year as he left his own bachelor party. Ms. Mac Donald takes umbrage at the suggestion that the NYPD are “trigger-happy racists.” The neighborhood was a high-crime area, she says, and Mr. Bell and his companions were behaving erratically (having just left a bachelor party, remember).

Mr. Bell was not wanted for a crime and was not armed at the time of his death. He was killed for celebrating while black, in other words.

It is true that African Americans commit violent crimes at a higher rate than whites. But Did You Know that if you are ever murdered or assaulted, the odds are that your murderer/attacker will be the same race you are, whatever that is?

A stroll through the Department of Justice, Bureau of Justice Statistics, can tell us a lot about people who commit crimes. For example, renters commit more crimes than homeowners. Women are considerably more likely than men to be murdered by a current or former spouse or lover, especially in rural areas. Next time some farmer’s wife offs her husband, she should use that statistic in her defense.

I’m sure if we kept looking we would find correlations between income, level of education, and several other factors and crime rates. I found a study that claimed children who went to high-quality preschools are less likely to become violent criminals than those who don’t. Information like this is useful if you’re trying to figure out ways to reduce crime.

But when you’re dealing with an individual, you need to look at an individual. It is simply not true that every black man is more dangerous than any white man. Serial killers are nearly always white men, for example.

Which takes us back to gun laws. The NYPD has a sorry history of killing black men who weren’t doing anything wrong. And the cops get training; they get guidelines; they have a chain of command. And they make mistakes. Wouldn’t yahoos carrying concealed weapons to deter crime make mistakes, too? How many mistakes are we willing to tolerate in the name of “safety”?

If someone wants to keep a firearm in his home or behind the counter of his convenience store that’s his business. But people who are frightened or excited make bad judgments. If Virginia Tech students had been armed today, would there be fewer dead? Or more? I think either is possible.

If someone wants to keep a gun in his home or behind the counter of his convenience store for protection, that’s his business. I’ve said many times that if I lived in some isolated cabin in Montana I’d keep a loaded shotgun on the wall, too. But the world is full of guys with Rambo fantasies and poor impulse control. The thought of those guys carrying concealed weapons does not make me feel safer.

On a related note — MSNBC and CNN keep saying that today’s shooting is the “worst massacre” or “worst mass shooting” in American history. It isn’t. If you stipulate “worst massacre/mass shooting with one perpetrator,” then maybe. But there have been many worse massacres with multiple perpetrators. For example, there was a nasty little episode in 1866, in New Orleans. At least 48 men at a peaceful meeting — mostly black men, btw — died at the hands of a gang of white men who broke into the room and started shooting. More than a hundred more were wounded. There were reports that some of the dead were executed after they were found hiding in closets and under floor boards. That counts as a worse mass shooting than today’s tragedy, I’d say.

There have been a number of worse mass killings than that, although all the ones I can think of involved multiple means of killing, such as fires or axes. Wounded Knee might not count because it was called a “battle” even though most of the 300 Sioux killed by soldiers were unarmed and unable to defend themselves.

Of course we all hurt because of what happened today, and I’m not saying the shootings at Virginia Tech were less terrible than past incidents. I just want to set the record straight.