As Nico Pitney says, the crackup is in full display.

In a sign of the growing fissure between the White House and its congressional allies over the war, NBC News reports tonight that 11 Republican members of Congress pleaded yesterday with President Bush and his senior aides to change course in Iraq.

The group of Republicans was led by Reps. Mark Kirk (R-IL) and Charlie Dent (R-PA), and the meeting included Defense Secretary Robert Gates, Secretary of State Condoleezza Rice, Karl Rove, and Tony Snow. One member of Congress called the discussion the â€œmost unvarnished conversation theyâ€™ve ever had with the president,â€ and NBCâ€™s Tim Russert said it â€œmay have been a defining pivotal momentâ€ in the Iraq debate.

According to Tim Russert of NBC, one of the congressmen flat out told Bush he has no credibility.

Also, check out this video from VoteVets.org.

Update: Details of the new Iraq Accountability Act that may be voted on in the House this week.

This is from an article by Jebediah Reed about wild card Dem presidential candidate Mike Gravel.

Beaming after the Columbia event, Gravel walks with Alter to a nearby Cuban restaurant for a late lunch. On the way they encounter a gray-haired gentleman in owlish glasses. Alter greets him very respectfully. “This is Tom Edsall,” he says. Edsall was a senior political writer for the Washington Post for 25 years. He retired from the paper in 2006 and now writes for the New Republic and teaches at Columbia Graduate School of Journalism.

Gravel smiles broadly and says, “Hey, can you straighten out David Broder?” Broder, an influential columnist at the Post and the unofficial godfather of the D.C. press corps, has been a target of much criticism from liberal blogs for seeming to provide political cover for Bush on Iraq, even with a majority of Americans now opposing the war. “He doesn’t believe in the power of the people!” Gravel says. Edsall blinks and looks perplexed. “David Broder is the voice of the people,” he replies matter-of-factly. Gravel starts to smile, assuming Edsall is making an absurdist joke. But Edsall is not joking. The two men look at each other in awkward silence over a great gulf of unshared beliefs, then Gravel chuckles and walks ahead into the restaurant.

Of course David Broder is the voice of the people. 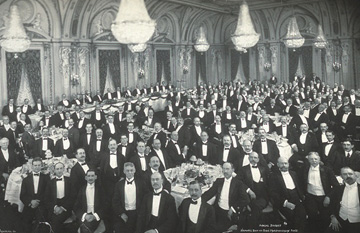 A “short leash” Iraq funding bill could come to a vote in the House as early as tomorrow. Karen DeYoung and Jonathan Weisman report for the Washington Post:

A House Democratic proposal introduced yesterday that would give President Bush half of the money he has requested for the war effort, with a vote in July on whether to approve the rest, hinges on progress in meeting political benchmarks that Iraq has thus far found difficult to achieve. …

…The plan would make about $43 billion of the administration’s requested $95.5 billion immediately available to fund the wars in Iraq and Afghanistan, train troops from both nations and pay for other military needs. Congress’s approval of the rest, intended to last through September, would await Iraqi passage of restructuring laws, or Bush’s ability to prove that significant progress had been made. The July vote would mark the first time a mandatory funding cutoff would come before Congress.

The article doesn’t hold out much hope that Senate Dems will go along with this, but the Post has been wrong before.

Today the President let it be known that he would veto the new House bill, too even though it makes considerable money immediately available to him with no strings attached. From the Washington Post:

Speaking to reporters aboard Air Force One, Snow said of the bill: “There are restrictions on funding and there are also some of the spending items that were mentioned in the first veto message that are still in the bill.”

Those “spending items” include provision for equipping state National Guard at pre-Iraq War levels. Note that the House bill does not include a timetable or any restrictions on the U.S. military; the demands it makes are specific and apply to the Iraqi government.

I don’t think he can hold his caucus together on this veto. I’m not saying the GOP would override his veto, but there will be a lot more defections.

And that’s the point. Over the past several days I’ve argued several times (most recently here) that a bill-by-bill, vote-by-vote process that peels congressional Republicans away from Bush is the only chance we’ve got to end the war before 2009. The point is to render him so isolated and unsupported he’ll have to either comply or leave office. I think this “short leash” approach has a shot of picking up substantial Republican support, because I think Republicans who face re-election next year are becoming increasingly frantic that the war will cost them their seats. Even if this bill doesn’t draw a veto-proof majority, the next one might, or the one after that. There are a number of Iraq War votes to come before Congress before the end of the year.

Note that the public overwhelmingly disapproved of Bush’s veto of the last bill.

House Speaker Nancy Pelosi (D-Calif.) is threatening to take President Bush to court if he issues a signing statement as a way of sidestepping a carefully crafted compromise Iraq war spending bill.

Pelosi recently told a group of liberal bloggers, â€œWe can take the president to courtâ€ if he issues a signing statement, according to Kid Oakland, a blogger who covered Pelosiâ€™s remarks for the liberal website dailykos.com.

â€œThe president has made excessive use of signing statements and Congress is considering ways to respond to this executive-branch overreaching,â€ a spokesman for Pelosi, Nadeam Elshami, said. â€œWhether through the oversight or appropriations process or by enacting new legislation, the Democratic Congress will challenge the presidentâ€™s non-enforcement of the laws.â€

I say again that Bush will accept no constraints whatsoever, no matter how mild and reasonable, no matter what public opinion says. The question is, can he keep this game up for 20 more months?

Word is spreading on the Right like wildfire that Rudy Giuliani freely and of his own volition made several contributions to Planned Parenthood in the 1990s. Apparently a “rival campaign” got this information from Rudy’s old tax returns and leaked it. To the Right, supporting Planned Parenthood is worse than admitting to being a Communist devil worshiper.

Two points: First, the returns in question were filed jointly with Mrs. Giuliani #2, Donna Hanover. Rudy’s probably going to say the contributions were hers, not his. Second, Planned Parenthood is a great organization on the front lines of the fight for reproductive rights. By providing birth control they probably prevent more abortions than they perform, but of course righties are too thick to understand that.

Word is also spreading, although more slowly, that Fred Thompson is on record of supporting legal abortion in all circustances in the first trimester. (I suspect Fred’s supporters want to elect the character he plays on Law and Order, not Fred himself.)

Of course, St. Ronald of Blessed Memory managed to straddle the pro v. anti choice fence nicely by speaking out loudly against legal abortion but not actually doing anything to stop it when he was Governor or President. Before the Alzheimer’s got him I ‘spect he was smarter than he let on.

For months, Gov. Kathleen Sebelius of Kansas and other governors have warned that their state National Guards are ill-prepared for the next local disaster, be it a tornado a flash flood or a terroristâ€™s threat, because of large deployments of their soldiers and equipment in Iraq and Afghanistan.

Then, last Friday night, a deadly tornado all but cleared the small town of Greensburg off the Kansas map. With 80 square blocks of the small farming town destroyed, Ms. Sebelius said her fears had come true: The emergency response was too slow, she said, and there was only one reason.

â€œAs you travel around Greensburg, youâ€™ll see that city and county trucks have been destroyed,â€ Ms. Sebelius, a Democrat, said Monday. â€œThe National Guard is one of our first responders. They donâ€™t have the equipment they need to come in, and it just makes it that much slower.â€

For nearly two days after the storm, there was an unmistakable emptiness in Greensburg, a lack of heavy machinery and an army of responders. By Sunday afternoon, more than a day and a half after the tornado, only about half of the Guard troops who would ultimately respond were in place.

In a nutshell, the governors of several states have been trying to get the White House’s attention on this matter for months, and they’ve been ignored. The needed equipment and personnel did get to Greensburg eventually, but the response was much too slow. When people are buried under rubble or need rescuing from rising flood waters, response time is critical. “Eventually” is not good enough.

The issue is not confined to Kansas.

In Ohio, the National Guard is short of night vision goggles and M-4 rifles, said a Guard spokesman, Dr. Mark Wayda. â€œIf we had a tornado hit a small town, we would be fine,â€ Dr. Wayda said. â€œIf we had a much larger event, that would become a problem.â€

The California National Guard is similarly concerned about a catastrophic event. â€œOur issue is that we are shortchanged when it comes to equipment,â€ said Col. Jon Siepmann, a spokesman for the Guard in California. â€œWe have gone from a strategic reserve to a globally deployable force, and yet our equipment resources have been largely the same levels since before the war.â€

In Arkansas, Gov. Mike Beebe a Democrat, echoed the concerns of Ms. Sebelius. â€œWe have the same problem,â€ Mr. Beebe said. â€œWe have had a significant decrease in equipment traditionally afforded our National Guard, and itâ€™s occasioned by the fact that itâ€™s been sent to the Middle East and Iraq.â€

Today on the Right Blogosphere, a number of bloggers are using highly cherry picked facts to pretend there’s no problem at all. If someday they are the ones buried under rubble and waiting far too long for rescue, however, I suspect they would reconsider.

Perhaps people who have never themselves lived through a real disaster — natural or otherwise — simply can’t think past the disaster itself to understand that the response to the disaster can be critical to saving lives. And getting people, infrastructure, schools, businesses, and communities back on their feet as quickly as possible can be critical to economies.

Next time you bump into some rightie bragging about the great Reagan economy, shove this in his face.