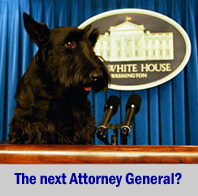 Republican Senator Arlen Spector predicted yesterday that Attorney General Alberto Gonzales would resign soon, possibly before the Senate has a chance to vote on a “no confidence” resolution.

I’m skeptical. If Gonzo or his boss really gave a bleep what the Senate thinks, he’d be gone already.

The White House said it was unclear whether there would be such a vote and criticized those Democrats pushing for it, singling out New York Democratic Sen. Charles Schumer in particular.

“As for no-confidence votes, maybe senators need a refresher course on American civics,” said White House spokesman Tony Fratto, with President George W. Bush in Crawford, Texas. “What I mean is I think you find no-confidence votes in parliamentary systems, not the American system of government.”…

… Bush has solidly backed Gonzales so Democrats in the Senate — who have tried to broaden their complaints against the attorney general — scheduled a rare “no-confidence” vote in hopes of pressuring him to leave.

The White House brushed off the vote, which has no binding impact on Bush.

“I think the attorney general is not affected by it. I think the media seems to be focused on it, which I think for some of the members who are instigating these kinds of questions, like Senator Schumer, (this) is exactly what they want,” Fratto said.

Senator Spector thinks the A.G. will resign to avoid some sort of “black mark.” A little late for that, I believe. And Gonzo’s performance has been so shamefully bad that if he had even a primitive conscience he’d be hiding under his bed right now, possibly contemplating ritual suicide. Clearly, he’s immune to remorse.

Gonzo has Bush’s “confidence,” meaning that it serves Bush’s purposes to keep Gonzo at the DoJ. It’s unlikely the President would be able to find another such utterly servile factotum outside of a kennel.

But wait … Bush does like to fill important positions from within his inner circle. Who’s left beside Barney?

3 thoughts on “DoJ Going to the Dogs?”