I’ve said before that people who praise “moral clarity” generally are neither clear nor moral. “Moral clarity” advocates are not into wrestling with the painful choices presented by complex moral issues; they just want a team to root for.

Ladies and gentlemen, I give you Stu Bykofsky, moral clarifier extraordinaire (hat tip to Will Bunch). Bykofsky thinks that what America needs is another 9/11.

Yes, you read that right. We need another 9/11 so that we can, once again, be united against the evil Other and stop bickering over minor destractions like the rape of the Constitution and the violation of every ideal Americans ever held dear. Bykofsky writes,

Because the war has been a botch so far, Democrats and Republicans are attacking one another, when they aren’t attacking themselves. The dialog of discord echoes across America.

Remember the community of outrage and national resolve? America had not been so united since the first Day of Infamy – 12/7/41.

We knew who the enemy was then.

We knew who the enemy was shortly after 9/11.

Did we? Two years after 9/11, polls showed that nearly 70 percent of Americans believed Saddam Hussein was behind the 9/11 attaciks. Today, even after repeated debunking of that claim and an admission by George Bush that there was no Iraq-al Qaeda link, more than 40 percent of Americans still believe Saddam Hussein was, somehow, involved. Last month Newsweek reported:

Even today, more than four years into the war in Iraq, as many as four in 10 Americans (41 percent) still believe Saddam Husseinâ€™s regime was directly involved in financing, planning or carrying out the terrorist attacks on 9/11, even though no evidence has surfaced to support a connection. A majority of Americans were similarly unable to pick Saudi Arabia in a multiple-choice question about the country where most of the 9/11 hijackers were born. Just 43 percent got it rightâ€”and a full 20 percent thought most came from Iraq.

Because we have mislaid 9/11, we have endless sideshow squabbles about whether the surge is working, if we are “safer” now, whether the FBI should listen in on foreign phone calls, whether cops should detain odd-acting “flying imams,” whether those plotting alleged attacks on Fort Dix or Kennedy airport are serious threats or amateur bumblers. We bicker over the trees while the forest is ablaze.

Yes, these are sideshow distractions. The real issue is … what, exactly?

… we have forgotten who the enemy is.

It is not Bush and it is not Hillary and it is not Daily Kos or Bill O’Reilly or Giuliani or Barack. It is global terrorists who use Islam to justify their hideous sins, including blowing up women and children.

Yes, we don’t do things like blowing up women and children to justify hideous sins, huh? 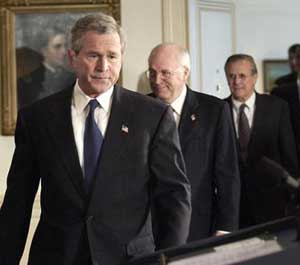 What would sew us back together?

Is there any doubt they are planning to hit us again?

If it is to be, then let it be. It will take another attack on the homeland to quell the chattering of chipmunks and to restore America’s righteous rage and singular purpose to prevail.

This is brilliant. We must unite against those who perpetrate mass destruction, and to do that we need more mass destruction. Bring it on. Just not New York City this time, OK? We’ve still got a hole in the ground from the last attack.

I remember after the 1991 Gulf War there was a flurry of news articles about post-war emotional letdown. Americans had rallied and cheered and tied yellow ribbons all over the bleeping landscape, yet after just a few days of cool shoot-’em-up television it was all over, and people had to take the ribbons down and go back to their humdrum, ordinary lives. I swear that I remember television interviews with people — not soldiers, mind you, just citizens who’d been watching the fun on television — who were tearful the party was over so soon.

Let’s face it: “national unity” is a high.

I think for New Yorkers the high was less pleasurable, because the grief was too deep. But even here, it was hard to let go. John Homans got to the heart of it in an absolutely brilliant essay in the August 21, 2006 issue of New York magazine:

In the city in the early weeks, a debate raged between those who resisted the emotional power of the event and those who gave in to it. People whoâ€™d seen World War II and Europeans, even rather hawkish and sympathetic ones, tended to wonder, after a while, whether it was time to get back to regular life again. One hated them at the timeâ€”their stiff upper lips were a luxury, and a vanityâ€”but now, that argument is more interesting.

I like what Homans says above about the emotional temptation of September 11.

The memory of 9/11 continues to stoke a weepy sense of American victimhood, and victimhood, as used by both left and right, is a powerful political force. As the dog whisperer can tell you, strength and woundedness together are a dangerous combination. Now, 9/11 has allowed American victim politics to be writ larger than ever, across the globe. When someone from Tulsa, for example, says, â€œItâ€™s important to remember 9/11 every day,â€ what he means is, â€œWe were attacked, we are the aggrieved victims, we are justified.â€ But if we were victims then, we are less so now. This distorted sense of American weakness is weirdly mirrored in the woundedness and shame that motivate our adversaries.

Woundedness. Victimhood. Justification. Anger. Fear. Temptation. This is where Great Evil is born.

In our current tragicomedy of Daddy-knows-best, itâ€™s a national neurosis, a perpetual childhood. (With its 9/11 truth-conspiracy theories, the far left has its own infantile daddy complex, except in that version, the daddies are the source of all evil.) No doubt, there are real enemies, Islamist and otherwise, more than ever (although the cureâ€”the Iraq warâ€”has inarguably made the disease worse). But the spectacular scope of 9/11, its psychic power, continues to distort Americaâ€™s relationships. It will take years for the country to again understand its place in the world.

That’s why it’s such a temptation to stay in that place of false clarity, where the dull fabric of ordinary life has been ripped apart, and all become intoxicated on “righteous rage and singular purpose to prevail.” That was so much more satisfying than these “endless sideshow squabbles” about how to extract ourselves from Bush’s disastrous foreign policy or how to restore the constitutional balance of power. And what a drag it must seem to climb down from the dizzying heights of righteousness to consider whether we are, in fact, “safer.”

Yet those are the tasks in front of us — injecting sanity into our foreign policy, restoring the Constitution, establishing stronger national security. We all want parties to last forever, but they never do, and when they’re over there’s a mess to be cleaned up.

In fact, it was our national intoxication on the emotional high of September 11 that got us into most of the messes we face now.

A year ago Steven Biel wrote for the Boston Globe:

The rhetoric about squandered national unity invokes a fleeting moment of bipartisanship and 90 percent presidential approval ratings. This apolitical golden age was supposed to be part of 9/11’s silver lining, along with the “end of irony” and the more enduring images and stories of heroism at the World Trade Center and on Flight 93. But less unity of this kind might have spared us some of the rancor and recriminations that make us seem so divided now.

Stu Bykofsky wants the party to resume. I say it’s way past time to sober up.