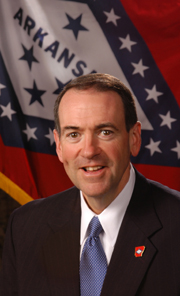 Arkansas Gov. Mike Huckabee’s second-place showing in the Iowa straw poll was unexpected, which means it will be spun as a win for Huckabee. Whether the straw poll means anything at all is debatable. Three candidates — Giuliani, Thompson, and McCain — did not participate. As I understand it the straw poll is as much a fund-raiser and pep rally as anything else, and candidates may hand out the $35 tickets for free and bus in supporters. This tends to tilt the playing field in favor of candidates with money and good organizations. Both Mitt Romney — who won — and Sam Brownback dropped a lot of money on a lot of attendees. Apparently Romney and Brownback handed out more tickets than they got votes, however, meaning that some of the people accepting their free tickets voted for someone else.

Mike Huckabee has about as perfect a record on social conservatism as is humanly possible. Plus, he is a Southern Baptist, which gives him a built-in edge with evangelicals over the Mormon Romney and the Catholic Brownback. If the straw poll performance gives Huckabee some fundraising momentum, it could move him into the first tier of Republican candidates.

Plus, as Noam Scheiber wrote at The New Republic:

The political press is absolutely head over heels for Huckabee. (There were high-fives all around when it became clear he’d finish second.) He’s a genuinely endearing guy who can banter with the best of them–watching him with reporters brings to mind the old black and white footage of Babe Ruth jawboning with sportswriters. When you add that to the political media’s general affinity for underdogs, you can see how Huckabee’s about to enjoy some serious media afterglow, which will only further boost his profile. With Romney suddenly vulnerable among conservatives and McCain and Giuliani both languishing here–last Sunday’s Washington Post poll had McCain at 8 percent and Giuliani at 14, compared with Romney’s 26–you may well have just met your 2008 Iowa caucus winner.

I would really like it if Noam Scheiber would name names. Which reporters were exchanging high-fives over Mike Huckabee’s success? Who are these people and what the hell is wrong with them?

Huckabee may be a nice fella, but he is waaaaaay right wing. On any social issue you can name — abortion, embryonic stem cell research, gay marriage, gay adoption, gun control — he is as firmly right wing as a person can be without falling off the planet. Would the press soft-pedal his extremism just because they think he’s a nice fella? You bet they would. Plus, he’s a governor, which the CW says is better than being a senator — or former mayor of New York City — if you want a presidential nomination. This means that if he begins to get some media attention, he could be a real contender for the Republican nomination.

Somehow, I’m not worried. Notice, for example, that 23,000 Iowans voted in the 1999 straw poll, compared to 14,302 this year. Can we say “disinterested”? Maybe more Iowa Republicans would have turned out had Thompson for Giuliani been campaigning, but loyal Thompson or Giuliani supporters could still vote for their guy; Thompson came in seventh and Giuliani came in eighth.

And Ron Paul was fifth, after Tancredo, which probably has Paul supporters planning their trips to Washington for the inauguration.

In 2000, when conservatism was riding as high as it ever was, Bush ran as something of a “stealth” conservative. A compassionate conservative. A conservative who wouldn’t rip benefit checks away from widows and orphans and who really wasn’t against abortion (wink wink) as much as he said he was. Remember that? So if the GOP couldn’t run a pure wingnut then, what makes them think they can get away with it in 2008?

Ron Brownstein has an interesting op ed in the Los Angeles Times about the demise of moderate Republicans.

Shays and Graham embody the two forms of dissent from the dominant conservative orthodoxy in the modern Republican Party. In one category are traditional moderates like Shays, who pursue a centrist course, especially on social and foreign policy issues, but whose numbers have relentlessly declined for decades. In the second are maverick figures like Graham or Nebraska Sen. Chuck Hagel, who are too conservative to be considered moderates but too eclectic and unpredictable to be considered reliable allies by the right. Both of these groups — moderates and mavericks — are under siege at a moment when Republicans are struggling to reach independent and swing voters disillusioned by Bush and the war.

In the coming election, moderate and maverick Republicans face mirror-image risks. Because the maverick conservatives tend to represent more solidly Republican areas (like Graham in South Carolina or Hagel in Nebraska), they face relatively less danger of losing to Democrats in a general election next fall. But precisely because they represent conservative regions where demands for ideological purity are more intense, the mavericks are confronting an elevated risk of challenges in party primaries. …

… The question for Republicans, as they try to dig out from the collapse of Bush’s second term, is whether they can rebuild a majority coalition without tolerating more dissent and diversity as well.

I doubt that they can. The Republican Party has been feasting on ideological red meat for so long I can’t see them taking a sudden interest in a balanced diet. It’s going to take an even bigger humiliation than last year’s midterms for them to be willing to repackage themselves.

3 thoughts on “A Hit for Huckabee”