If the Democrats were smart, they’d keep this conversation going, because the Frosts seem to be exactly whom we should be talking about. They’re trying to make it as a middle class family, without a lot of income. And they’re just about succeeding, as long Malkin and her friends don’t insist that they be bankrupted or stripped of their hard-won assets by their medical bills.

Medical bills are the number one cause of bankruptcy in this nation. When people are telling you how much better our system is than those of Germany, France, Australia, Canada, be sure to point that out. In our system, you could lose your job tomorrow, lose your health insurance in the same gulp and immediately become one bad illness or accident away from bankruptcy (although, in fact, our system regularly bankrupts even the people who think they do have coverage, as the Harvard Study illustrates).

And look at this! Malkin and her friends don’t want to fix that problem. On the contrary, they insist on it! They insist on the risk of bankruptcy as kind of a moral imperative; and they say members of the shaky, eroding American middle class who are not willing to put up with the ruination of their financial health from medical bills are leeches and wussies! Wow.

Yesterday I linked to some right-wing twit who equated having a child deliver an address on health insurance to terrorism. Today the same twit said I was

Unable to address the fact that the Democrats used terrorist tactics, people want to cry out about the nasty right wingers attacking a child, completely ignoring that it isnâ€™t the child that was attacked, it was the fact that by spotlighting the child, which people need to remember, the Democratic politicians put him in the front and center, not the Republicans, they high lighted the exact argument we had originally brought up about the bill itself.

In other words, it’s the Dems fault that the Frost family is being ripped to shreds by the Right? This is like saying “it’s your fault if you lead your cow into a river full of piranha.” Yes, righties are behaving like a school of piranha, and the Dems should have known this would happen. Well, as long as we all agree that righties are brainless, vicious flesh-eating animals, OK.

[Malkin] makes two points here, one about the bill that does not address states that do not count â€œassetsâ€ or â€œmeans testâ€ for enrollment eligibility into the SCHIP programâ€¦ so a person could own all the assets the can accrue and still have US, the American people, pay their health insurance?

How ridiculous is that and why is the language of the bill not addressing this issue?

There’s a reason that language isn’t in the bill, which is that even some Republicans know when not to jump the shark. As Colin McEnroe said, Malkin and her friends don’t want to fix that problem. On the contrary, they insist on it! They insist on the risk of bankruptcy as kind of a moral imperative; and they say members of the shaky, eroding American middle class who are not willing to put up with the ruination of their financial health from medical bills are leeches and wussies! Wow.

Democrats should be picking up on this latest “let’s strip their assets” demand and beat right-wingers over the head with it at every opportunity. As someone else said today, this could be another Terri Schiavo moment for conservatives.

Her second point is just as important, just as a terrorist will hide behind an innocent man, woman or child and shoot or launch rockets knowing that the innocents would get caught in the line of fire when one fired back at them, the Democrats held this child in front of them, hid like cowards behind him, knowing that when the family got caught in the line of fire, they could use that to distract from the issue of a badly written bill.

It wasn’t the Dems who came up with the distraction of fabricating a pack of lies, plant them on Free Republic through a GOP operative, and whip the rightie blogosphere into a lynch mob so as not to have to debate the real issues surrounding health care. This time, however, the goon tactics are about to implode in their faces. Because its families like the Frosts that we need to be talking about. It’s people like this, barely hanging on to middle class status, whose opportunities are being closed off right and left by the hemorrhaging mess we call a “health care system.”

People can try to distract from this all they want, but the Democratic politicians placed that child in the spotlight. Not the Republicans, not the conservative bloggersâ€¦. the Democrats did it, deliberately and with full knowledge.

Of course, Republicans never use children to promote their policies. 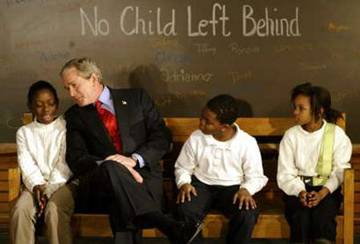 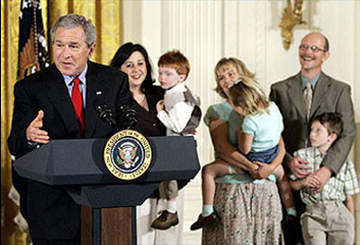 That second photograph is President Bush with the “snowflake children” families on the occasion of his veto of stem cell research appropriations. And, you know, we lefties could have looked up those families and staked out their houses and interviewed their neighbors and dug through their trash, and we could have found all manner of dirt we could have blown up into scandals to make the lot of them look ridiculous, especially if we distorted the truth as much as the Right has about the Frosts. But we did not do that, because we are not piranha.

See also: “Adults as Red Herrings” — why the right-wing talking point about adults receiving benefits through S-CHIP is bunk.