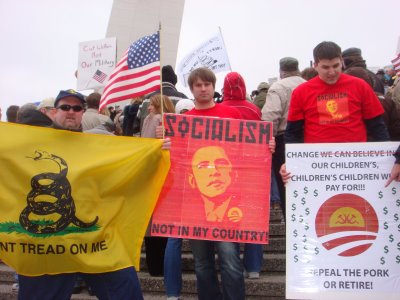 I watched part of this rant on Rachel Maddow’s show last night. It would have been so perfect if the crowd had burned a flag and then all their Social Security and Medicare cards.

Oh, and for the record, Sam Houston opposed secession.

Gregory Rodriguez writes in the Los Angeles Times about a new book by Sam Tanenhaus. In it, he discusses William F. Buckley’s response to the end of Lyndon Johnson’s political career:

The columnist in 1968 was, of course, William F. Buckley Jr., and on President Lyndon B. Johnson’s abrupt withdrawal from the presidential race, he was nothing if not circumspect. Why? Because as a classic conservative, Buckley understood the importance of stability and found the “burn, baby, burn” drumbeat from the left, which had forced Johnson’s decision, deeply unsettling.

In his column that week, Buckley opined that “instant guidance by the people of the government means instability, and instability is subversive of freedom.” In other words, Johnson’s withdrawal was too responsive. For Buckley, maintaining social order was of paramount importance, even if it meant helping to preserve the welfare state he deplored.

“Movement conservatism” began in part as a reaction to what the classic conservatives saw as anarchy from the Left. The DFHs of he 1960s were angry, and they burned flags and smarted off to cops. At the time, conservatives and the “Silent Majority” (who weren’t all that silent, truth be told) were more upset about the loss of social order and supposed lack of patriotism the “hippies” represented than they were about the DFH’s call to end the war in Vietnam. The war was never wildly popular.

So 40 years later the backlash to anarchy has come full circle and is becoming anarchy, and the extreme fringes of it are admitting to America-hating. I think if (dare we hope?) a reasonably good health care bill with the public option intact is passed, we’re going to see at least a couple of years of spreading secessionist fervor among the tea-partiers.

Just listen to the ruckus over healthcare. Are there problems with the Democrats’ proposals? Absolutely. But the tenor of criticism from so many on the right suggests they’re more interested in destruction than resolution. As Tanenhaus puts it, the contemporary right defines itself “less by what it yearns to conserve than by what it longs to destroy.” They call themselves conservatives, but the “I hope Obama fails” rhetoric of Rush Limbaugh is more reminiscent of the tantrum-throwing far left of the late 1960s than of classic conservatism.

The analogy between the DFHs of the 1960s and today’s anarchist mobs is not perfect, for reasons Rodriguez explains here;

Hofstadter points to the fundamental rootlessness and heterogeneity of U.S. society, and the “peculiar scramble for status and [the] peculiar search for secure identity” that those qualities inspire. Without, say, a traditional class system — a “recognizable system of status,” in Hofstadter’s words — Americans suffer from “status anxiety.” During times of great social flux, these fears play out in politics as people seek out enemies (which helps them reaffirm their own standing) and, at the same time, damn a social order they feel they can’t dominate.

The DFHs of the 1960s were not a monolithic group. The genuine freaks — “Turn On, Tune In, and Drop Out” — generally (there were exceptions) were not the same people who took over Dean’s offices in universities. Although there were some vocal anti-capitalists, the majority of people who showed up at protests weren’t planning to overturn the capitalist status quo (which was pretty sweet at the time, at least for middle-class whites). Although many sympathized with Abbie Hoffman, for most the counterculture was a last hoorah before they put on their gray flannel suits and melded into corporate America. The bulk of the angry Left of the 1960s were not suffering from status anxiety, I don’t believe.

No; status anxiety expresses itself in a brainless, right-wing reactionism. That’s what we’re seeing now. I fully agree that the people who show up to scream about socialized medicine are acting out inchoate anxieties that have nothing to do with any particular policy. They care more about having an enemy to hate and blame than they care about the facts of the health care issue.

Another difference between 1960s hippies is that, conservative fantasies to the contrary, the antiwar movement really wasn’t being orchestrated by the International Communist Conspiracy. The most radical of its leaders were more like free-floating pot-stirrers than anybody’s fellow-traveler. However, the rage and energy on the Right today is definitely being stoked and manipulated by special interest elites.

This gets us into the topic of yesterday’s Krugman column, titled “Missing Richard Nixon.” Krugman makes some of the same points as Rodriguez:

No, I havenâ€™t lost my mind. Nixon was surely the worst person other than Dick Cheney ever to control the executive branch.

But the Nixon era was a time in which leading figures in both parties were capable of speaking rationally about policy, and in which policy decisions werenâ€™t as warped by corporate cash as they are now. America is a better country in many ways than it was 35 years ago, but our political systemâ€™s ability to deal with real problems has been degraded to such an extent that I sometimes wonder whether the country is still governable.

I had to think about the “America is a better country today” line, but we have come a long way in regard to racial and gender discrimination. And we could debate whether Nixon was worse than the recently retired Bush.

We tend to think of the way things are now, with a huge army of lobbyists permanently camped in the corridors of power, with corporations prepared to unleash misleading ads and organize fake grass-roots protests against any legislation that threatens their bottom line, as the way it always was. But our corporate-cash-dominated system is a relatively recent creation, dating mainly from the late 1970s.

And now that this system exists, reform of any kind has become extremely difficult. Thatâ€™s especially true for health care, where growing spending has made the vested interests far more powerful than they were in Nixonâ€™s day. The health insurance industry, in particular, saw its premiums go from 1.5 percent of G.D.P. in 1970 to 5.5 percent in 2007, so that a once minor player has become a political behemoth, one that is currently spending $1.4 million a day lobbying Congress.

Basically, capitalism is eating itself, and the peasants are revolting. I’m thinking maybe I should keep a bag packed for my escape to Canada so I can get in before they close the borders.

Update: Nice article at The Nation by Patricia Williams, “Reverse Nazism and the War on Universal Healthcare.”

If you are watching the healthcare town-hall ruckuses with only common dictionary meanings in your head, you will be struck by the protesters’ general incoherence and outright nonsense, bearing no rational connection to the actual draft of the healthcare bill. As Representative Barney Frank demanded of one constituent who likened the bill to Nazism, “On what planet do you spend most of your time?”

But if you listen as though deciphering pig Latin and realize that this demographic is speaking from a well-managed, near-hypnotic looking-glass world where every word from the mouth of a Democrat (or a liberal, or a Latina, or a Canadian) is a lie, a betrayal… then it all makes sense. Their world truly has been turned inside out, by the election, by the economy, by the precarious conditions that threaten us all. But for those whose sense of identity has been premised on a raced, masculinist, conservative Christian hierarchy of American power, the world must seem even more emotionally terrifying than any actual facts would indicate.

So reversal is key to understanding what’s going on. It’s not just “lies”; it’s the expressive angst of people whose felt power relations have been turned upside down. It’s not factually accurate, but this is how they feel. Obama is Hitler! Health insurance for all means euthanasia for me! “My” country is suddenly “their” country.

However, if special interest elites had not fed these fears, encouraged the hysteria, and even taught people what to say, I think most of these people would be uneasy but not raging bat-bleeping crazy.

17 thoughts on “Meet the New DFHs”