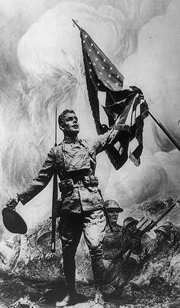 Today Wingnuts are suffering from reaction whiplash. Early in the week they were slamming President Obama for not personally attending the observance of the fall of the Berlin Wall on Monday.

They shut up after some of them realized it would have been a challenge for him to be in Berlin on Monday and Fort Hood, Texas, on Tuesday. Of course, nothing he did at Fort Hood placated them either. A speech being called “great” by some parts of media was dismissed as “largely unemotional” by the Wall Street Journal.

Blogger wingnuts dismiss the speech because it was Barack Obama who delivered it, and everyone knows Barack Obama hates the military and America because he’s, you know, Barack Obama.

One said, “Some say that Obama looks down on the military. He views our soldiers as the great unwashed, trashy and ignorant, like Sarah Palin.” Yes, no doubt some say that. And some say all wingnut bloggers put together couldn’t outsmart a cactus.

Others assert that Obama’s sympathies lie with the Muslims. Thus, he wants to avoid our burning questions: Why wasn’t Major Hasan put on leave after he made anti-American remarks and surfed the web for information about Jihad? Most importantly: what is the government going to do to keep our military people and civilians safe?

Today James Gordon Meek reports for the Daily Post that the President is turning up the heat on the military and the FBI for not acting on some obvious red flags in Army Maj. Nidal Malik Hasan’s record.

However, I doubt the President was ever handed a memo before the shootings warning that Army Maj. Nidal Malik Hasan was planning to commit mass murder somewhere. If he had been given such a memo and ignored it, then he would have been a really bad President, huh?