Media Matters says MSNBC actually hosted Pam Geller to explain why a mosque should not be built near the Ground Zero site. To me, this is a bit like bringing on Tom Delay to discuss ethics in government. Although, come to think of it, I believe that’s been done, too.

I understand the mosque is to be built at 45 Park Place, which is a couple of blocks away from the Ground Zero site. Just for fun, I pinpointed that location on Google Maps to show its physical proximity to Ground Zero: 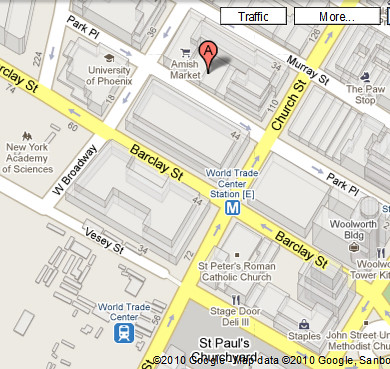 GELLER: We know in Islamic history that they build triumphal mosques on the cherished sites of sacred lands of conquered lands. So how is building a mosque, looking down at the cemetery of ground zero where they’re still finding remains outreach?

Unless they’re planning to build a 110-story mosque, it won’t be “looking down” on Ground Zero. However, it appears it might be looking down on the Amish Market. Somebody should alert the Amish.

Apparently there was some kind of hearing on the building of the mosque recently, and from the video it’s obvious hardly anyone showed up for it. I’ve seen some headlines that suggest there is some groundswell of opposition to building the mosque in Manhattan, but I don’t think most Manhattanites are that worked up about it.

To their credit, NBC and CBS have refused to air a hateful Muslilm-bashing ad in opposition to the mosque. But that doesn’t make up for MSNBC actually giving a platform to Crazy Toxic Hate Geller.

Righties are trying to tie anyone associated with the mosque to jihad, but of course to righties everyone remotely associated with Islam is a jihadist. The mosque is a project of the Cordoba Initiative, which appears to be an organization of moderate and peaceful Muslims who oppose sectarian violence. (So if we can’t be tolerant to Muslims who want peace and harmony, which Muslims can we be tolerant to? Why, none, of course. That’s the point, to hate all Muslims because they are Muslims.)

And then there’s the Florida birther-preacher named Bill Keller who wants to build a “9/11 Christian Center” as an alternative (?) to the mosque. As if there aren’t a number of large churches already there, including the famous St. Paul’s Chapel. St. Paul’s, where George Washington went to pray after his first inauguration as President, really is adjacent to the Ground Zero site but, remarkably, sustained only minor damage that day. For weeks after it was used as a “rest” station for Ground Zero workers. Parishioners kept the church open 24/7 and provided food, first aid, and places to rest for the workers.

There’s your “9/11 Christian Center.” What Bill Keller wants to do isn’t “Christian,” it’s just territorial marking. He wants to come here and pee on our trees, so to speak. Keller, stay home.

17 thoughts on “Peeing on the Trees”