The Republican Governor’s Association has launched a website called “Stand With Scott.” That’s Scott as in Scott Walker; I guess it’s illogical to say “Stand With Walker.” Anyway, as it says at The Note, the site features “pledges of support from GOP Governors Rick Perry of Texas, Bobby Jindal of Louisiana, Haley Barbour of Mississippi and Bob McDonnell of Virginia.”

You hear that, Wisconsin? Southern states want you to be just like them! The GOP wants to turn Wisconsin into North Mississippi!

However, Republicans governors of states that were not once part of the Confederacy appear to be backing away from Walker and his union-busting scheme. Gov. Mitch Daniels of Indiana, Gov. Tom Corbett of Pennsylvania, and even Gov. Rick Scott of Florida — southern, but never Confederate — are making noises about “right to work” laws not being a big priority right now.

Even Chris Christie of New Jersey, about as anti-teacher’s unions as they come, said this morning that public employees should still be able to collectively bargain. If Christie isn’t going to try to bust teachers’ unions, seems to me that’s a pretty good indicator that the momentum is with the unions.

However, New Jersey and Pennsylvania are not Ohio and Indiana. And according to WaPo‘s right-wing blogger Jennifer Rubin, by distancing himself from union busting, Mitch Daniels has killed any chance of being the GOP presidential nominee in 2012.

In short, Daniels caved, perhaps the surest sign yet that he’s not running for president or doesn’t understand what conservatives expect of a presidential candidate. . . . As one very smart Republican insider put it, “I guess Mitch really isn’t running.” Two other Republican operatives weighed in that they, too, thought this was the end of Daniels’ presidential ambitions. I wonder how all those who fawned over his CPAC speech feel now that he’s essentially conceded his position to the unions. Moreover, this represents a personal flip-flop of Mitt Romneyian dimensions, given Daniels’s previous statements and stance on the fiscal harm caused by public-employee unions. . . Meanwhile, Walker rose to the occasion and improved his standing among conservatives.

I absolutely agree that the Republicans should nominate a guy with a clear record of union busting. I’d love to see Michelle Obama in another stunning inauguration gown.

In the past couple of days a number of polls have come out (the most recent from the Associated Press) indicating that most of the public gets it. Yes, they want to see public employees make some sacrifices, but they are opposed to busting the unions.

Meanwhile — although Mitch Daniels has backed off, Republicans in the Indiana legislature are still pushing a bill that would bust private sector unions. Dem Indiana legislators are mostly remaining out of state, although it’s not clear that would prevent anti-union legislation from being passed. One Dem legislator told a reporter that he hoped the delaying tactic would give the people of Indiana time to learn what the Republicans are trying to pull.

And union members are rallying in Columbus, Ohio, in opposition to a bill that would strip collective bargaining rights from state employees. For a time yesterday, protesters were locked out of the statehouse. The doors were opened again when Dems threatened to get a court order.

Other related items, filed under “get a brain, morans” —

Someone in Madison evoked the famous saying of the Rev. Martin NiemÃ¶ller:

First they came for the Socialists, and I did not speak out —
Because I was not a Socialist.

Then they came for the Jews, and I did not speak out —
Because I was not a Jew.

Then they came for me — and there was no one left to speak for me. 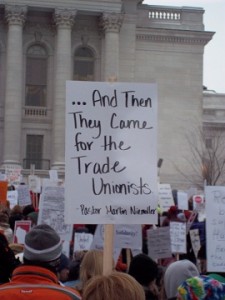 Some versions of this quote put the sentences in a different order, with “Jews” coming before “Trade Unionists.”

The terminally dense John Tabin of The American Spectator chose this sign as the “craziest” in the crowd, adding, “I’m fairly sure that Governor doesn’t plan on building death camps, but if I find any evidence to the contrary I’ll be sure to report on it.” I doubt he’s building death camps, either, but the point that the Right collectively is pulling America into fascism is well taken. Fascism can’t tolerate unions.

The Right’s demonization of Muslims, IMO, bears an uncanny resemblance to the way a certain German political party of the 1930s demonized Jews. But if one must have demonization of Jews to see evidence of fascism, just the other day Glenn Beck dumped Reformed Judaism into the same category as “radical Islam.”

If the shoe fits, dude …