I wasn’t going to write anything about the decision to not take the Martin-Zimmerman case to a grand jury, because it doesn’t mean anything. But yesterday I kept running into people on the Web who were wailing that it meant the prosecutor will let Zimmerman walk. No, it just means she’s not going to seek a death penalty.

But then this morning I read this, by Tim F. at Balloon Juice:

It seems likely that George Zimmerman will walk for shooting an unarmed teenager. The special prosecutor has more or less thrown up her hands and I can hardly blame her, caught between that stupid law and the absolute hash that Sanford PD made of their initial response. That, at least, might go punished. I have some hope that the Federal investigation into their department will at least shame the Sanford PD into doing a better job next time

I would have just left a comment at Balloon Juice, but I seem to be on the twit filter there as none of my comments ever show up on the threads. So here goes — grand juries are only required in Florida in capital murder cases. The prosecutor doesn’t need a grand jury to charge Zimmerman with second-degree murder or voluntary manslaughter. Further, I’ve read this particular prosecutor, Angela Corey, has a history of not bothering with grand juries when the law does not require them. Her decision to not use a grand jury doesn’t tell us anything about where she might be headed, one way or another.

But a grand jury outcome would have been unpredictable, and it’s also my understanding that Trayvon Martin’s family had preferred the case not go to a grand jury.

My understanding is that the original prosecutor — the one who was trying to sweep it all under the rug — scheduled a grand jury after the public outcry began. No doubt he thought dumping the case on a grand jury would take the heat off him. No doubt it didn’t work.

In other Zimmerman news, it appears the Zimmerman family has put up a website soliciting donations for Zimmerman’s defense and featuring a photograph of the vandalized black cultural center at Ohio State University (click to enlarge): 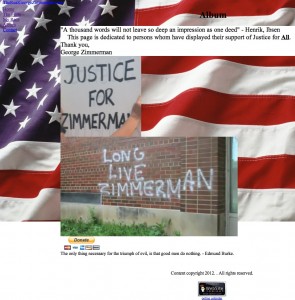 Charles Johnson asks, “Could Zimmerman really be this dumb?” That would be my guess, yes.

Speaking of dumb, alleged pastor Terry “Islam Is of the Devil” Jones, who likes to draw attention to himself by pulling stupid Koran-burning stunts to get U.S. troops killed, led a rally in support of Zimmerman. (“Wherefore by their fruits ye shall know them.” — Matthew 7:20, King James Bible)

9 thoughts on “The Grand Jury Decision: Something That Means Nothing”