Maybe I’m not remembering the past correctly, but it seems to me that if the refugee children crisis had happened decades ago, Americans would have just helped them. State and local governments would have cooperated in some kind of humanitarian effort; church and other groups would be sending toys and blankets and offering to foster the younger ones, at least while their status was sorted out.

Now it’s like we’re a nation of grumpy old men yelling at everyone to get off our lawn. I’ve even heard politicians complain we have to turn them away because they might be carrying diseases.

What the children are fleeing is anarchy. they are fleeing failed states in which there is no functional criminal justice system and criminal activity, including murder, is carried out with impunity. People arm themselves and join gangs just to survive. In short, it’s the sort of place the “open carriers” and Bundy Ranch militia crowd are trying to turn the U.S. into.

The President has asked for $3.7 billion to deal with the crisis and is also asking state governors to get behind hosting the children. I take it the request is running into a wall of NIMBY. Under current law and with current resources, it could take years to determine the status of and make decisions about many of these children. A couple of Texas politicians propose to amend the law to make it easier to ship the children back to the kill zones.

Fox News has learned that 748 unaccompanied minors have been transferred from areas near the border to the Chicago area. Of the original group of 748 kids, 319 have been placed with family members or sponsors while they await an immigration hearing. The other 429 have been placed in facilities run by the Heartland Alliance, a nonprofit organization that receives grants from the Department of Health and Human Services

Oh, the, um, humanity? We’re supposed to keep tens of thousands of children locked up in holding cells in Texas?

Sen. Mark Kirk, R-Ill., told Fox News Friday that he did not know the exact locations of the facilities where the children were being kept, and stated his belief that the White House did not want the children’s living conditions to be made public.

More likely the White House doesn’t want a bunch of Fox News-watching goons to try to seize the children and dump them back over the Rio Grande.

Speaking of which, Fox News also is reporting that bodies of dead children have been found in the Rio Grande; they apparently died trying to cross. The geniuses who write right-wing blogs are blaming President Obama because of “his” immigration policy (a law passed in 2003 and amended in 2008).

For President Bush, Katrina became a toxic political subject due to dead bodies floating in the waters to underscore the human crisis. But at least he responded. 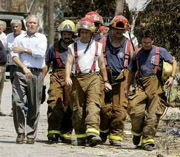 That’s a joke, right? Dubya got his picture taken with firefighters. End of response. See also New Orleans: What a Difference a Year Didn’t Make and Stormy Weather.

For President Obama the question is, will the floating bodies of young â€œDreamersâ€ finally stop the President from playing politics and start playing leader of the free world?

What’s driving those children to the U.S. is going on in Honduras, Guatemala, and El Salvador, not Washington. And if anybody is “playing politics,” it’s Republicans in Congress and elsewhere who seem to want to make the refugee crisis as messy as possible to make the President look bad.

Unfortunately I don’t see a real solution that wouldn’t require some kind of action on the part of Honduras, Guatemala and El Salvador, which are even more dysfunctional than the U.S. House of Representatives. Our basic choices at the moment are either to give the children shelter or ship them back to a place where many more will die. If we choose the former, we need to spend some money and make an effort to treat these children humanely so they have a chance of growing up to be responsible and law-abiding people.

If it’s the latter, wingnuts stop the phony outrage about bodies in the Rio Grande. If we ship them home, we’re shipping some of them to their deaths; the only difference is that they’ll die out of reach of Fox News cameras.