But instead of talking about the crisis Christians in the Middle East are facing, Cruz made the speech about supporting Israel.

On first glance, this looked like an unforced error on Cruz’s part. He could have stood up and given an anti-ISIS, rah rah Christians speech, and they would have loved him. But I have come to believe he deliberately antagonized the group; he wanted to be booed. Read on to find out why.

First, the boos. The real kicker was when he said â€œChristians have no greater ally than Israel,â€ at which point a large part of the audience lost it.

Since then all manner of people have tried to understand why Cruz gave such an inappropriate speech. James Zogby:

It is generally known that Ted Cruz can be a demagogue, a quality that makes him immensely disliked by his colleagues. He is also considered to be quite bright and calculating. And so as I have attempted to understand why he did what he did, two distinct scenarios come to mind. It is possible that he went to the IDC conference to provoke a “Sister Souljah” moment — which he could then exploit with his supporters on the fundamentalist right as evidence of his political courage. It is more likely that he had no clue about the reaction his taunting remarks would receive and was, therefore, stunned by the audience reaction — and that it was only mid-stream that he decided that he could use the audience reaction to his political benefit.

In either case, Cruz displayed a shameful insensitivity to the concerns of Middle East Christians and a total lack of awareness of their history and current needs. Like too many of his colleagues, he can only see the Middle East through then lens of what is good for Israel. Because he comes out of the Christian fundamentalist world and now operates in the bubble of Washington politics, he simply had no understanding of his audience and no desire to listen to them and learn from them.

That’s what I thought, too, but I realize now I was wrong. At the American Conservative, Rod Dreher shed some light:

The politics of the Middle East are tangled and almost impossible to understand. Many Maronites despise the Palestinians, for example, blaming them for destroying Lebanon. Within Lebanon, there is no love lost between Maronites, who are Catholics, and the Orthodox. But many Maronites are fond, however grudgingly, of the Israelis, because they see them as the enemies of their enemies, the Palestinians. But not all Maronites feel that way. Itâ€™s complicated. Insanely complicated. And everybody suffers from the same conspiracy theorizing that is common currency in the Middle East.

You will appreciate, then, what a diplomatic feat it was to bring a group of top Christian leaders from the Middle East together in Washington for a summit to talk about the crisis of the persecution of Christians in the region. TheÂ Washington Free BeaconÂ shamefully characterized the event asÂ a pro-Hezbollah hootenanny, citing the anti-Israel politics of some conference participants as if that were the most important thing about this religious and human rights event. As if Israelis were the only people in the Middle East whose suffering matters.

Look at the Washington Free Beacon headline, which came out before Cruz gave his speech. Just look at it. 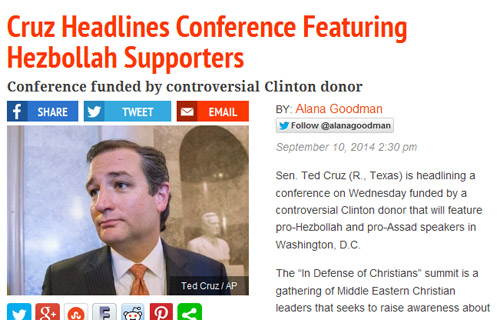 A light dawns. He had to get himself booed off the stage or risk becoming a pariah to the wingnut twits who are his base.Â It was deliberate.

In particular, the Free Beacon, Breitbart, and some other of the more irresponsible far-right propaganda tools named one of the conference attendees, Lebanese Maronite Patriarch Beshara Rai, as a Hozbollah supporter. But in June The Blaze reported,

A Hezbollah member of Lebanonâ€™s parliament is criticizing Lebanonâ€™s top Christian cleric after the religious leader visited Israel last week where he traveled with Pope Francis, prayed with local Christians and met with fighters from the now defunct South Lebanese Army (SLA) who fled to Israel more than a decade ago.

This isn’t my primary area of expertise, but after some digging I get the impression that the Lebanese Christians are in a very precarious position of trying to not get caught in cross-fire between Hezbollah and Israel, and of course Lebanon also shares a long border with Syria, so they’ve got a lot to worry about, and the Patriarch is not averse to talking to people who need placating, including Hezbollah. And in 2011 he issued a statement that said Hezbollah had a right to defend itself against Israel, which may have been an expedient thing to say if you’re a Lebanese Christian. But in the simple minds of the children who run the Free Beacon and Breitbart, this makes the Patriarch and some other conference attendees the enemy.

The Christian Broadcast Network covered the speech this way —

Well, Sen. Ted Cruz had an interesting night in Washington D.C. Wednesday and our Brody File camera crew was there to capture it all.

Middle Eastern Christians booed Cruz off the stage during his speech at a summit in Washington D.C. It was sponsored by a group called In Defense of Christians.

Cruz came to speak about Christian solidarity with Israel but some in the crowd were Palestinian Christian supporters of the Syrian government and even the terrorist group Hezbollah. Things got rowdy.

But the summit was not about Christian solidarity with Israel. At The American Conservative, Daniel Larison wrote,

Cruzâ€™s behavior was unnecessary, it was insulting to his hosts, it was needlessly provocative to the audience, and it was an embarrassment to his voters. Because he has proven time after time to be a shameless demagogue, none of that will bother him.

An important point that has been lost in many of the reactions to this incident is that Cruz was completely out of line to set some kind of ideological litmus test for the attendees that requires them to endorse the â€œpro-Israelâ€ views that Cruz happens to hold. Cruz is free to hold those views, and many of his voters agree with him, but it is obnoxious to demand that others, including many Arab Christian clergy in attendance, subscribe to those views in order to obtain Cruzâ€™s sympathy for their plight. Not only is â€œstanding with Israelâ€ irrelevant to the reason for the summit, but as this incident has proven it is a completely unnecessary distraction from the work of the organization that sponsored the event.

Even Ross Douthat gets it —

WHEN the long, grim history of Christianityâ€™s disappearance from the Middle East is written, Ted Cruzâ€™s performance last week at a conference organized to highlight the persecution of his co-religionists will merit at most a footnote. But sometimes a footnote can help illuminate a tragedyâ€™s unhappy whole. …

… Many conservatives think Cruz acquitted himself admirably, and heâ€™s earnedÂ admiringÂ headlinesÂ around the right-wing web. There is a certain airless logic to this pro-Cruz take â€” that because Assad and Hezbollah are murderers and enemies of Israel, anyone who deals with them deserves to be confronted, and if that confrontation meets with boos, youâ€™ve probably exposed anti-Semites who deserve to be attacked still more.

But this logic shows not a scintilla of sympathy for what itâ€™s actually like to be an embattled religious minority, against whom genocide isnâ€™t just being threatened but actually carried out.

And strictly speaking, Arabs are Semites, too, or at least the dictionary says so. But Cruz wasn’t just being stupid. He did what he had to do to help himself.