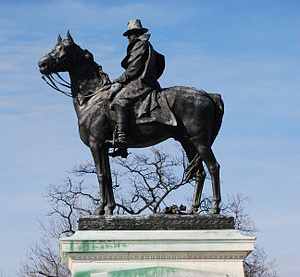 I am literally getting out of a sickbed to write this, as I have a stomach flu, but you know nothing rouses me like being pissed off.

So I’m huddled in bed reading political commentary and social media on my Kindle. And it’s pissing me off. I read one thing after another saying, oh, Walter Mondale lost in 1984 and Mike Dukakis lost in 1988 — most of ’em don’t go as far back as my first presidential candidate, George McGovern, who lost in 1972 — and because we lost then we must choose a very safe candidate and not anybody too radical because the Right is all-powerful and very mean and they will beat us to death, or something.

I remember the words of my favorite dead white guy, Ulysses S. Grant. During the Battle of the Wilderness, an officer came to him babbling anxiously about what Robert E. Lee would do to defeat them. And the General said,

None of the weenies seem to remember that we all settled on John Kerry in 2004 because he seemed to be the “safe” candidate. I don’t recall that he won. But that was then.

Nixon is dead and Reagan is dead and Lee Atwater is dead. Karl Rove is out howling in the wilderness raising money for a Super-PAC that can’t elect candidates. Fox News and the National Review threw everything it had at Donald Trump, to no avail. The Republican establishment has completely lost control of the process, and IMO none of the current GOP front-runners could be elected POTUS if you spotted them 50 electoral college votes. And I can’t wait to see the train wreck that will be the GOP National Convention.

Most of the hand-wringing is coming from people who assume Hillary Clinton is electable, but IMO that is an untested proposition. She’s doing best among a demographic that probably will turn out for the Republican — old rich people. She’s expected to win primaries in a bunch of solid-red southern states that she will not win in the general. So how is she electable?

As my friend Jeffrey Feldman wrote on his Facebook page,

I’m fascinated by this argument that it’s necessary to NOT vote for Sanders now because he cannot win in the general. There’s a broader logic at work, but in its most basic–it is saying: you must vote for the candidate who cannot win this primary election because that is the candidate who can win the general election. The loser must win for us to ultimately win. Totally bizarre to be on the receiving end of this attempt at persuasion.

So much for “safe” candidates.

The hand-wringers are telling us we have to modify our views and run the allegedly safe candidate, because the Evil and All-Powerful Right can be expected to turn a double somersault and land in our rear and on both of our flanks at the same time. Frankly, I don’t think they’ve got it in them this year.

Yes, down-ticket elections. Why are we thinking about electing someone who turns off nearly every demographic? Don’t you want a bunch of enthusiastic leftie voters to actually, you know, show up at the polls? Do you think leftie, progressive voters are going to get confused and vote for right-wing Republicans down ballot? Duh.

Let’s stop modifying our views and negotiating with ourselves and running scared because we’re afraid of what those other people are going to do. What are we going to do?

If you plan to vote for Hillary Clinton because you sincerely believe she is the best candidate for the job, and because you agree with her positions on issues, that’s fine. But stop claiming we all have to vote for Clinton whether we want to or not or the sky will fall. I’m not seeing it.

“Carry the battle to them. Don’t let them bring it to you. Put them on the defensive and don’t ever apologize for anything.”  — Harry S Truman

50 thoughts on “Let’s Stop Being Weenies”