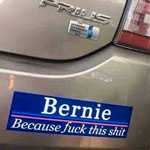 All of the presidential candidates but Bernie Sanders spoke at a convention of the American Israel Public Affairs Committee (AIPAC) yesterday. Sanders, the only Jew among the candidates, was in the western U.S. and offered to speak remotely, but AIPAC turned him down. So instead he gave his speech in Utah to another audience.

In brief, Clinton and Sanders are worlds apart on Israel. Sanders criticized Israel for its treatment of Palestinians. Clinton delivered a speech that could have been written by John Podhoretz. She brought down the house at AIPAC.

I have more to say on this. But let’s first look at the Republicans.

Although the AIPAC crowd remains leery of Donald Trump, he threw them off guard by delivering a prepared speech that promised to back most of AIPAC’s positions — condemning the Iran deal and placing all of the blame for the Israeli-Palestinian conflict on the Palestinians. He promised to recognize Jerusalem as the capital of Israel. He also drew big applause by calling President Obama “the worst thing to ever happen to Israel,” although an AIPAC spokesperson today officially distanced the organization from these remarks.

John Kasich spoke of his admiration of Israelis, his determination to scuttle the Iran deal, and his concern for the victimization of Jews. Ted Cruz did not, in fact, show up wearing a yarmulke and tallit, but given his full-court-press panderingÂ  he might as well have. He also evoked Munich, 1938, in regard to the Obama Administration’s Iran deal. Obama = Hitler. Whether AIPAC distanced themselves from that I haven’t heard.

Now, on to Clinton. On the plus, side, she hasn’t (yet) called for the extermination of all Palestinians. And she cannot completely disavow the Iran deal, seeing as how she was partly involved in it. But she promised to call it off if any Iranian so much as sets off firecrackers for New Years.

Here are some headlines about Clinton’s speech:

Juan Cole — Hillary Clinton goes full Neocon at AIPAC, Demonizes Iran, Palestinians. “Clinton has just announced a diction and a set of policies toward the Middle East that differ in no particular from those of far right Israeli prime minister Binyamin Netanyahu.”

True to her hawkishness, Clinton openly called for a strong U.S. empire. â€œWe need America to remain a respected global leader, committed to defending and advancing the international order,â€ she proclaimed.

Clinton even asserted that the U.S. should act unilaterally, even if it must fly in the face of the international community. â€œI would vigorously oppose any attempt by outside parties to impose a solution,â€ she said, â€œincluding by the U.N. Security Council.â€

The rhetoric of the former secretary of state â€” who, virtually single-handedly, helped push for the disastrous NATO war in Libya â€” was so hawkish, Clinton was compared to Netanyahu.

â€œI literally could be listening to Bibi Netanyahu right now at AIPAC,â€ noted Naomi Dann, media coordinator for the group Jewish Voice for Peace, and it â€œwouldnâ€™t sound any different than Hillary Clinton.â€

She spent significantly more time railing against the â€œalarmingâ€ Boycott, Divestment and Sanctions Movement, which is gaining traction on college campuses nationwide. Pledging to â€œtake our alliance to the next level,â€ Clinton said that one of the first things sheâ€™d do in office is invite the Israeli prime minister to the White House. That was a barely veiled rebuke to Obama, who never treated Benjamin Netanyahu with the deference the prime minister felt entitled to. Before the speech, some had hoped that Clinton might offer a word of solidarity or encouragement to beleaguered progressives in Israel. She gave them nothing.

Naturally, reactions to this speech from Clintonistas in social media range from silence to condemning Bernie Sanders for excessive Zionism.

The most bizarre critique of Clinton’s speech was from Max Fisher at Vox, who acknowledged it was a very hard-line speech, but who assured us we should not be concerned, because she doesn’t really mean it. The rhetoric is just a strategy for working with Israel, he says. She can be counted on to continue Obama’s policies, even though she more than hinted Obama’s policies aren’t good enough .

On to Sanders. Speaking to supporters in Utah, Bernie Sanders voiced support for a two-state solution. He supports Israel’s right to nationhood, but he also criticized Israel for their actions against Palestinians in Gaza.

Consistent with his ongoing critique of economic inequality, Sanders, who is Jewish and spent time at a kibbutz after college, offered a plea for a more humane handling of the Israelâ€“Palestine conflict. “To be successful, we have to be a friend not only to Israel, but to the Palestinian people, where in Gaza, they suffer from an unemployment rate of 44 percentâ€”the highest in the worldâ€”and a poverty rate nearly equal to that,” Sanders said, according to a prepared text of his remarks.

Israel, he argued, is compounding the suffering with its own aggressive policies. Sanders called on Israeli Prime Minister Bibi Netanyahu to pull back settlements in the West Bank and turn over hundreds of millions of shekels in tax revenue to Palestinians. Peace, he also said, “will mean a sustainable and equitable distribution of precious water resources so that Israel and Palestine can both thrive as neighborsâ€¦Right now, Israel controls 80 percent of the water reserves in the West Bank. Inadequate water supply has contributed to the degradation and desertification of Palestinian land. A lasting a peace will have to recognize Palestinians are entitled to control their own lives, and there is nothing human life needs more than water.”

It’s also worth watching what he said on CNN last night. He’d like the U.S. to invest more in economic development in the region than in shipping arms to Israel. He also questioned why we’re hard on Iran but consider Saudi Arabia our good friends. He’s actually thought about this stuff, in other words.

Lots going on in the world, including the President’s historic visit to Cuba and the terrorist attack in Brussels, but I wanted to be sure to comment on the AIPAC speeches before they were old news, which will be any minute now …

10 thoughts on “A Carnival of Pandering: Yesterday at AIPAC”