Once upon a time — 1986, actually — the late great Mike Royko wrote a Chicago Tribune column about the lack of short Greeks in the restaurant industry. The column had been inspired by lunch at a restaurant in which the orders were wrong, the service was terrible, and the beer didn’t arrive until he’d finished his sandwich. While this was going on the manager — a young man with a brand-new college degree in restaurant management — was sitting in a corner booth cheerfully sipping coffee and studying spreadsheets, completely oblivious to what actually was happening in his restaurant. One assumes the spreadsheets told him everything was fine. Royko wrote,

I don`t want to an alarmist, but when this nation collapses, he and those like him will be the cause.

First, we had the MBA–especially the Harvard MBA–who came along after World War II and took over American industry. With his bottom-line approach, the MBA did such a brilliant job that the Japanese might soon buy the whole country and evict us.

But we`re told not to worry. Now that we don`t manufacture as much as we used to, we`ll be saved by the growing service industry.

The problem is that the service industry is being taken over by people like the restaurant manager and his corporation. They go to college and study service. Then they install computers programmed for service. And they have meetings and look at service charts and graphs and talk about service.

But what they don`t do is provide service.

Royko went on to explain that he favored restaurants run by short Greeks. They may not have bothered with spreadsheets, but they could run a kitchen and get food on a table while it was still hot. Why the Greeks had to be short I’m not sure, but this was Royko’s column.

My point is going to be that we college-educated liberals/progressives who complain about Trump voters are too much like that manager studying spreadsheets. Everybody’s got data telling them those people don’t have anything to complain about. They supported Trump only because they are ignorant racists who don’t get what the world is really like. And while there’s a lot of truth in that, that’s not the whole picture.

You need to haul your faces out of the spreadsheets and spend some significant face time with those people to get the whole picture. And by “face time” I don’t mean yelling at them about how awful they are.

Although I’ve lived in the greater New York City area for the past 30 or so years,  I am originally from small-town Missouri and am the daughter and granddaughter of mine workers. The people I grew up with are the same ones Joe Bageant wrote about in Deer Hunting With Jesus, if you’re familiar with that book. And I spent the past four months leading up to the election staying with an aunt back home, watching everything unfold from within a very red state. And there are two things that I wish I could get across to those of you who are blaming racism and misogyny alone on the result of this election.

Executive summary: The first thing is that the population of people who swung the election to Trump — and no, they were not the third-party voters — have real grievances. It isn’t just the racism, even though racism is there. Second, I cannot emphasize enough that this population never hears progressive/liberal ideas explained to them. They have no idea what Democrats stand for, except higher taxes and Big Government.

One: No matter what the data tell you, to blue-collar workers in the midwest and “rust belt” the world is a much more economically precarious place than it used to be. I realize that much of this precariousness comes from Reaganomics and the slow dismantling of the New Deal, but globalization and neoliberal policies had a hand in it as well.

There are communities all across the midwest and northeast in which, 50 years ago, a young white guy could graduate from high school one day and get a steady job paying decent wages with benefits the next day, and as long as he showed up for work on time and sober and did his tasks competently, he probably kept that job for life. The wages from the local industry — whether manufacturing or mining — stayed in the community and supported lots of locally owned retail shops, roofers, automobile dealers, restaurants, etc.

(There was always poverty on the edges, and that poverty wasn’t necessarily nonwhite poverty. Some all-white sections of the Ozarks and Appalachia have never not been sunk into poverty, because they were areas that didn’t support large-scale farming or industry. These were people the white blue-collar workers used to look down on, also, when they weren’t their cousins.)

Now mines and factories are closed, and the big employers are no longer locally owned. It’s all Walmart and other big chain stores and restaurants, out by the nearest interstate somewhere, and the once-busy Main Street shopping areas are boarded up or taken over by shabby little insurance offices and Come to Jesus Gospel Tabernacles. The profits from the chain stores don’t stay in the community but go to far away corporations and stockholders, or the Walton family. The young folks graduating high school either settle for minimum wage service industry jobs with no future or move away. If they go away to college they probably don’t come back.

Somehow, that picture doesn’t show up on the spreadsheets. There is data showing us that the white working class is under serious stress (see Juan Cole on that point), but somehow that information is not sinking in.

Compared to 1999, white workers, according to another recent study in the Commonwealth Foundation: “have lower incomes, fewer are employed, and fewer are married.” This study found other causes for the increased death rates than just the ones mentioned above, but didn’t deny the Princeton findings. Here is their chart …

See also Why Poor White Males Are the Core of Trump’s Support and The White Man Burden.

So, something’s going very wrong in this population, and yelling at them about how racist they are really isn’t helping. But it does take me to the second point.

Two: Nobody talks to those people except to manipulate or exploit them. And by manipulating and exploiting I mean stirring up racism and xenophobia and scapegoating liberalism for their problems.

If you’ve lived all your life in the liberal northeast or Pacific coast regions, this may come as a shock to you, but folks here in the heartland never, ever hear progressive/liberal arguments for anything. Right-wing hegemony is so dominant that the progressive perspective on anything is completely shut out.

I do blame television news for a lot of this, because television news (particularly the networks people actually watch here) never explains anything. It just reports the sound bites du jour. And, frankly, right-wing arguments for anything come across better on television, because they are short and simple. Cutting taxes creates jobs, for example. Now, you and I know that isn’t true except under very particular circumstances that don’t prevail anywhere in the U.S. these days, but never mind. That’s what everybody says, so it must be true. The liberal argument for raising taxes to invest in, say, infrastructure, takes more than thirty seconds to explain. It doesn’t come across on television.

I wrote this the day after the election:

A day or two ago some talking head on the teevee said that most voters couldn’t name five things Clinton stood for, but they knew what Trump stood for. I had said something like that to a Clinton supporter awhile back, and she pooh-poohed the idea and began to rattle off Clinton’s policy positions, which I knew as well as she did. But, I said, I don’t think most people who are not politics junkies are getting that information. And then I was told that if people were too lazy to study Hillary Clinton’s website to learn how wonderful she is, that was their own fault.

Harry Truman wouldn’t have made that mistake.

But the problem isn’t just Hillary Clinton, but the whole attitude of the Democratic Party. We’ve needed them to be an ideologically left-wing party for a long time. We’ve needed them to go to those rust-bucket states and sell people on progressive economics for a long time. And nobody bothered. The only messages received by most voters not in the liberal coastal states are ideologically right-wing messages.

It may stun some of you to realize that the average voter here in Heartland World really never heard five things Hillary Clinton stood for. But they didn’t. The ads she ran in the St. Louis media market were nearly all anti-Trump ads. Television news (the networks most people watch) certainly never discussed Clinton’s policy proposals. Even if you watched the debates, what she said about policy wouldn’t have translated into anything recognizable. For example, Clinton said this in the first debate:

Those words mean something to those of us with some depth of knowledge of progressive ideas. But I can assure you those words didn’t register with the blue collar workers. They would have no idea what those words even meant. “Invest” how? In education? What does that mean? Sending us back to school? And where will jobs actually come from? “Invest in you” were just empty words to them.  All Trump had to say was “NAFTA,” and people sorta kinda know what that was and that it took jobs away, and Clinton was for it. 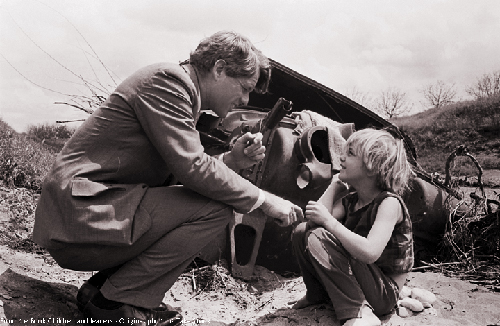 There was a time when at least some nationally known Democrats could connect to the poor white folks — the image is of Bobby Kennedy in Appalachia, sometime in the 1960s.  But in recent years the Democratic Party has seemed focused on how to win elections without their votes.

Back to the spreadsheets — if we can win x percent of these other demographics, we’re in! But it’s not working so far.

I certainly do not deny that there is a lot of racism and sexism in this population. That’s one reason those people are so easy to exploit and manipulate. And because racism especially is being exploited and manipulated, it stays alive. As a rule, whatever you feed will grow.

Sometimes it’s pretty raw; a short time back I stopped at a little restaurant/market to pick up eggs and sandwiches, and a guy having lunch there was sneering loudly that Trump was gonna defeat that woman. And the way he said it made me want to smash him in the face with a ketchup bottle (I didn’t). Another patron, a woman, was screeching that Hillary wants to rip babies out of wombs and should be shot.

But, y’know what? Nobody ever explains to people here what Roe v. Wade really says, that late elective abortions already are effectively illegal and that there’s no such thing as a ninth-month abortion.  And who is to teach them not to be sexists or racists? How do you do that, especially if right-wing demagogues are so busily keeping the racism factor pumped up? Whatever you feed will grow.

See also Michigan Democrat slams Hillary Clinton’s terrible campaign strategy: ˜How would any sane person not predict how this one would go?”

Please, blue state folks, stop trying to interpret the rest of the country from what you see on spreadsheets. And there’s nothing here I haven’t said before, but I keep repeating this stuff in the hope that somebody starts listening.