There’s a breaking story about how, last summer, the RNC tabled a proposed platform plank that called for providing arms to the Ukrainian army. A Trump ally has blabbed that this was done on the orders of Trump himself. But I’ll get back to this later.

The scandal brewing about secret ties between the Trump campaign and the Kremlin is a serious matter, but not for reasons most people think.

I run into people who to this day sincerely believe the election results should be overturned in Clinton’s favor because of Russian hacking. And I run into other people who weren’t Clinton supporters who think the whole thing is just the Democrats being overwrought because they lost the election. But it’s not about the election. The election was just a sideshow.

It’s noteworthy that the Russian hacking scandal didn’t blow up into a big bleeping deal until after Clinton had lost, even though the Washington Post had reported on the hacking of the DNC in June and the first Wikileaks release was in July. Everybody paying attention to politics had heard about the allegations that Assange was working with the Russians long before the election, in other words.

But the Clinton faction pooh-poohed the Wikileaks releases and were silent on Russian hackers until Clinton lost. Then they started screaming about Russian hacking.

However, an analysis of the timing of Wikileaks releases shows no significant impact on opinion polls. Further, the November election was something like a perfect storm of many factors that worked against Hillary Clinton, and of all those factors Wikileaks falls pretty far down the list. IMO it’s probable the election results would have been about the same without the Russian hacks.

It’s entirely possible the Kremlin did hope to tilt the election in Trump’s favor, but that’s no longer the central issue. Wikileaks was a sideshow.

The real issue is spelled out in this op ed by Susan Craig, an adjunct professor of international affairs at Washington University, St. Louis, and former intelligence analyst with the Defense Intelligence Agency.

As any intelligence professional knows, being truthful about your transgressions is the only way through the clearance process. Pirating music, falling behind on your debt payments or even smoking pot will not prevent you from getting a security clearance. But lying about those things most certainly will. Not being truthful about past misbehaviors opens you up to the possibility of blackmail by determined adversaries looking for access to our nation’s secrets.

Flynn most certainly knows this, and Russia is notoriously good at identifying such vulnerabilities. So why would Flynn engage in conversations with the Russian ambassador and then misrepresent the content of those calls to Vice President Mike Pence? In doing so, he could not have made it easier for the Russians to identify an opening.

Another thing all intelligence professionals — including Flynn — know is that the conversations of foreign officials are monitored. Surely Flynn read transcripts of similar conversations when he was the Defense Intelligence Agency director. So why would he deny the content of his conversation, while knowing that conversation was tapped by our nation’s own intelligence agencies (and most likely Russia’s intelligence services)?

This leads me to the following conclusion: Either Flynn knew he was exposing himself to the Russians for exploitation or he already was compromised. The recent revelation that Attorney General Jeff Sessions exhibited the same behavior — engaging in conversations with the Russian ambassador and then denying their very existence — leads me to the same conclusion about him. Which begs the question: Who else at the highest level of our government is facilitating Russian access and influence? What about the president? [emphasis added]

That, my dears, is why all these secret and lied-about communications with the Russians are a big bleeping deal. The word for today, boys and girls, is blackmail.Â 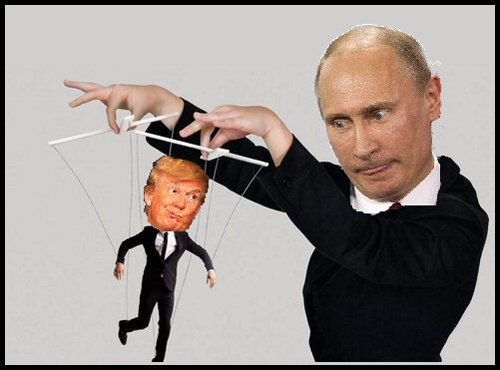 In the late 90s and early aughts, Donald Trump ran out of lenders. A string of bankruptcies on top of numerous ventures where he walked away unscathed and lenders lost their shirts convinced every major US bank to stop lending to him. The only exception is DeutscheBank, which of course is not a US bank. This put Trump’s whole family business under great strain. In response he increasingly took capital from abroad, especially from Russia and other post-Soviet successor states. … None of this is speculation. All of this happened. What we don’t know is quite the degree of his dependence on money from the former Soviet Union, both for investment capital and for the purchase the numerous apartment units which make up his ubiquitous high-rises.

If Trump had released his complete tax returns, we would know to whom he owes money. Obviously, he’s not going to release that information voluntarily. And I’ll re-link to this article I linked to yesterday, What The CIA and FBI Knew About Trump Before 2016.

And then there’s the infamous Trump dossier, allegedly held by Russians, that allegedly has compromising personal and financial information about Trump. Some of the stories about it do seem silly. But given Trump’s known history — which includes stiffing vendors and investors, ties to the mob, and outright fraud in the case of his “university” — does anyone actually doubt that the Russians have a dossier on him of stuff he’d rather not be made public? It might not be any worse than what’s already known, but of course there’s a dossier.

So today we learn that Trump ordered language about providing arms to Ukraine for defense against Russia be removed from the Republican platform. The original story was that Trump had had nothing to do with that.

In a significant reversal, a Trump campaign official on Thursday told CNN that he personally advocated for softening the language on Ukraine in the GOP platform at the Republican National Convention, and that he did so on behalf of the President.

CNN’s Jim Acosta reported on air that J.D. Gordon, the Trump campaign’s national security policy representative at the RNC, told him that he made the change to include language that he claimed “Donald Trump himself wanted and advocated for” at a March 2016 meeting at then-unfinished Trump International Hotel in Washington, D.C. …

… Yet Gordon had told Business Insider in January that he “never left” the side table where he sat monitoring the national security subcommittee meeting, where a GOP delegate’s amendment calling for the provision of “lethal defense weapons” to the Ukrainian army was tabled. At the time, Gordon said “neither Mr. Trump nor [former campaign manager] Mr. [Paul] Manafort were involved in those sort of details, as they’ve made clear.”

Discussion of changes to the platform, which drew attention to the ties to a pro-Russia political party in Ukraine that fueled Manafort’s resignation as Trump’s campaign chairman, resurfaced Thursday in a USA Today story. The newspaper revealed that Gordon and Carter Page, another former Trump adviser, met with Russian Ambassador Sergey Kislyak at the GOP convention.

Trump and his team have long insisted that his campaign had no contact with Russian officials during the 2016 race, and that they were not behind softening the language on Ukraine in the Republican Party platform.

Whatever was and is going on, the cover-up is unraveling. And it’s unraveling pretty durn fast.