I’ve been struck by the sheer amount of stupid coming from both Right and Left regarding North Korea.

From the rightie fringe, meet evangelical pastor Robert Jeffress, who has been ranting that God wants Trump to bomb North Korea and that the Bible gives Trump authority to do this. (I say that if God wants Kim Jong Un taken out, it ought to be easy to arrange a lightening bolt to do the job neatly and quickly. Intercontinental nuclear warfare is so messy.)

On the other side, the Eternal Ditz Jill Stein weirdly absolves Kim Jong Un of any responsibility whatsoever in the ongoing tensions regarding his nuclear program. She thinks that if the U.S. and South Korea weren’t so mean to KJU all the time, he’d happily stand down. Just dismantle the military systems protecting Japan and South Korea and send Kim Jong Un some flowers and a gift certificate to Olive Garden, and he’d be nice as pie.

A variation of this comes from a guy I bumped into on social media — “North Korea is not a real threat to you and I. It only threatens the 1% and their interests…now watch them drag us all into their pissing contest again.” Another common theme is that They (the U.S. government plus mainstream media) are lying to us about North Korea to distract us from what They are doing. And, you know, They lied to us about weapons of mass destruction in Iraq, so They must be lying to us about nukes in North Korea now.

I don’t think the Right will ever grasp that under most circumstances, bombing people we don’t like usually gives us worse problems down the road (see consequences of the invasion of Iraq for examples). It’s the stupid on the Left I want to address right now. I’d like to propose two theories that will be immediately hooted down by a lot of lefties:

Yes, it’s absolutely true that past U.S. decisions played a huge role in the creation of North Korea. However, don’t forget that the USSR played an equally large role. It’s also possible that had Korea not separated, the despotic Kim family would be in charge of all of Korea now, not just North Korea, and today we’d be arguing about how dumb it was to let that happen without a fight. But since we can’t go back 70 years and re-do the past, this is water under the bridge.

It’s also the case that over the years, U.S. policy has fluctuated between chest-thumping and genuine conciliation. No rightie will admit this, but in the 1990s President Clinton made some real progress with easing tensions between North Korea and everybody else. Righties will tell you that the Agreed Framework negotiated by Jimmy Carter in 1994 was a disaster, but in fact it worked pretty well, if not perfectly. Basically, the North Koreans agreed to give up nuclear weapons in exchange for aid. And lo, the North Koreans gave up processing plutonium and submitted to IAEA inspections.

So what happened? George W. Bush happened. At the time Bush II became president in 2001, the IAEA was still inspecting North Korea and reported that the plutonium processors were still sealed. But for a lot of reasons, Bush and the neocons and Republicans generally wanted the Agreed Framework to fail, and they accused the North Koreans of secretly processing uranium. This was never proved, but it was the excuse the Bushies used to end the Agreed Framework, and North Korea had a nuclear arsenal in a few short years. For more on this, see:

It’s also the case that the U.S. invasion of Iraq told North Korea it had better not disarm. The lesson the North Koreans took from Iraq was that the only way to avoid being invaded by the U.S. is to be a nuclear power.

So, yeah, the U.S. has made a lot of blunders regarding North Korea. However, no one with any knowledge of international relations or the Kim regime thinks that if the U.S. were to fold up its tents and completely retreat from Asia, North Korea would stop being a threat. North Korea is a threat because its leaders are despotic and paranoid. Michael Hirsch wrote,

Even more than other dictatorships, it is sustained by pure xenophobia, a paranoia about threats from the outside world, even as Stalinism has become a yellowing chapter in the history books elsewhere. Pyongyang’s statement that its nuclear forces “represent the nation’s life” sounds ridiculous. Yet it is a true description of the regime’s life. …

…Out in the real world, the Soviet Union collapsed, its former satellites democratized, the Chinese opened up and reformed, and even the Arab autocracies began to reform or topple. Inside North Korea, it is still 1953, and I’m not just talking about Kim Jong-un’s hairstyle. The regime’s ideology, calledÂ juche, is often simplistically defined as Korean self-reliance. In fact it has proven to be a kind of ideological superglue–a compound of traditional Korean xenophobia and nationalism, Confucian respect for authority, and utopian Marxism-Leninism that is able to resist the solvents of economic urgency or democratic modernization.

This issue is about more than just the United States and North Korea. Remember that Korea was occupied and oppressed by a militaristic Japan for a long time before the U.S. got in any way involved. But since World War II our military has ostensibly been protecting the much-resented Japan. Whether we should still have military bases in Japan today is an excellent thing to debate, and I’m personally very open to rethinking the whole Pax Americana thing. But that’s not going to help us with the immediate crisis.

In the escalating game of chicken between North Korea and the US, North Korea is showing no signs of flinching: Pyongyang has announced detailed new plansÂ for firing four ballistic missiles that would fly over Japan and land between 19 and 25 miles off the shore of the US territory of Guam.

North Korea says the plan could be ready for sign-off by North Korean leader Kim Jong Un within a week. If he does decide to launch the missiles, it would raise questions of whether the US would attempt to intercept them using theÂ THAAD missile defense system it has stationed at Guam.

If the US intercepted the missiles successfully, it would make the US look stronger, but if it failed, it would be a humiliating spectacle and a blow to the credibility of US power. So it’s not hard to see how firing missiles so close to Guam raises the stakes in the US-North Korean standoff in way the North’s previous ballistic missile tests haven’t.

Trump just had a press conference full of more tough talk. However, I don’t think the biggest thing we need to worry about is whether Trump will order North Korea to be nuked. NK borders Russia and China, and neither Russia nor China would support Trump in this. Certainly, neither China nor Russia would tolerate a U.S.-controlled state in North Korea occupied by U.S. troops. They don’t much like Kim Jong Un, but they tolerate him for the sake of stability.

North Korea does not have many friends.

It has China and, to a lesser degree, Russia, both of which oppose unilateral American military strikes on sovereign countries. The two countries believe that any US move would destabilize the region and harm their own interests. North Korea borders China and Russia, and any crisis on the peninsula would add extra strain to those borders.

(Fun fact: Did you know that if you want to drive from Finland to North Korea, you could drive only through one country? Yeah: Russia is that large.)

On its own, Russia also helps North Korea with its economic woes. Russian Railways is in discussion with the government in Pyongyang to expand the rail connectionsÂ between the two countries. Moscow also invests heavily in North Korea’s energy sector and gives Kim’s regime hard currency, which it needs to purchase foreign goods. There are also around 10,000 North Koreans in Russia as part of a guest worker program providing cheap labor to Russia.

Maybe we should be grateful for whatever dirt Vladimir has on Donald, because Vladimir sure as hell does not want a U.S. strike on North Korea.

And, frankly, I’m not seeing anywhere near the kind of relentless propaganda campaign that sold Americans on the idea that invading Iraq was a good idea, and I don’t think the Trumpettes are capable of carrying out such a campaign. They’ve made too many enemies in media and in other conservative circles to pull it off. A new CBS News poll shows only 29 percent of Americans think that striking North Korea now would be a good idea.

But here’s the thing — we’ve known for a long time that North Korea has nuclear weapons. This is not a new thing the Trumpettes just thought up.Â North Korea set off its first nuclear bomb as a test in October 2006. What’s new is that now North Korea has missile capability to deliver those weapons somewhere we don’t want nuked. Â And no one who knows anything about North Korea thinks it can be persuaded to give up nuclear weapons now. We had one shot, and Bush blew it.

My sense of things is that if somebody could duct-tape Trump’s stupid mouth for awhile, and if the U.S. were to back off and let other nations take the lead in smoothing tensions with North Korea, maybe this will blow over. For now. But these crises will keep happening until the Kim regime collapses, and I don’t much think there’s anything the rest of the world can do to force that to happen without making things worse.

And while I don’t think that the U.S. would actually strike North Korea preemptively — Trump’s stupid mouth notwithstanding — there’s always the possibility that North Korea would. And that would be a genuinely terrible thing that could easily touch off a world war, especially with Trump in the White House.

So, lefties, please stop tweeting that there’s no real danger and that They are lying to us about North Korea just like they lied about Iraq. It’s annoying. 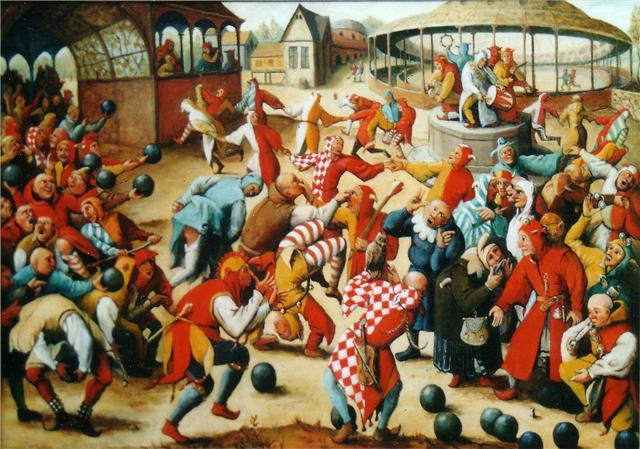 19 thoughts on “North Korea and the Carnival of Stupid”