Politico reports that the DNC is facing a massive money deficit.

The Democratic National Committee is reeling, facing a turnaround that’s proving a much bigger lift than anyone expected as it struggles to raise enough money to cover its basic promises.

Many donors are refusing to write checks. And on-the-ground operatives worry they wonâ€™t have the resources to build the infrastructure they need to compete effectively in next yearâ€™s midterms and in the run-up to 2020.

The Politico article frames this as a fundraising problem and appears to blame Tom Perez and his lack of experience. But one might ask, given that the Trump Republican Party is destroying America, why Democrats would have such a hard time raising money. One would think the DNC wouldn’t even have to ask for money.

One has to read between the lines a bit, but by doing so we learn that people are giving generously toÂ “new resistance-minded groups” and to individual candidates, the DNC is in big trouble.

See in particular this part:

Party officials involved in fundraising say donors repeatedly turn them away with a “try again next year,” especially since it became clear there won’t be an official party autopsy from 2016. Democrat Jon Ossoff’s loss in his much-hyped special congressional election in Atlanta’s suburbs in June has also depressed donor enthusiasm.

“I’ve made it pretty clear I don’t want to donate to the DNC, DCCC, or the Senate counterpart, so they have not called me,” said Northern California attorney Guy Saperstein, a part-owner of the Oakland Athletics and a prominent funder of progressive causes and candidates.

Even donors who are more willing to play ball have a stern message: The party needs a clearer plan to win before we fork over more money.

“You can’t just go to [donors] and say … ‘Support me, I’m the DNC.’ You have to rebuild the credibility,” said a longtime Democratic donor and DNC member.

DNC members themselves have now been asked to give or raise $1,000 each, some said â€” a request people who’ve been around the committee for decades say they can’t remember being made before.

Part of the problem has been the lack of major draws for the contributors. For the past eight years, much of the party’s donor strategy has been built around large events featuring Obama. … 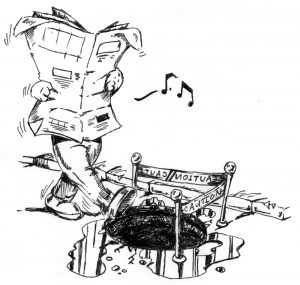 So there is no autopsy of what went wrong last year, and we’ve seen this week that they have no intention of engaging in the reforms they need to restore people’s confidence. I personally think that what went wrong last year was years in the making. The Dem Party skated far too long on the personal popularity of Barack Obama while the rest of the party went to hell. Having President Obama in the White House helped them deny that they were losing more seats in Congress, and state legislatures, and governor’s mansions, with every election. But now even that band-aid is ripped off, and what’s left? Failure, that’s what.

Eventually they’re going to blame Perez (and also Keith Ellison, who is helpless to do much as long as his auxiliary position is seen as just a sop to the Left), and they’ll put some other centrist toady in the DNC chair position who also will fail. You can see it from miles away.

The only bright spot is that while the DNC remains mired in denial and incompetence, House Democratic congressional candidates are outraising Republican ones.

House Republicans are growing increasingly alarmed that some of their most vulnerable members arenâ€™t doing the necessary legwork to protect themselves from an emerging Democratic tidal wave. In some of the biggest media markets, where blockbuster fundraising is a prerequisite for political survivalâ€”most notably in New York City, Los Angeles, and Houstonâ€”Republican lawmakers arenâ€™t raising enough money to run aggressive campaigns against up-and-coming Democrats.

Of the 53 House Republicans facing competitive races, according toÂ Cook Political ReportÂ ratings, a whopping 21Â have been outraised by at least one Democratic opponent in the just-completed fundraising quarter. Thatâ€™s a stunningly high number this early in the cycle, one that illustrates just how favorable the political environment is for House Democrats.

Republicans are frustrated with the House GOP’s inability to walk and chew gum at the same time; Democrats are throwing money at candidates they like. The DNC is frozen out, but in the still unlikely event that Dems take back the House next year, watch the DNC claim this as vindication.

6 thoughts on “How Can the DNC Be So Clueless?”