It’s hard to tell. “Cracked” Trump isn’t that different from “normal” Trump. But it’s a theory going around.

Emmanuel Macron suggests building its own army to protect Europe against the U.S., China and Russia. But it was Germany in World Wars One & Two – How did that work out for France? They were starting to learn German in Paris before the U.S. came along. Pay for NATO or not!

Granted, he never did understand what the NATO thing was all about. I’m sure a lot of people have tried to explain it to him. But Trump doesn’t do learning curves; his brain flatlined some time back.

I learned late last night that the Creature not only skipped World War I commemorations in Paris, as previously noted; he didn’t bother to go to Arlington on Veteran’s Day. Not that I want his odious corruption anywhere near where my brother is buried, but it does seem odd. And he’s changing the story about why he didn’t go toÂ Aisne-Marne American Cemetery in France on Saturday. Now he’s saying the Secret Service told him not to go.Â  Did the Secret Service tell him to not go to Arlington also? Or (more likely, I suspect) did he just not want to bother?

One strongly suspects he was meeting with Putin all those times he wasn’t at a scheduled event in Paris. Trump and Putin both turned up late in separate cars at the Arc de Triomphe, like nobody would suspect a thing.

It’s worth going to Twitter to read the comments left to this tweet, btw. Some are brilliant.

The story in the New York Times concerning North Korea developing missile bases is inaccurate. We fully know about the sites being discussed, nothing new – and nothing happening out of the normal. Just more Fake News. I will be the first to let you know if things go bad! 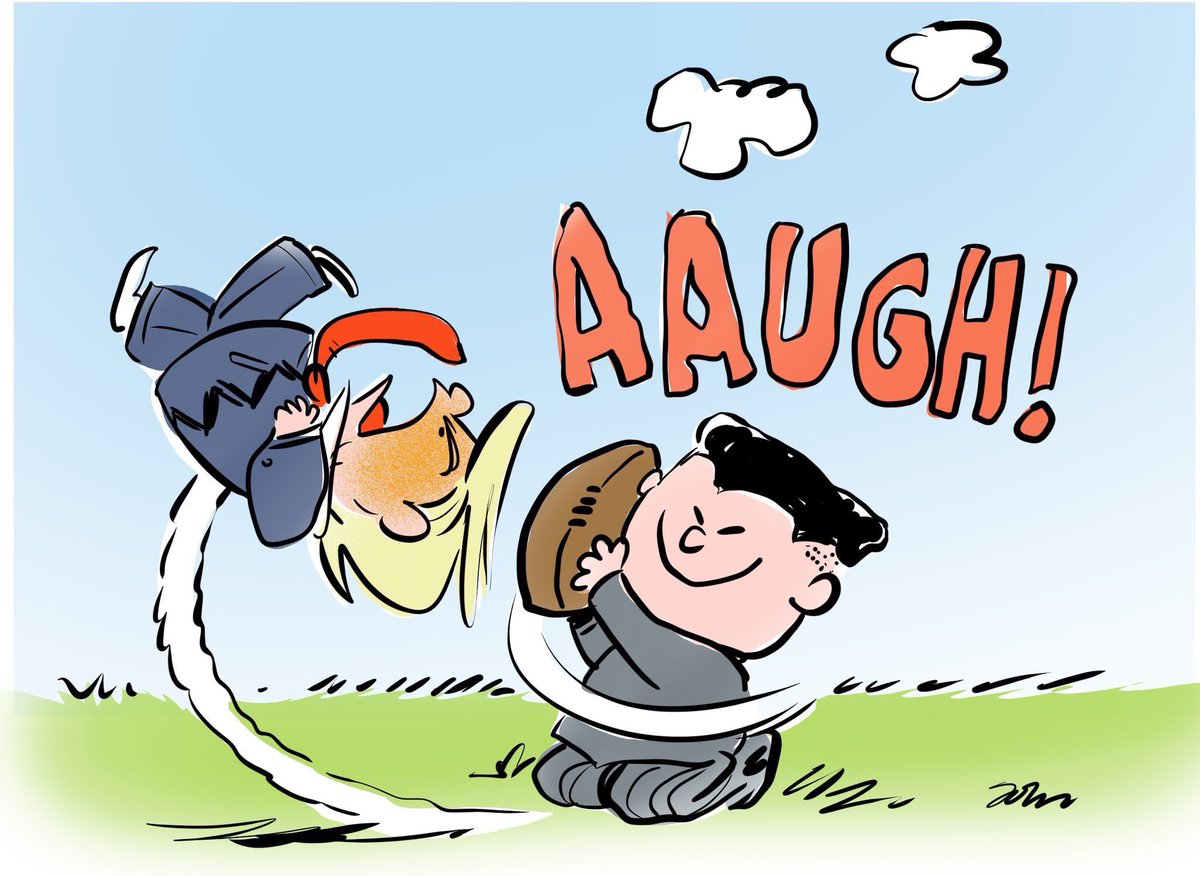 Anyway — Jennifer Rubin wrote a couple of days ago that Trump is cracking up politically, if not mentally.

… the press and the country at large should keep in mind that Trump acts out when he is weak, humiliated and cornered. Heâ€™s all those things right now:

*His performance in Europe was panned.
*The election results get worse for Republicans with each passing day.
*His greatÂ North Korea diplomacy, contrary to the gullible pundits and political spinners, was a bust. (He was snookered.)
*We now have two major Middle East problems â€” Iran and out-of-control Sunni despots who think (not unreasonably) they can lead him around by the nose.
*He is not winning the trade war, and it may be one of many factors leading to an economic pullback before the 2020 election.
*Mueller plows ahead, with possibly more indictments (e.g., Roger Stone, Donald Trump Jr.).Â The U.S. Attorneyâ€™s Office for the Southern District of New YorkÂ (aided by Michael Cohenâ€™s cooperation) has its own case(s) to pursue against Trump and/or his helpmates.
*Obamacare is here to stay. Itâ€™s more popular than ever, and red America has fallen in love with Medicaid expansion.
*Trumpâ€™s finances are no longer protected from scrutiny, nor are his daughter and son-in-lawâ€™s.

In sum, we should continue to tally Trumpâ€™s constitutional offenses just as we keep a running count of his lies. However, these offenses are part of a bigger picture of a failing president and a party incapable of breaking with him. Trump is cracking up, as is the GOP.

It is worth noticing this series of events over the last week:

1. Trump held a news conference after the midterm elections in which his affect was clearly depressed, until he engaged in a confrontation with CNNâ€™s Jim Acosta.
2. The president traveled to Paris to take part in the commemoration of the 100th anniversary of the signing of the treaty that ended WWI. He had previously cancelled his plans for a military parade, saying that he would honor the military in Paris instead.
3. On Saturday, Trump skipped the ceremony at Aisne-Marne American Cemetery in France. The White House suggested that it was because of the weather, but that didnâ€™t stop other world leaders or Trumpâ€™s staff from attending the event.
4. The president arrived two hours late to a dinner that evening with world leaders.
5. The White House announced that the president will not attend the ASEAN or APEC summits in mid-November.
6. Monday morning brought this announcement:

Trump won’t be leaving the White House today, per press office. No visit to Arlington National Cemetery on Veterans Day.

It is hard to avoid the idea that there is a pattern to all of this.

LeTourneau goes on to speculate that Trump is coming unglued mentally and emotionally. Not that he was glued all that well to begin with.

Oh, and now that the midterms are over — there are reports Bob Mueller is about to issue some new indictments.

Updated: This is in the Los Angeles Times:

For weeks this fall, an ebullient President Trump traveled relentlessly to hold raise-the-rafters campaign rallies â€” sometimes three a day â€” in states where his presence was likely to help Republicans on the ballot.

But his mood apparently has changed as he has taken measure of the electoral backlash that voters delivered Nov. 6. With the certainty that the incoming Democratic House majority will go after his tax returns and investigate his actions, and the likelihood of additional indictments by special counsel Robert S. Mueller III, Trump has retreated into a cocoon of bitterness and resentment, according to multiple administration sources. …

… Publicly, Trump has been increasingly absent in recent days â€” except on Twitter. He has canceled travel plans and dispatched Cabinet officials and aides to events in his place â€” including sending Vice President Mike Pence to Asia for the annual summits there in November that past presidents nearly always attended.

Jordanâ€™s King Abdullah was in Washington on Tuesday and met with Secretary of State Michael R. Pompeo, but not the president.

15 thoughts on “Is Trump Cracking Up? (Updated)”