The right-wing war against public education has taken various forms over the years. Indeed, some American conservatives have been hostile to public education going back to the colonial period. The modern-era war was kicked off in the 1950s and 1960s by court-ordered desegregation, which inspired a stampede of white kids into private, purportedly “Christian” schools.

Since then the Right has generated tons of propaganda about how public schools are failing. However, the righties argue, investing more tax money in them is pointless; just throwing good money after bad. And, of course, teachers unions are the work of the devil and must be broken up. The result has been something of a self-fulfilling prophecy — American public education on the whole isn’t as good as it could be if we invested more money in it. And the more Republicans can bleed public schools of tax money, the worse they get, and the more reason (Republicans say) we should put our tax money elsewhere. Preferably where their campaign donors can get their cut.

The brilliant “solution” the Right came up with to this is to funnel taxpayer dollars into various kinds of privately run schools, through charters or voucher programs. Charters started out sounding like a good idea but quickly morphed into a means for unscrupulous people to get their hands on tax dollars (see also). Unlike public schools, private schools can deny admittance to special needs students. Charter schools are not supposed to discriminate, but they’ve been known to deny admittance to students they consider undesirable.

Both voucher schools and charter schools have been around long enough that we should hold them to their claims of providing superior education. How are they doing?

Charter schools on average do not get higher test scores than public schools, and in some states—like Ohio and Nevada—charters dominate the state’s list of the lowest performing schools. Some charter schools get high test scores, but they usually get high scores by excluding students with disabilities and English learners or by high attrition rates.

Voucher studies in Louisiana, Ohio, Indiana, and the District of Columbia found that students in voucher schools actually lost ground compared to their peers in public schools. This is not surprising since some voucher schools have uncertified teachers and are free to teach a curriculum that mixes facts and religious stories.

Milwaukee has had vouchers for religious schools for two decades and charters for three decades. All three sectors get the same poor results. Milwaukee is one of the lowest performing districts in the nation.

New Orleans is the only all-charter school district in the nation. After Hurricane Katrina in 2005, a white Republican legislature imposed an experiment on a majority African American city. School enrollment declined from 65,000 before the storm to 48,000 a dozen years later. The latest state scores rated 49% of the city’s charter schools as D or F, based on their academic performance. The New Orleans district scores are below the state average, and Louisiana is one of the lowest performing states in the nation.

So the “school choice” sales point is a scam. We’d be much better off putting the money wasted on charters and vouchers into improving our public schools. But we’ll have to get Republicans out of the way to do that.

Note also that the Supreme Court appears about to lift limits on state aid to public schools.  If they do, public schools in states governed by Republican majorities will be bled dry in record time.

There is one other point I’d like to make about public versus private schools, which is that in small-town and rural America public schools are essential to maintaining a sense of community. You’d have to be from a small town to appreciate that, I suppose, but it so happens I am.

Even in a small town there may be several different churches, many of which don’t speak to each other. People are usually too spread out to meet in any kind of town square or in the village pub. About the only place everybody goes is the WalMart.

But, by golly, everybody or nearly everbody went to the public school and sends their kids to the public school. Crowds still turn out for the high school homecoming parades down Main Streets in these parts. People cheer the football and basketball teams even if they don’t have kids on the roster. Folks from many parts of the community who wouldn’t otherwise meet get involved in school programs. More than anything else, the public schools provide communities with identity and shared focus that, literally, nothing else offers.

Often the first bit of information strangers, even elderly people, exchange around here is Did you go to Local School? When did you graduate? Did you know so-and-so? He might have been in your class. And then he married that girl who was in my class. Before long, there’s a taxonomy of shared acquaintances worked out. But it nearly always starts with Where did you go to school?

When I see people like Donald Trump or Betsy DeVos running down public schools and pushing private ones, I see people who are utterly out of touch with life in rural and small town America. That is true even as they blather on about the greatness of the “heartland,” a term that gives me the willies, frankly.

Of course, another irony is that small town folks often don’t connect political propaganda to their real-world lives. They don’t make the connection that the campaign to destroy the public school system might mean destroying their public school system. Just some other public school system. Makes me crazy. So they might be sold on the idea of charter schools in the abstract but would probably revolt, eventually, if the local public school districts were gutted out to make room for them. Sometimes you don’t know what you’ve got ’til it’s gone. 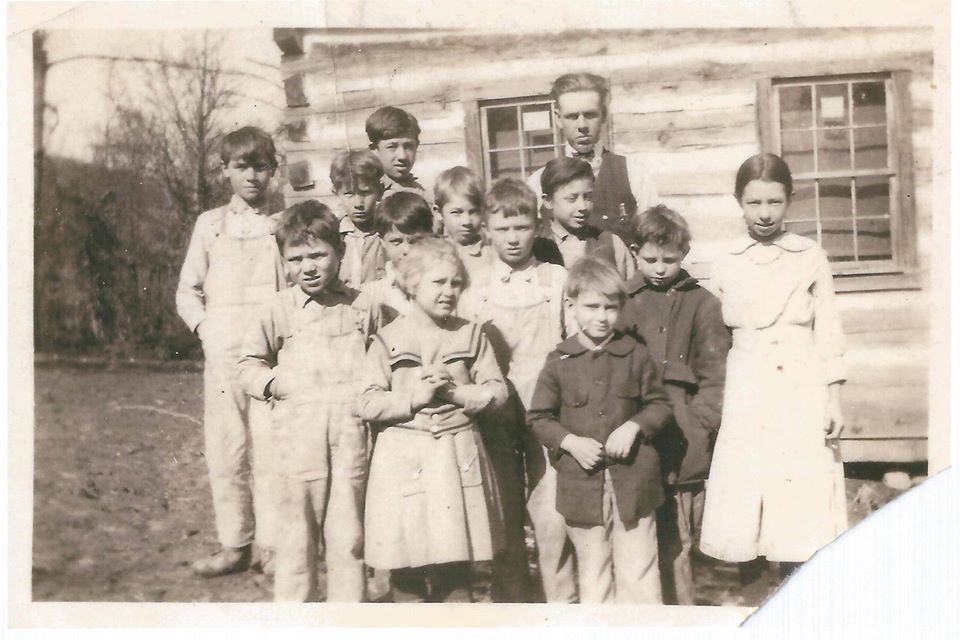 My great-uncle Lloyd Thomas and his students by their log-cabin school in southern Missouri, ca. 1910.