Kudlow, who in the past has mischaracterized the position of the World Health Organization in an attempt to reassure the financial markets, put out yet more misinformation on CNBC’s “Squawk on the Street” Friday morning.

I’m not sure why anyone still bothers to interview Kudlow, except for amusement. There is absolutely nothing that’s going to stop Covid-19 from sweeping the country. A lot of us are going to get it. Those of you who are elderly or have other health problems, please take care. The response to the virus has revealed that Trump and his administration are unfit to be in charge of anything more complicated than a can opener.

We’ve known for at least two months — probably longer — that the virus would very likely be introduced to the United States. (See the timeline.) Yet the Trumpers continue to be caught flatfooted by the spread of the disease. Note:

WHO had been alerted to a new disease spreading rapidly in Wuhan, China in December.

On January 7, China announced that a new coronavirus had been identified.

On January 13, WHO announced a case in Thailand, the first outside China.

The first case in the U.S. was diagnosed on January 20; the patient was a man who had recently visited Wuhan.  He had been sympomatic for about four days before he was tested.

Eleven days later, on January 31, the Trump Administration finally announced restrictions on travel to and from China.

By early February the virus had been found in several countries. On February 5, more than 3,600 passengers, some infected and some not, were quarantined on board the Diamond Princess cruise ship, anchored off Yokahama, Japan.

On Friday, February 21, stocks closed sharply lower on fears of the disruptions caused by the spreading virus.

On Monday, February 24, the Trump Administration began to prepare for the virus to spread in the United States. The administration requested Congress to allocate $1.25 billion in new emergency funds and also called for taking $1.25 billion from other federal programs and using them for whatever it was they planned to do to slow down the virus. Some members of Congress warned the administration that wasn’t nearly enough.

On February 24, when the Trump Administration began to stir itself and pay more attention to the virus, there were 34 confirmed cases in the U.S. As of March 6,  the CDC is reporting a total of 164 cases in the U.S., in 19 states, with 11 deaths. But there are almost certainly many more Americans infected with the virus, since we are way behind where we should be in testing. And that brings us to the woeful saga of the test kits.

The first test kits issued by the CDC, and I’m not sure when that was, were flawed. And we’ve been playing catch up ever since. Do read Robinson Meyer and Alexis Madrigal, The Strongest Evidence Yet That America Is Botching Coronavirus Testing.

On Monday, Stephen Hahn, the commissioner of the Food and Drug Administration, estimated that “by the end of this week, close to a million tests will be able to be performed” in the United States. On Wednesday, Vice President Mike Pence promised that “roughly 1.5 million tests” would be available this week.

Notice that “Monday” was March 2, which was already late.

But the number of tests performed across the country has fallen far short of those projections, despite extraordinarily high demand, The Atlantic has found. …

… Through interviews with dozens of public-health officials and a survey of local data from across the country, The Atlantic could only verify that 1,895 people have been tested for the coronavirus in the United States, about 10 percent of whom have tested positive. And while the American capacity to test for the coronavirus has ramped up significantly over the past few days, local officials can still test only several thousand people a day, not the tens or hundreds of thousands indicated by the White House’s promises.  …

… In South Korea, more than 66,650 people were tested within a week of its first case of community transmission, and it quickly became able to test 10,000 people a day. The United Kingdom, which has only 115 positive cases, has so far tested 18,083 people for the virus.

In typical Trump Administration fashion, the various spokespeople have made conflicting statements about what’s happening with the test kits. As the Atlantic article says, there is no official information available anywhere about how many kits will eventually be delivered where. And the CDC announced this week it would stop publishing testing results, as it normally does during an epidemic, leaving us further in the dark.

According to Politico, most other countries have been using tests supplied by WHO that appear to work and have been distributed quickly. But not the United States.

Why the United States declined to use the WHO test, even temporarily as a bridge until the Centers for Disease Control and Prevention could produce its own test, remains a perplexing question and the key to the Trump administration’s failure to provide enough tests to identify the coronavirus infections before they could be passed on, according to POLITICO interviews with dozens of viral-disease experts, former officials and some officials within the administration’s health agencies.

The slowness of the testing regimen — which, administration officials acknowledged this week, is still not producing enough tests to meet the national demand — was the first, and most sweeping, of many failures. So far there have been confirmed cases in at least 23 states, and at least 15 deaths, while the stock market plunged and an otherwise healthy economy braced for a major disruption.

But neither the CDC nor the coronavirus task force chaired by Vice President Mike Pence would say who made the decision to forgo the WHO test and instead begin a protracted process of producing an American test, one that got delayed by manufacturing problems, possible lab contamination and logistical delays.

The CDC itself had already been compromised by Trump’s decisions to gut much of it: You’ve probably heard that in 2018 Trump eliminated the U.S. pandemic response team to save money. And there’s more. See Trump spent the past 2 years slashing the government agencies responsible for handling the coronavirus outbreak in Business Insider. The next administration will have to do some work to restore the CDC to its former level of competence.

It doesn’t help that the head of the CDC, Dr. Robert Redfield, came into the job in 2018 with dubious qualifications. CNN at the time of Redfield’s appointment:

Redfield’s early engagement with the AIDS epidemic in the US in the 1980s and 90s was controversial. As an Army major at Walter Reed Medical Institute, he designed policies for controlling the disease within the US military that involved placing infected personnel in quarantine and investigating their pasts to identify and track possible sexual partners. Soldiers were routinely discharged and left to die of AIDS, humiliated and jobless, often abandoned by their families.

In the 1980s Redfield worked closely with W. Shepherd Smith, Jr. and his Christian organization, Americans for a Sound AIDS/HIV Policy, or ASAP. The group maintained that AIDS was “God’s judgment” against homosexuals, spread in an America weakened by single-parent households and loss of family values.

Redfield wrote the introduction to a 1990 book, “Christians in the Age of AIDS,” co-written by Smith, in which he denounced distribution of sterile needles to drug users and condoms to sexually active adults, and described anti-discrimination programs as the efforts of “false prophets.”

In the early 1990’s, ASAP and Redfield also backed H.R. 2788, a House bill sponsored by deeply conservative Rep. William Dannemeyer (R-California). It would have subjected people with HIV to testing, loss of professional licenses and would have effectively quarantined them. (The bill died in Congress.) In the 2000s, Redfield was a top advocate for the so-called “ABCs of AIDS” in Africa, pressing to prevent HIV infection through sexual abstinence, monogamy and the use of condoms only as a last resort.

There’s more; it goes on and on. The clowns are running the circus.

… during the press conference, Trump urged people to stay calm and dismissed any criticism against the government’s handling of the virus, stressing in particular the availability of Covid-19 tests.

“As of right now and yesterday, anybody that needs a test [can have one], that’s the important thing, and the tests are all perfect, like the letter was perfect, the transcription was perfect,” Trump said, referring to the White House transcript of his call with Ukrainian president Volodymyr Zelensky in which he requests an investigation into his political rivals.

In fact, perhaps the most concerning aspect of the CDC conference was how it gave us a glimpse into Trump’s view of the coronavirus as a political rather than health-based issue.

During his remarks, Trump said he would rather have the passengers of the Grand Princess, a cruise ship docked in San Francisco with 21 confirmed cases onboard, stay on the ship than move to the land — all because doing so would raise the number of total Covid-19 cases in the US.

“I would rather because I like the numbers being where they are,” Trump said. “I don’t need to have the numbers double because of one ship that wasn’t our fault. And it wasn’t the fault of the people on the ship either, okay? It wasn’t their fault either and they’re mostly Americans. So, I can live either way with it. I’d rather have them stay on, personally.”

Such a mensch. He takes his responsibilities to we, the people, so seriously. (/sarcasm) 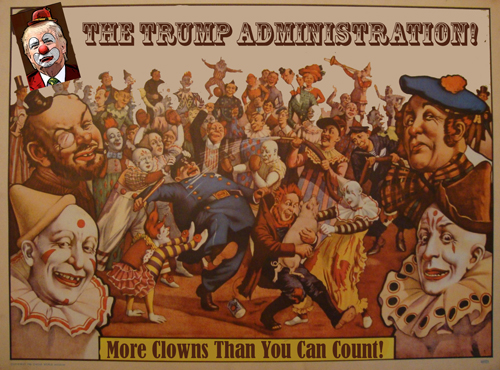