Trump’s address last night was such a disaster the markets dropped like a rock as soon as Trump said “God bless America.” The Dow Jones average was down more than 2,000 points at one point today, but it recovered a tad after the Federal Reserve announced it would inject $1.5 trillion into bond markets. See also Something Weird Is Happening on Wall Street, and Not Just the Stock Sell-Off.

As Trump read from a teleprompter, his inflection often was odd, and at moments he seemed out of breath. He also botched his own message. For example, in announcing a ban on travel from Europe, he said,

There will be exemptions for Americans who have undergone appropriate screenings, and these prohibitions will not only apply to the tremendous amount of trade and cargo, but various other things as we get approval. Anything coming from Europe to the United States is what we are discussing.

Daniel Larisen at The American Conservative:

Administration officials had to issue multiple clarifications to reassure the public that the president had not meant what he had just told us. It turns out that “Europe” only refers to people who have been in Schengen zone nations, and it doesn’t apply to goods at all.

Trump pointedly exempted the UK from the travel ban. Ireland is exempted also. Trump owns resorts in the UK and Ireland.

Earlier this week, I met with the leaders of health insurance industry who have agreed to waive all co-payments for coronavirus treatments, extend insurance coverage to these treatments, and to prevent surprise medical billing.

Not long after his speech, however, a representative for the insurance-industry group America’s Health Insurance Plans told Politico that major health insurers had agreed to waive co-pays only for coronavirus testing, not the far more costly coronavirus treatments.

And testing still is not happening. As of Wednesday morning, the CDC had tested only 77 people for the coronavirus since Sunday. Trump crows because there are more infections in Europe, but we have no idea how many people are infected here.

This was not a speech. This was a cry for help, an SOS from a guy who knows, as Micheal Ray Richardson once put it, that the ship be sinking. You could almost imagine thousands of tiny feet running for lifeboats behind his eyes. You could see him reacting to storm sirens only he could hear. He is thrashing and floundering and he is surrounded by thrashers and flounderers who owe their entire careers to him now. This isn’t chaos. It is surrender to it.

The brief speech revealed that Trump is not dealing with the reality that the virus is already spreading here. We don’t know what’s going to happen, but it’s a safe bet that the situation will get worse before it gets better.

Which leads me to my real point, which is that the November election may well be determined by events that haven’t happened yet. This is why it’s pointless to claim (as many do right now) that our probable Democratic nominee, Joe Biden, can’t be elected.

I personally believe that Biden would have been elected had he run in 2016, if only because it was a terribly close election and he didn’t have half of Hillary Clinton’s negative baggage. That’s not something that can be proved, of course.

But do consider how much unexpected events change presidential fortunes. Were it not for the financial crisis of 2008, it’s very possible Barack Obama would not have been elected, for example. Hurricane Sandy may also have helped President Obama’s re-election, since Obama is famous for his grace under pressure, and Mitt Romney isn’t. Approval ratings for George W. Bush lept after September 11 and sagged after Hurricane Katrina, although unfortunately Katrina happened too late to keep Dubya from getting a second term.

So now Trump’s beloved stock market is tanking, and while it will likely recover well enough in time, the economy itself is going to be in shock for the next several months. Lots of people will have lost wages. Lots of businesses will have lost lots of income. It’s going to take a while to recover from that. And the more Trump tries to step up, the worse he looks.

It has to be said that Joe Biden is not someone I would have picked out of a lineup as The Man for Our Times. He is a creature of the status quo. There is much about his record I do not like. He was never the sharpest tack in the box, and I have wondered publicly if he’s even less sharp now.

But compared to Trump, Biden is Winston Churchill during the Blitz. Zack Beauchamp writes at Vox that while Biden’s remarks today on the coronavirus were unexceptional, Trump’s bumbling efforts make Biden seem strong and presidential. And while Biden may be famous for gaffes, he can speak extemporaneously in complete sentences most of the time. Trump cannot.

I’ve long thought that you can fool the American people about foreign policy all day long, but when something goes wrong in their own backyard they eventually notice. What’s about to happen in communities around the country will be hard to explain away.

I imagine that a lot of Republican politicians are getting an earful today from a lot of their deep pocket donors who have watched billions of their dollars evaporate over the past few days. However, it may be too late for the GOP to step back from being the party of Trump. 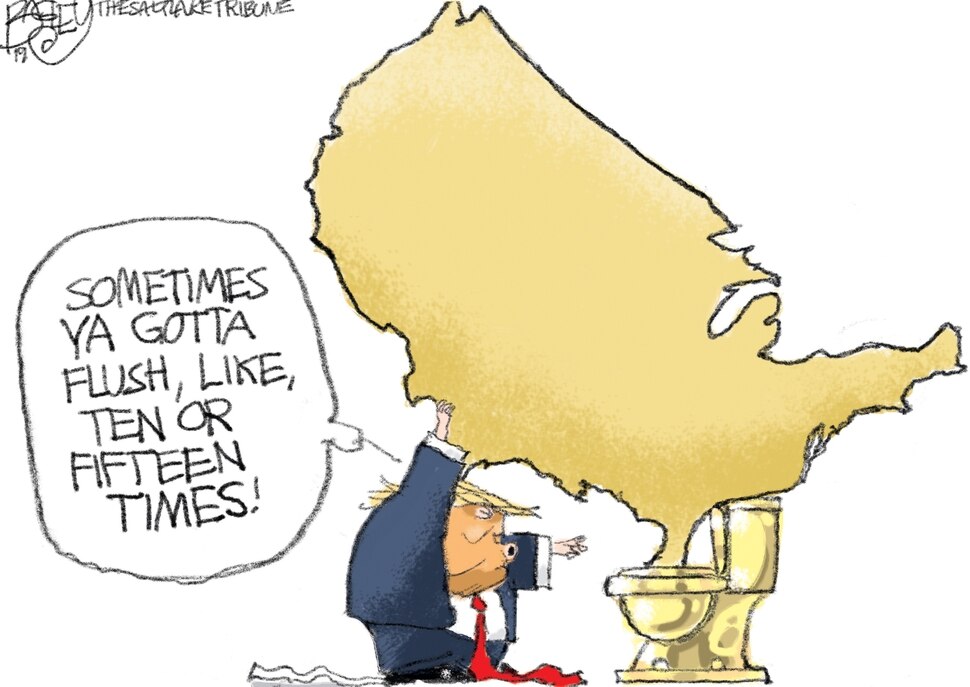