If you want to watch the Jonathan Swan interview of Trump, here it is.

I tried to find a free transcript, but failed. But a lot of it has been posted in news stories. In short, it is appalling.

Asked how he can say the pandemic is under control when roughly 1,000 Americans are dying from Covid-19 each day, Trump said, remarkably, that “it is what it is.”

“They are dying. That’s true. It is what it is. … It’s under control as much as you can control it.”

On the topic of America’s struggles with coronavirus testing, including long wait times for test results that render testing almost worthless, Trump resorted to making stuff up.

“There are those that say you can test too much. You know that?” Trump said at one point.

“Who says that?” Swan responded.

“What books?” Swan challenged, but no answer was forthcoming. Instead, Trump said that “when I took over we didn’t even have a test” — as if the Obama administration was supposed to develop a test for a virus that didn’t exist until nearly three years after Trump’s inauguration.

A few minutes later, just as he did on Wallace’s show, Trump waved around pieces of paper with charts and graphs in an unconvincing effort to make it seem as though the US coronavirus death toll of more than 150,000 isn’t as bad as it seems.

Trump responded by suggesting South Korea is faking its numbers. But when Swan challenged him on that point, Trump quickly changed the topic back to his pieces of paper.

“I mean, 1,000 Americans die a day,” Swan responded. “If hospital rates were going down and deaths were going down, I’d say terrific, you deserve to be praised for testing. But they’re all going up!

There was a long exchange between Swan and Trump in which Trump kept insisting deaths were going down, and then Trump would say well, they’re going down in Arizona. (True, but the numbers tend to spike up and down, which may be irregular reporting.) The latest data I could find are in these tweets:

Here are all the sources for our global testing database https://t.co/5Bq4VxEJtD

And below is the latest data on the comparison between the US and Europe – case rate on the left; death rate on the right.

Again, the top chart does not represent number of cases, but the rate of positive results of tests. The bottom charts represent the rate of cases and deaths per million people. This ain’t good, folks.

Philip Bump at WaPo writes that Trump doesn’t appear to understand how bad the pandemic really is.

President Trump came prepared, or so it seemed.

When he sat down for an interview with Axios’s Jonathan Swan last week, Trump held a number of loose sheets of paper, each with a graph that, he clearly believed, showed how well the United States has done in combating the coronavirus pandemic. He had a graph showing the number of tests completed in the United States, for example, a soaring line rising above other countries tallying the tens of millions that have been conducted over time. Another had a simple bar chart, four colored rectangles demonstrating his administration’s success.

These were the emperor’s clothes, and he was proud of them. But Swan, given one of the few opportunities for a non-sycophant to interview the president, revealed them for what they were. Trump was left fumbling, unable to rationalize his repeated claims that all was well. Because, of course, it isn’t.

“Right now, I think it’s under control,” Trump said at one point. “I’ll tell you what—”

“How? A thousand Americans are dying a day,” Swan interjected.

“They are dying, that’s true. And you ha— It is what it is,” Trump replied. “But that doesn’t mean we aren’t doing everything we can. It’s under control as much as you can control it. This is a horrible plague that beset us.”

“You really think this is as much as we can control it? A thousand deaths a day?” Swan said.

“I’ll tell you, I’d like to know if somebody—” Trump began, then switched directions. “First of all, we have done a great job.”

He then went into his standard patter about ventilators and protective equipment. This has emerged as a standard defense mechanism for the president: What he’s done is the best that could have been done, and nothing he hasn’t done would have been useful to do until such time as he does it. The number of tests completed is an unalloyed success, although the slow ramp-up in testing allowed the virus to spread without detection for weeks this spring, spurring massive numbers of deaths. To Swan, Trump blamed this on his having taken office without there being a test for the virus — a virus that emerged in humans more than two years after Trump became president.

Seriously, in the interview he blamed Obama for there not being a test, and he gave himself massive credit for having eventually come up with a test, even though the U.S. was way behind the rest of the world in coming up with a test.

Even within the confines of Trump’s bounded successes, though, it quickly became apparent that he didn’t have a grasp on what was happening with the pandemic. He was holding numbers in his hands, but didn’t understand what they showed and, importantly, what they didn’t.

I think it’s entirely possible his staff is feeding him carefully, um, prepared versions of what’s happening so that he doesn’t have a meltdown.

“Right here,” he said at one point, showing Swan a chart, “the United States is lowest in— numerous categories, we’re lower than the world.”

“Lower than the world?” Swan asked. “What does that mean?”

He handed Swan the sheet of paper, allowing the reporter, at least, to actually understand what Trump was claiming.

“You can’t do that,” Trump replied.

Whatever “cases of death” means. Swan threw some real data at him for South Korea — Fifty-one million population, 300 deaths — and Trump just dismissed it as misreported statistics.

Bump goes on to explain that Trump is focused on the ratio of deaths to cases because, a few weeks ago, that ratio was looking pretty good for the U.S. The number of cases was going up, but the number of deaths was lagging behind. “Lagging” is the operative word here; time has passed, and the rate of deaths is going up now, too. Sort of the way winter follows fall and night follows evening. More cases will eventually lead to more deaths, although not right away.

“There’s never been anything like this,” Trump said. “And by the way, if you watch the fake news on television, they don’t even talk about it. But, you know, there are 188 other countries right now that are suffering— some proportionately far greater than we are.”

The example he used was Spain, which he said was “having a big spike.” Spain has been averaging 2,600 new cases a day over the past seven days and five deaths, according to data from Johns Hopkins. The United States has seen nearly 60,000 new cases per day and a bit over 1,000 deaths. Looking at those number as a function of population — which Trump endorses here — we see that Spain is seeing 56 new cases per million residents each day and 0.1 deaths, compared to 184 cases and three deaths in the United States.

Again, my suspicions are that he doesn’t grasp any of this and is just using data his dutiful staff prepare for him to keep him from taking off their heads.

On Tuesday morning, Politico published an article looking closely at how the White House operates under its new chief of staff, former North Carolina congressman Mark Meadows. One White House staffer who spoke with Politico’s reporters said that Meadows and his team were protecting Trump from bad political news.

“I don’t know if they’re giving him the whole picture,” the official said, calling the group “Kool-Aid drinkers.”

Not that it would matter if they did tell him the truth. He still wouldn’t do anything about it.

But perhaps Trump’s most tone-deaf remarks were reserved for the end when Swan asked him a string of questions about racial inequalities and his reaction to the death of John Lewis.

Presented with a statistic that succinctly illustrates systemic racism in the country — “Why do you think Black men are two and half times more likely to be killed by police than white men?” Swan asked — Trump dodged with an equivalency.

“I do know this: that police have killed many white people also,” he said.

After Trump claimed he’s done “more for the Black community than anybody with the possible exception of Abraham Lincoln, whether you like it or not,” Swan asked him: “You believe you did more than Lyndon Johnson, who passed the Civil Rights Act?”

Here Swan asked, “You think the Civil Rights Act was a mistake?” Trump changed the subject.

The interview closed with what should’ve been a softball — “How do you think history will remember John Lewis?” Swan asked. But instead of paying lip service to Lewis’s record as a Civil Rights icon, Trump denigrated him for the pettiest of reasons.

“Taking your relationship with him out of it, do you find his story impressive, what he’s done for this country?” Swan followed up.

“He was a person that devoted a lot of energy and a lot of heart to civil rights. But there were many others also,” Trump demurred.

Small and petty to the end. There’s more, but you get the picture. 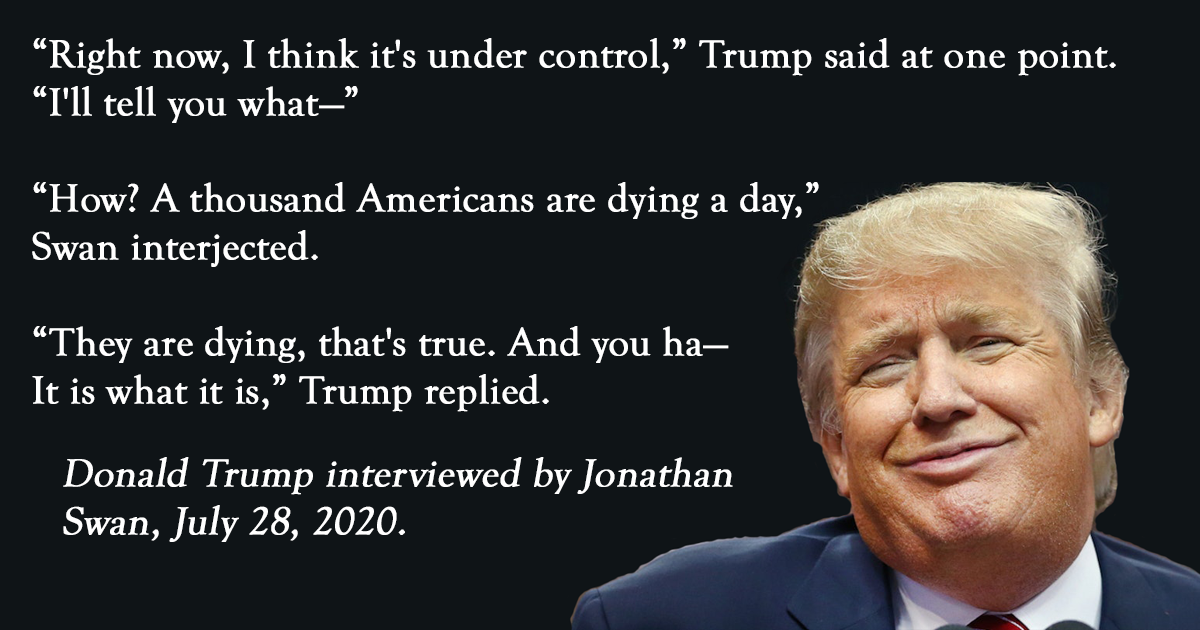 13 thoughts on “The Jonathan Swan Interview”