A week after election day, a dwindling number of votes are still being counted and few states remain uncalled. They are still counting votes in Arizona, where Biden’s lead is shrinking, and a few media outlets are leaving the state uncalled. However, Fox News called Arizona for Biden on election night. And that may have been significant, no matter who eventually wins the state.

Trump’s plan– which he had publicly spelled out — was to capitalize on an expected Electoral College lead on election night. He would declare victory and then send in teams of lawyers to stop the count of mail-in votes. Nancy LeTourneau writes that Trump was expecting to lose Wisconsin and Michigan, but he didn’t need them to pull off the scam as long as he was ahead in the remainder of the “swing” and red states on election night. But when Fox called Arizona for Biden, the plan was spoiled. “With Arizona gone, Trump would have no clear path to 270 electoral votes,” LeTourneau said.

Over the past week a number of journalists covering the Trump campaign have written that the election night mood went suddenly sour when Fox called Arizona. See McKay Coppins at The Atlantic, When the MAGA Bubble Burst, at the Atlantic, for example. Yesterday Sarah Ellison and Josh Dawsey at the Washington Post added more details about what went down when Fox called Arizona.

Trump erupted in anger, telling others in the White House to “get that result changed,” a senior administration official said. His chief of staff, Mark Meadows, phoned Fox News’s decision desk repeatedly. Top aide Hope Hicks, who had returned to the White House earlier this year after a stint at Fox Corp., messaged Raj Shah, a former Trump White House staffer whom she hired at Fox, about how to get the call reversed. Kellyanne Conway got in touch with Fox News chief political anchor Bret Baier to complain. Jared Kushner reached out to Fox Corp.’s billionaire owner, Rupert Murdoch.

But even as White House officials vowed to Fox executives that they had data from Arizona Gov. Doug Ducey (R) demonstrating that Trump could still win, and as all the other major networks continued to hold off on a call, Fox decision-desk chief Arnon Mishkin remained unmoved. Stick with us, he and his deputies told the anchors. We’ll be right. And that was the path Fox News chose.

Since then, while some of its most virulent bobbleheads have continued to push allegations of fraud and irregularities and dastardly Democratic tricks, the news side of the Fox organization has stood by the Arizona call. On Saturday Fox declared Biden the winner sixteen minutes after CNN had done so. WaPo’s Ellison and Dawsey write that Trump appeared to be angrier at Fox than he was at losing.

I doubt Trump has completely given up on the plan to use the courts to flip enough states to pull off a win, but doing so would be beyond messy at this point. The Administration is not conceding or cooperating in the Biden transition. A headline at the Independent (UK) worried me — Mike Pompeo says there will be a ‘smooth transition to second Trump administration’ — but then it appears Pompeo was joking. Maybe.

See also Republicans Escalate Effort to Challenge Biden Election Victory from Bloomberg. My guess is that Barr, McConnell, et al. don’t seriously think that they can overturn the election but are trying to undermine the Biden Admnistration. I also suspect a lot of Republicans are waiting for Trump to signal that he’s adjusted to losing before they acknowledge Biden’s win. Whether that happens before inauguration day is anybody’s guess.

Here’s an interesting story that says Trump may try to cut some kind of deal with somebody before he accepts defeat and vacates the White House.

So what does a former New York City real estate developer demand when 75 million voters, the Constitution, the Electoral College, and 238 years of peaceful transfers of power stand in his way? My friend wonders: “Maybe he believes he can trade for a favorable resolution on his $86 million IRS tax audit. Or a pardon on his New York State investigation. Who knows?”

There has been less acting up by Trump supporters than I expected, although of course they are still all over social media declaring the election ain’t over. And the infamous Q has been silent since Election Day, which is beginning to cause panic among the faithful.

Over the next few days I expect a continued struggle between the Biden transition team and the Trump Administration. However, the wheels of tradition will continue to turn, and the attention of the nation is likely to move on to Thanksgiving, Christmas, and the Georgia Senate races. My biggest question is whether Trump will actually remain in Washington for Biden’s inauguration or skip town ahead of schedule. I think the latter is more likely. 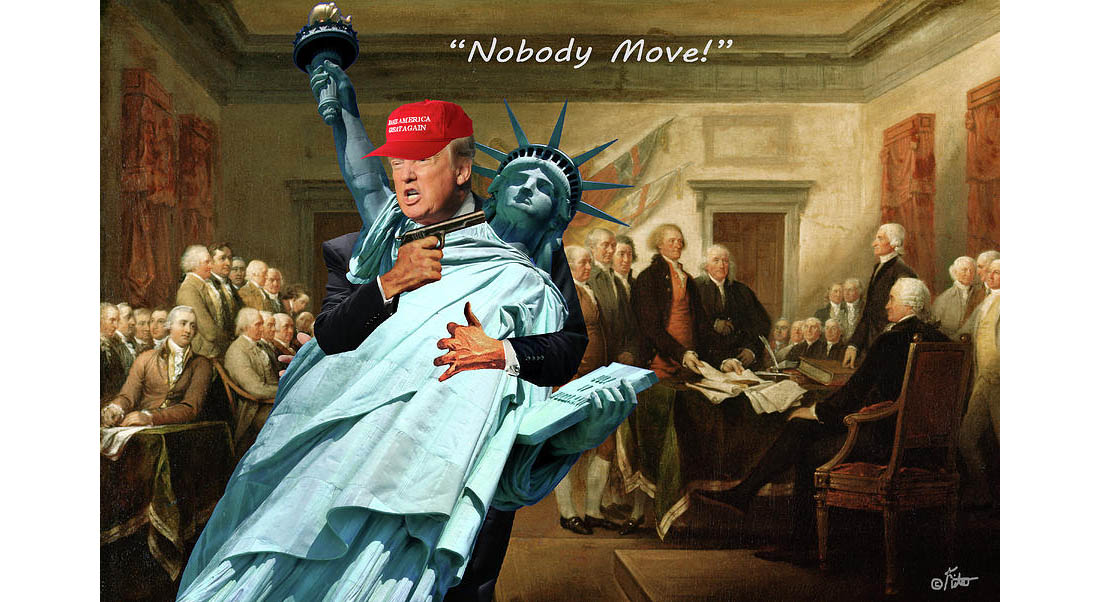