I’m seriously having a hard time keeping up with all this. But let’s start with Jonathan Martin and Maggie Haberman at the New York Times, How Trump Hopes to Use Party Machinery to Retain Control of the G.O.P.

Ronna McDaniel, Mr. Trump’s handpicked chairwoman, has secured the president’s support for her re-election to another term in January, when the party is expected to gather for its winter meeting. But her intention to run with Mr. Trump’s blessing has incited a behind-the-scenes proxy battle, dividing Republicans between those who believe the national party should not be a political subsidiary of the outgoing president and others happy for Mr. Trump to remain in control of it. …

…Mr. Trump will have no political infrastructure once he leaves office except for a political action committee he recently formed, and absent a formal campaign, he is hoping to lean on the R.N.C. to effectively give him one, people familiar with his thinking said.

This is especially intriguing:

The continuing influence of Mr. Trump could also have implications for some of the national committee’s most critical assets: Its voter data and donors lists contain thousands of names of contributors and detailed information about supporters. The voter data in particular is a focus of attention, after distrust arose between the committee and the Trump campaign over the data’s use in the final months of the campaign.

While the committee and the Trump campaign are in the process of untangling joint agreements over access to that information, Mr. Trump sees control of the lists that he helped build over the past four years as a way to keep a grip on power — and to neutralize potential challengers for supremacy over the party, according to Republicans close to the White House.

Trump is making noises about running for another term in 2024, which could inhibit other candidates from putting themselves forward.

See also Alex Isenstadt at Politico, Trump threatens to wreak havoc on GOP from beyond the White House.

President Donald Trump has spent the three weeks since he lost the election savaging a pair of GOP governors for not backing his claims he was robbed.

Republicans are worried it’s just the start of what’s in store from the soon-to-be-former president.

Trump’s attacks on Govs. Brian Kemp of Georgia and Mike DeWine Ohio — both of whom are up for reelection in 2022 — has led to broader concerns within the party that he will use his post-presidency to exact revenge on perceived enemies and insert himself into races in ways that are not helpful.

There is talk that Trump voters plan to boycott the Georgia Senate runoff elections. I’ve seen this reported in several places. It might not pan out, of course. But it does bring up the question of how much of the Republican voter base is now assimilated into the MAGA-Borg, and whether those voters will bother to turn out if Trump isn’t on the ticket.

And this brings us to David Atkins, Washington Monthly, Can Republicans Get Trump-Style Turnout Without Trump on the Ballot? The short answer is, maybe. Or maybe not. This analysis is worth reading all the way through. Much that will happen over the next decade will depend on whether Trumpism will turn out voters without Trump on the ballot. If so, we’re screwed. If not, there is hope.

While Trump is stabbing Brian Kemp in the back — and he tried so hard for so long to be a good toady — Trump may need to be watching his own back. This is from Marcy Wheeler:

Amid reports that Ronna not-Romney McDaniel is the favorite to become RNC Chair again — which stalwarts view as Trump’s attempt to run the RNC as his own operation, undercutting any challengers in 2024 — I find this quote in the WaPo story particularly interesting.

A fresh indication that Trump’s options are dwindling came Friday from an organization with close ties to his education secretary, Betsy DeVos. The conservative Michigan Freedom Fund, which the DeVos family finances, issued the following statement Friday: “The election is over. The results are in, and here in Michigan, they’re not going to change.”

There have been hints that Betsy and Dick were tiring of Trump already. Betsy’s former Chief of Staff, Josh Venable, even joined one of the anti-Trump groups during the election.

That has interesting implications for the fate of two men — Betsy’s brother Erik Prince and Trump himself.

Oh, dish, Marcy. You really need to read this all the way through. Basically, the Prince-DeVos faction has closer ties to Mike Pence than to Trump, and collectively this Prince-DeVos-Pence faction could post a real threat to Trump. They know things, and once Trump is no longer president they have no reason to do Trump any favors. 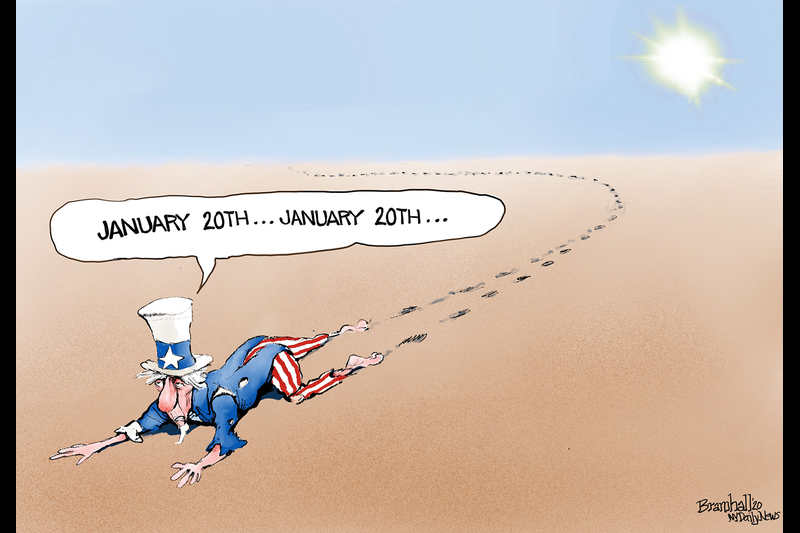