Here’s a bit of random background. There is a lot of background to choose from, but I just learned this bit today, so it’s on my mind.

In 2019, Megan Montgomery was rushed to a hospital in Birmingham, Alabama, with a gunshot wound in her arm. The shooter was her husband, Jason McIntosh, a local police officer. NBC reports what happened next.

Police took her husband’s pistol away. Nine months later, the state’s top law enforcement agency gave it back, despite pending domestic violence charges and an active protective order. Just 16 days after that, he used the gun to shoot and kill her during another late-night dispute.

Of course he did. Even McIntosh’s lawyer thinks the state was nuts to give him his gun back. In the United States, a woman is killed by an intimate partner every nine hours, the NBC article says. And in spite of laws calling for domestic abusers to lose their access to firearms, these laws are rarely enforced. Why?

Experts say the reason is a combination of deference to gun rights on the part of judges and other officials, the absence of a defined procedure to remove the guns, and a lack of awareness by law enforcement about just how lethal the risk can be. 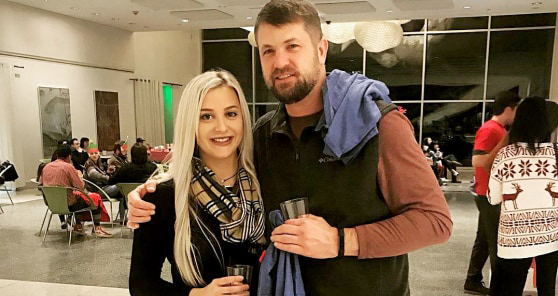 Megan Montgomery and Jason McIntosh in 2019.

Now, with that in mind, let us turn to California, where a U.S. District Judge named Roger Benitez has overturned the state’s 32-year-old assault weapons ban. Benitez called the ban a “failed experiment” and also compared the infamous AR-15 rifle to a Swiss army knife — “a perfect combination of home defense weapon and homeland defense equipment.”

U.S. District Judge Roger Benitez said that the way California has described the military-style rifles that are illegal to own means law-abiding citizens of the state can’t have weapons that most other states allow. The restrictions on the use of the weapons are “hereby declared unconstitutional and shall be enjoined,” Benitez wrote.  …

… Benitez also criticized the news media, saying that it’s their fault assault weapons have a bad reputation. “One is to be forgiven if one is persuaded by news media and others that the nation is awash with murderous AR-15 assault rifles. The facts, however, do not support this hyperbole, and facts matter,” he wrote. “In California, murder by knife occurs seven times more often than murder by rifle.”

I do not have data on precisely how murders are committed in California, but in the U.S. as a whole the overwhelming majority of homicides are committed by firearms. “Knives or cutting instruments” are a very distant second. Of course, maybe he’s saying that if Californians could get their hands on more AR-15s, maybe the state’s homicide rate (currently 4.5 per 100,000 residents) could be bumped up to rival Mississippi’s (15.4 per 100,000 residents)!

If you’re wondering, Benitez is a George W. Bush appointee, and he has a history of pro-gun rulings. In a November 2020 news item in the San Diego Union-Tribune, reporter Greg Moran wrote that California Attorney General Xavier Becerra formally objected to a gun law case being assigned to Benitez.

Benitez has issued rulings striking down the laws banning high capacity ammunition magazines and requiring background checks for people buying ammunition in the past two years. He is also now hearing two other cases from Second Amendment advocates, one dealing with the state’s assault weapons regulatory scheme and another on the ban on billy clubs and blackjacks.

I take it AG Becerra couldn’t get the case reassigned.

Although Benitez overturned the assault weapon law, he granted a 30-day stay of the ruling to allow an appeal. And it will be appealed, and I suspect there’s a good chance the law will be reinstated. But let’s go back to Benitez and failed experiments.

In his 94-page ruling Judge Benitez clearly aims to get the case to the Supreme Court, with its three new Trump-appointed justices, and bring about what he crusades for, a radical doctrine that the Second Amendment extends to weapons of mass killings of helpless, hopeless victims.

Judge Benitez apparently thinks the assault weapons ban is a failed experiment. I have not been an unadulterated fan of assault weapons bans, mostly because “assault weapon” is not really a tightly defined technical term, and a lot of firearms with capabilities very similar to the dreaded AR-15 are not considered “assault weapons.” It’s also the case that one state’s firearm regulations are too easily undermined by laxer laws in other states. But Tiefer provides data arguing that the ban reduced the stockpile of privately owned rifles in California by more than 175,000. Which is better than nothing.

But if you want to talk about failed experiments, let’s look at the experiment we’ve been running in the U.S. This is the experiment to find out what happens when you let any damnfool own and carry guns, including high-velocity semiautomatic rifles like AR-15s. In recent years Republican states have been tripping all over themselves to eliminate even the most modest speed bumps to gun owenership. Licensing and permits are for socialists, you know. All this arm-bearing is supposed to reduce crime, enable public safety, and foster good manners. “An armed society is a polite society,” the Second Amendment advocates like to say.

So how is that working out? The murder rate in the U.S. jumped by 21 percent in 2020, it says here. No doubt a lot of violence was fueled by stress caused by the pandemic, and politics, and social upheavals, but if Americans didn’t own so damn many guns the violence might be a lot less lethal.

See also As Shootings Continue to Surge in 2021, Americans Set to Face a Summer Plagued by Gun Violence in Time; Mass shootings turn America’s gun culture into a killing culture in USA Today; There Have Been, On Average, 10 Mass Shootings In The U.S. Each Week This Year at NPR. Yeah, clearly, that “good guy with a gun” thing is workin’ real well. And are we more polite yet?

Life in the United States — Texas mom accidentally shoots her own child while firing gunshots at roaming puppy.

The woman, 24-year-old Angelia Mia Vargas, was charged with deadly conduct with a firearm after opening fire three times on the 6-month-old boxer puppy but instead wounding her son in the abdomen, reported KTRK-TV.

The puppy had been accidentally left out of the house and was roaming the street; his owner was present and trying to call the pup back to his house.  But Ms. Vargas had a gun handy, so a shooting occurred. The boy and puppy will both recover. Vargas was charged with deadly conduct with a firearm.

Texas lawmakers recently passed a bill to allow open carry of firearms without a permit or required training, which Republican Gov. Greg Abbott is expected to sign into law.

And the carnage will continue. This experiment is not going well. Maybe we should call it off.