After years of Reaganist propaganda that government bleeps everything up, I guess the voters here just expect government to bleep everything up and are not alarmed at the ongoing bleeping up being committed by the state government. Otherwise, citizens would be outraged. The state government is so bleeping incompetent I’d suggest taking all authority away from it and just hiring some managers to straighten things out.

To catch you up, here’s Rachel Maddow on June 3. This video is of the entire program, but the segment to watch begins at about the 1 minute mark. Here’s the transcript if you’d rather just read what was said.

And there is a very real possibility that whoever replaces Sen. Roy Blunt when he retires at the end of next year will be even worse than Josh Hawley. There’s always been a big wackjob element in the state, going back as far as I can remember, but they were never as totally in charge as they are now.

Here’s an update on Kevin Strictland, the man Maddow discussed who has been imprisoned for four decades for murders that even the prosecutors admit he didn’t do. All of the evidence that got him convicted four decades ago has completely fallen apart. It is now beyond all doubt that he was wrongly convicted. The legislature actually did something useful and passed a bill that would allow local prosecutors who believe a prisoner has been wrongly convicted to take that case to court to overturn the conviction and get the prisoner released.

The bill is waiting on the governor’s signature. For that matter, the governor could just pardon Strictland and get him released today. But the governor, Mike Parson, is dragging his worthless feet. ABC News reported,

Republican Missouri Gov. Mike Parson says addressing the clemency petition for a man who’s been behind bars for a triple murder for more than four decades is not a “priority,” even though prosecutors say he didn’t commit the crime.

Parson noted that Kevin Strickland, 62, was tried “by a jury of his peers” and found guilty. But he added that he knew there was “a lot more information out there.”

Did I mention that Kevin Strictland is Black? Also, Parson found the time to pardon 36 people just before the June 3 Rachel Maddow segment aired, and he pardoned 13 other people in May, but other than their names I can’t find any information about those people.

Gov. Parson is finding the time to sign another piece of legislation; he’s doing it tomorrow with great fanfare and ceremony. This is the Second Amendment Preservation Act. “HB 85 declares that it’s the duty of the courts and law enforcement agencies to protect the rights of law-abiding citizens to keep and bear arms. It also declares as invalid all federal laws that infringe on the right to bear arms under the Second Amendment,” it says here. It’s unconstitutional as all get-out, but it’s being signed. I take it from the article linked that this bit of nonsense began to take shape in January, when rural residents and their representatives became hysterical in the belief that there would be a Democratic president who would grab their guns.

Maddow’s segment didn’t talk about the Medicaid disaster. Last year the voters passed a resolution calling for Medicaid to be expanded under the Affordable Care Act. A couple of months ago I wrote that the state government refused to fund it. So there will be no expansion. This refusal was in spite of the fact that the federal government covers 90 percent of the cost of new Medicaid patients and that Parson at the time was, and probably still is, sitting on more than $1 billion in unspent federal covid aid. Lawsuits have been filed.

But now there’s a fight over what cheapskate Medicaid benefits Missouri already hands out. The legislature is fighting over the tax appropriation to fund it. And you’ll never guess why certain conservative Republicans refused to vote for the tax appropriation. It says here, “some senators wanted to attach items to it that would bar Medicaid from paying for certain contraceptives and prevent Planned Parenthood from getting funding.”

Planned Parenthood doesn’t get direct funding from Medicaid; it gets reiumbursements for providing medical services to Medicaid recipients. The infamous Hyde Amendment, still on the books, does not allow Medicaid money to reimburse the cost of abortions. Republican legislatures don’t want Planned Parenthood to be reimbursed for things like cancer screenings and STD testing, either. Exactly what’s going to happen to the state Medicaid program if the tax isn’t passed is not clear, but as I understand it, it’s a matching funds thing, so if the state pays less the feds pay less also.

As I wrote in April, rural hospitals are closing in the state because people who use them are uninsured and can’t pay their bills. Ten hospitals have closed in Missouri since 2016. Expanding Medicaid would go a long way toward getting more money into hospitals to keep them open.

The state has big problems. Much of the rural areas of the state, especially in the southeast section, are desperately poor. Life expectancy is going down; crime, drug use, child abuse and neglect, are going up. These are the voters Mike Parson and Republican legislatures like to favor, because most of those voters are white and vote Republican, but he “favors” them with pro-gun legislation, which is the last thing they actually need. Health care? Jobs programs? Any kind of development? Nah. Let’s dither around and make sure they can’t get abortions. Since the only abortion provider in the state is in St. Louis, that’s pretty much the case already. 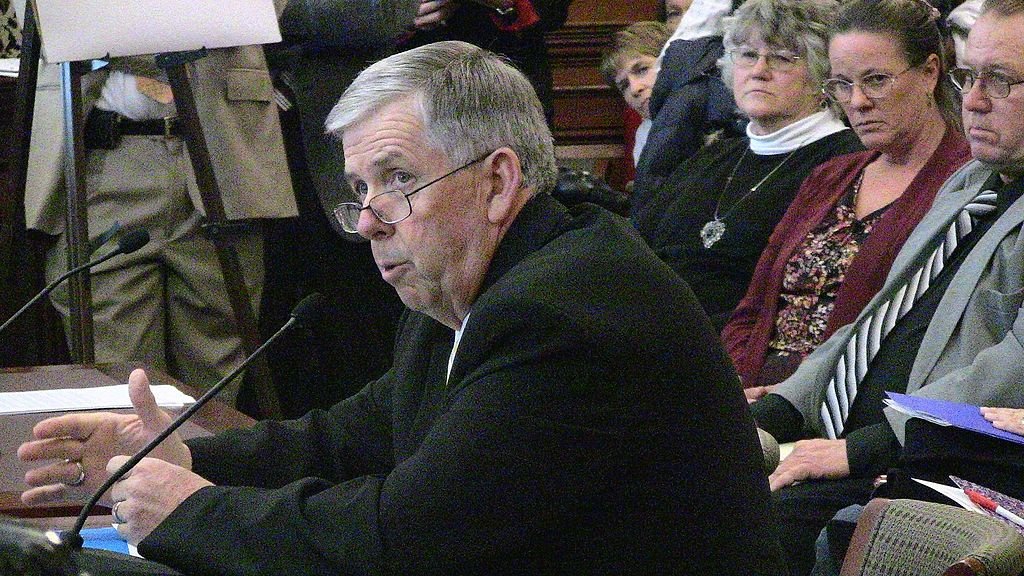 Gov. Mike Parson, who perhaps needs a life coach to help him organize his time..

6 thoughts on “Missouri: The Screw Me State”