Juneteenth is now a federal holiday, which is a lovely thing. Juneteenth is a commemoration of the day on which the last enslaved people in the United States were informed they were free, on June 19, 1865.

However, it’s not clear to me that those were truly the last enslaved people. Slavery hadn’t yet been officially abolished everywhere in the United States. But before going forward to wallow in historical nerdiness, let us note that yesterday’s White House signing ceremony also was lovely.

President Biden got down on one knee to greet Opal Lee, an activist who has been advocating for Juneteenth to be established as a national holiday, ahead of the bill signing at the White House. pic.twitter.com/Hsyjh7eAR2

People can always complain that there are critical race issues to be addressed in the U.S., and a federal holiday isn’t going to fix them. And that’s true. No argument from me. There has also been some fuzziness in the way the history of Juneteenth has been reported, and that’s what I want to address here.

First, what the teevee people keep saying is that the Emancipation Proclamation, which went into effect on January 1, 1863, “freed the slaves.” But the Emancipation Proclamation only freed people in Confederate states, or the “states in rebellion.” Which meant that on the day it went into effect it didn’t actually free anybody.  The Proclamation did not apply to slave states that had remained in the Union — Delaware, Maryland, Kentucky, and Missouri. Further, oddly, it wasn’t applied to Union-occupied areas within Confederate states. This left about 700,000 people still legally enslaved.

Further, West Virginia was admitted to the Union on June 20, 1863, as a slave state. Persons in Virginia who had been technically freed by the Emancipation Proclamation were, technically, enslaved again when West Virginia became its own state. The West Virginia legislature quickly went to work passing a law to end slavery in the state, but it didn’t go into effect until February 1865.

Note also that when the Civil War began in April 1861, slavery was still legal in the District of Columbia. Lincoln signed the District of Columbia Compensated Emancipation Act on April 16, 1862. This was the first act of the federal government to abolish slavery anywhere. In June 1862 Congress made slavery illegal in the western federal territories that had not yet become states.

But why weren’t people freed in the four “border” states? As the war began, Lincoln was in a delicate position; the slave owners in those states might have pushed for secession if they believed a Union victory was going to end slavery. The war certainly was about slavery in that southern states seceded to preserve slavery, but in the early months of the war Lincoln had to be careful to make the war about preserving the Union, not ending slavery, as far as the North was concerned. When in August 1861 Maj. Gen. John C. Frémont, commanding the Department of the West, issued an emancipation proclamation that would have freed people enslaved in Missouri, Lincoln promptly relieved Frémont of command and countermanded the proclamation.

Even if Lincoln wanted to end slavery in the four “border” states, and he probably did, he did not believe he had the Constitutional authority to do so. The question of the legality of slavery was up to individual states. Since the Confederate states had seceded it could be argued that areas in rebellion were no longer states of the Union but had reverted to the status of federal territories. But the legality of slavery in Delaware, Maryland, Kentucky, and Missouri was up to Delaware, Maryland, Kentucky, and Missouri.

But in September 1862, Lincoln’s Emancipation Proclamation reframed the Union effort as a blow against slavery.  As such it was a war measure and a critical piece of foreign policy. The Proclamation’s primary purpose, historians say, was to sway public sympathy in Europe, especially in Great Britain and France, to keep European powers from entering the conflict on the side of the Confederacy. Southern states were a major supplier of raw cotton to Europe, especially to Britain and France, and the Union blockade of the South was keeping all that cotton in southern warehouses. The Confederacy had also commissioned war ships to be built in Liverpool and was buying Enfield rifles and other munitions from British manufacturers, whose ships apparently were very good at running the blockade.

So, British industrialists pressured Queen Victoria’s government to take the side of the Confederacy. But the Emancipation Proclamation made the question of slavery the defining issue of the war for those looking on, and the British public was firmly opposed to slavery by then. Great Britain would remain neutral. France had more or less been hanging back waiting to see what Britain would do, and it remained neutral also.

There was also the matter of the many Black men — some born free, some escaped from slavery — who were highly motivated to join the Union military. In spite of the brave service of Black men who fought in the Revolution, somehow the U.S. military had decided it wanted only White men as soldiers and sailors. But by 1862 the war was dragging on and casualties were mounting. In April 1862 Congress passed two acts to allow Black men to serve in the U.S. military, although those acts didn’t go into effect until January 1863, on the same day as the Emancipation Proclamation. By the end of the war 186,097 Black men had enlisted in the Union Army and approximately 20,000 Black sailors had joined the Union Navy. Many gave their lives.

On June 19, 1865, Union troops — including regiments of the United States Colored Troops — arrived in Galveston Bay, Texas. And on that day, a somewhat disputed story tells us, Union General Gordon Granger proclaimed that slavery had been abolished in Texas. The date was ever after commemorated in Texas as “Juneteenth.”

However, what’s not clear to me is what was going on in Delaware, Maryland, Kentucky, and Missouri. By June 1865 slavery had been ended in West Virginia, but technically it was still legal in the four border states.

Congress passed the Thirteenth Amendment, which abolished slavery everywhere in the U.S., in January 1865. It was quickly approved by most of the northern states, and it went into effect in December 1865, eight months after the war had ended and five months after Juneteenth. Only then was slavery illegal everywhere in the United States.

And, of course, that wasn’t really an end of anything, but just sent the struggle for liberation off on a new trajectory. See also Daina Ramey Berry, The Truth About Black Freedom, at The Atlantic. 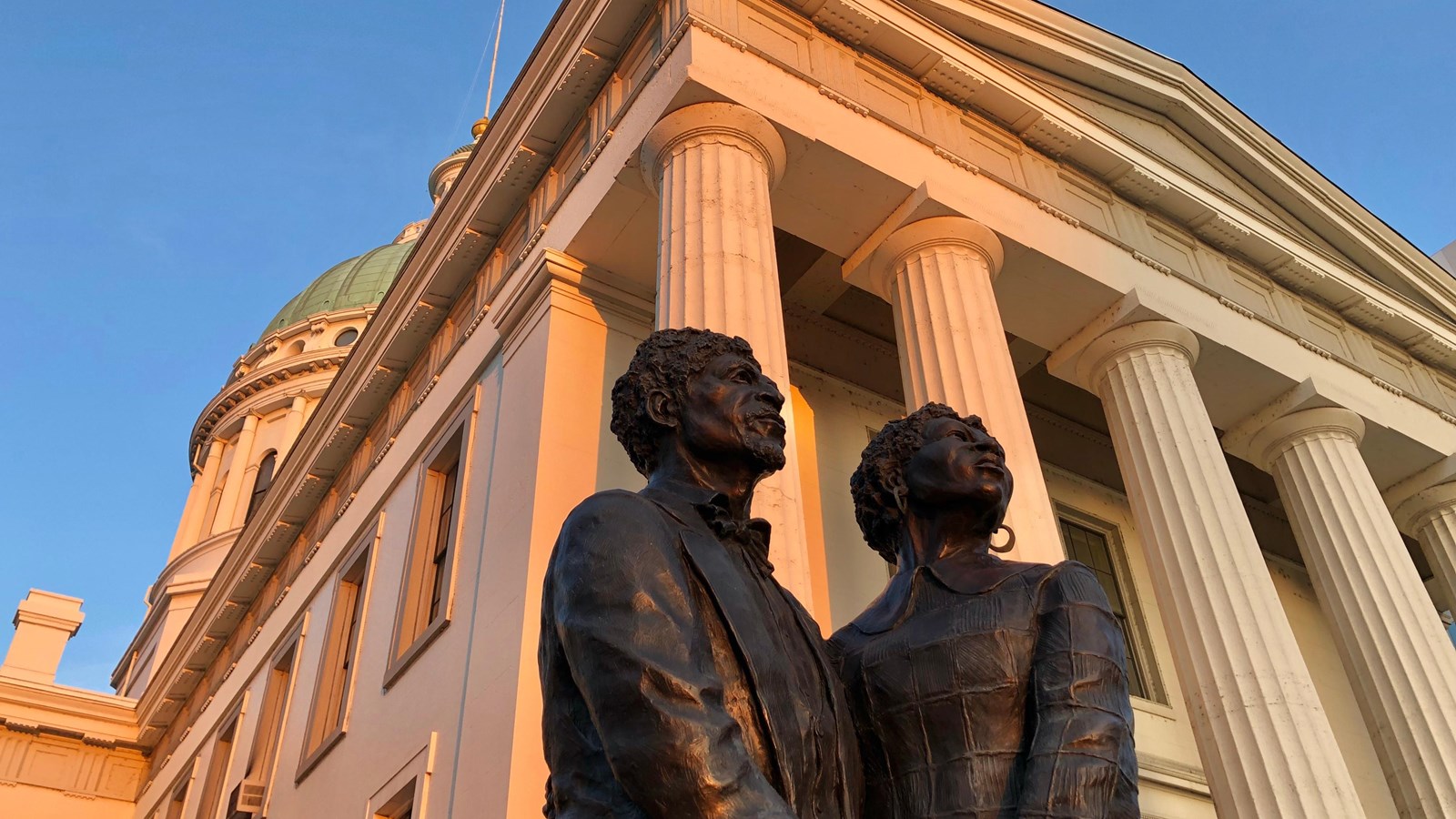 Statue of Dred and Harriet Scott by the St. Louis Courthouse where the Scotts sued for their freedom in 1846.