A long, long time ago I decided that the biggest difference between the two major parties was their style of addressing problems. Democrats have long tended to identify a problem and then think up policies to address it. The policies may or may not work. They may fall way short of what’s needed. They may cost a lot of money. But as a rule Democrats will admit to a problem when it arises and think up something to do about it.

Republicans, on the other hand, most of the time refuse to admit there is a problem, especially if it’s one that can’t be solved with tax cuts and privatization. The classic example of this involves health care. By the late 1980s a lot of Democrats were admitting we needed health care reform. Mike Dukakis made health care reform a big part of his presidential campaign in 1988. But the response to this from Republicans was “we have the best health care in the world” and there was absolutely no reason to lift a finger to reform it.

After all these years the Republicans still don’t want to face the realities of the corrupted, tangled mess that is the U.S. overexpensive and inefficient healthcare system, although most will admit that maybe something needs to be done to bring costs down. But all the “reforms” they can think of basically amount to meaningless tweaks. And like Donald Trump’s famous health care plan that is perpetually two weeks’ away from being ready to unveil, Republicans for at least the past decade or so have claimed to have comprehensive plans for health care in the works that never materialize. Or, if they do materialize, they are very, very stupid and don’t survive being exposed to daylight. See, for example, The Conservative Plan: Don’t Get Sick from September 2009.

The exception to the “What problem?” rule happens when a problem, whether real or imaginary, can be politicized to bash Democrats. Thus the Wall Street Journal even today is giving a lot of space to a story about Hunter Biden’s laptop.

In GOP world, vaccine mandates that don’t exist are a crisis, but not the pandemic itself. But if the pandemic is a problem, then the most important thing is not to slow its spread but to find out who can be blamed for it. There is nothing about the pandemic itself that provides an obvious argument for tax cuts or for privatizing government services, so Republicans on the whole don’t see it as an issue worth addressing.

But since Joe Biden became president and Congress gained a slim Democratic majority, Republicans have put great effort into demonizing everything Democrats are trying to do to save lives. Government overreach! they scream, even as the Delta variant spreads. As I wrote recently, many GOP governors have put more effort into “protecting” their citizens from having to wear masks or get vaccinated than in protectiong their citizens from the bleeping virus. So here is a map showing where covid cases are increasing at the moment: 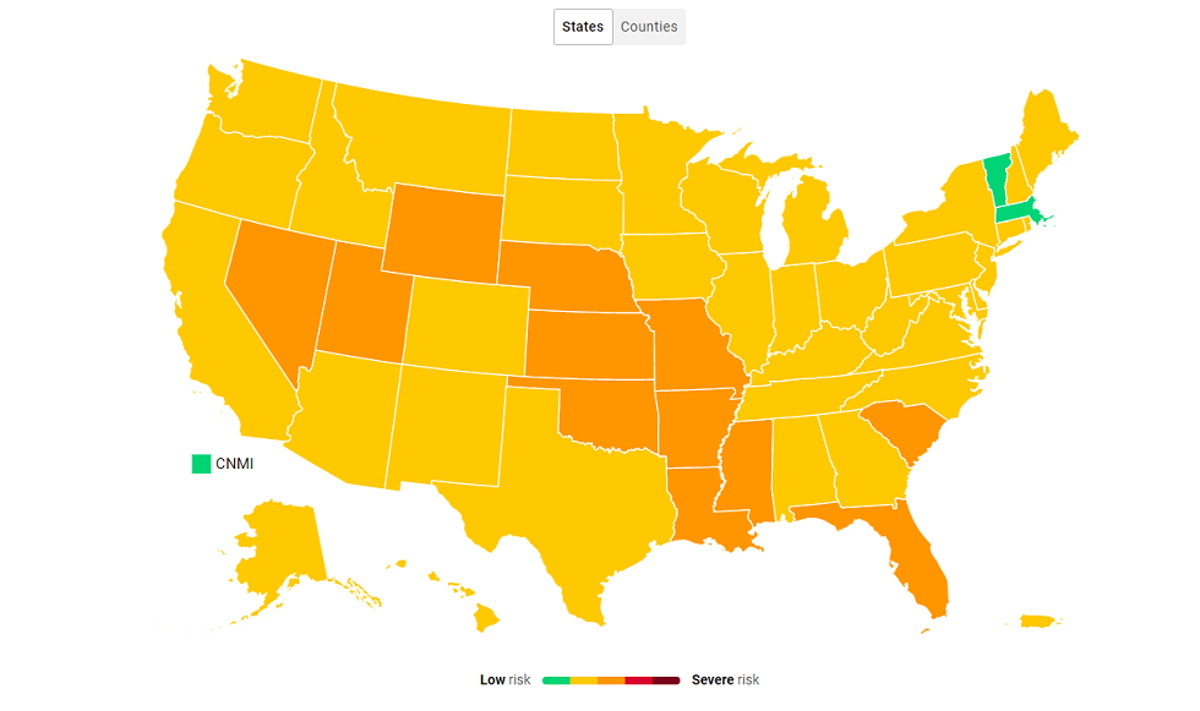 If you’re wondering, Vermont has a 66 percent full vaccination rate, and Massachusetts has a 62.5 percent full vaccination rate. If only we could get to that rate everywhere … It’s just over 50 percent in the US Commonwealth of the Northern Mariana Islands (CNMI), but maybe its isolation has protected it. Sounds like a nice place to visit, though.

This week rightie world went ballistic about government overreach! after President Biden said something about people going door to door to encourage vaccination. Here is that remark, in context.

Because here’s the deal: We are continuing to wind down the mass vaccination sites that did so much in the spring to rapidly vaccinate those eager to get their first shot — and their second shot, for that matter, if they needed a second.

Now we need to go to community by community, neighborhood by neighborhood, and oftentimes, door to door — literally knocking on doors — to get help to the remaining people protected from the virus.

Look, equity, equality — it remains at the heart of our responsibility of ensuring that communities that are the hardest hit by the virus have the information and the access to get vaccinated.

So, as we shift from these centralized mass — mass vaccination sites, where we were doing thousands of people a day, we’re going to put even more emphasis on getting vaccinated in your community, close to home, conveniently at a location you’re already familiar with.

Right on cue, Marjorie Taylor Greene compared this effort to the Nazis.

“Biden pushing a vaccine that is NOT FDA approved shows covid is a political tool used to control people,” Greene tweeted Tuesday afternoon. “People have a choice, they don’t need your medical brown shirts showing up at their door ordering vaccinations. You can’t force people to be part of the human experiment….”

To Greene, “fascism” is defined as “anything a Democrat does.” See also David Graham, “The Rise of Anti-History,” at The Atlantic.

For Greene and others in the Trumpist wing of the Republican Party, anti-history has become a shibboleth. They drop historical references and facts into political debates, but without regard to context, logic, or proportionality. Their villains include Adolf Hitler, but also Mao Zedong and Joseph McCarthy; the Holocaust was bad, but also, Jewish people control the weather. The pose is more than the simple historical illiteracy that’s endemic among American politicians. In this GOP faction, members are willfully ignorant of history, which they view in purely instrumental terms, as a bludgeon to wield even as they do not bother to understand it.

(It might be best to understand Greene as a kind of walking Rorschach test. What she bleats out of her mouth isn’t important and doesn’t make sense, anyway. But whatever you make of what she says reveals something about you.)

But it gets better. At CPAC (yes, they’re holding CPAC again. I think they’re making it a monthly event) Rep. Madison Cawthorn (R-NC) warned his fellow wingnuts that Biden’s door-to-door effort is designed to take away their Bibles. And maybe their guns, too. The la-la is strong with this guy.

If it weren’t for the fact that a big, unvaccinated population increases the likelihood of a new variant developing that can’t be stopped with vaccines, I’d say let ’em be crazy. By this time next year, there will be fewer of them. But people who are not-wingnuts will be endangered, also. Maybe the way to reach the wackjobs is to declare that vaccines are available only to registered Democrats. Then they’ll want them.

See also: Delta variant spills out of an incubator that is also a Midwest tourist hotspot by Josh Wingrove, Bloomberg.