Following up from the last post — I’ll tell you what else that ticks me off. I am tired of the assumption that civil dialogue and “coming together” generally is entirely the responsibility of lefties. We have to be the adults in the room while the Right acts like spoiled brats. We’re perpetually supposed to play Wendy to Peter Pan and the Lost Boys.

For a jaw-dropping example, see Gary Abernathy at WaPo, Stop insulting Trump voters and their concerns. Talk to them. Avernathy wants us to know that Trump supporters truly believe the 2020 election was stolen from Trump and are insulted when their belief is called a “big lie.” And he thinks it was wrong to call out Trump when he, um, misspoke.

In 2016, the New York Times decided to start applying the word “lie” to many of Trump’s claims. “We owed it to our readers,” executive editor Dean Baquet said at the time. Others followed suit. But using words such as “lie” and “falsely claimed” in news stories arrogantly supposes an absolute knowledge of truth and makes it appear the news outlet has chosen sides.

No, Gary Abernathy, sometimes lies are clearly lies, and the facts are easily checked. “I have never seen a president in American history who has lied so continuously and so outrageously as Donald Trump, period,” presidential historian Michael Beschloss said in an interview. Click here for a rundown of Trump’s biggest and most consequential lies. The damage caused by those lies, especially in the areas of elections and public health, are ongoing and staggering.

And I will die happy if I ever see an editorial addressed at Righties telling them they need to listen to and speak more civilly to the Left. No; this is advice given only to Lefties about the Right. Only we are ever called upon to be the responsible adults in this country.

To hear some pundits and Republicans tell it, millions of people across the country who voted for Donald Trump are suffering from an affliction that you might call “Snowflake Syndrome.”

On numerous fronts in our politics — from voting rights to covid-19 to the legacy of Jan. 6 — we’re being told these voters are afflicted with a deeply fragile belief system that must be carefully ministered to and humored to an extraordinary degree.

We must pass voting restrictions everywhere to assuage these voters’ “belief” that the 2020 election was highly dubious or fraudulent. We must not argue too aggressively for coronavirus vaccines, lest they feel shamed and retreat into their anti-vax epistemological shells.

And we must allow Republicans to appoint some of the most deranged promoters of the stolen election myth to a committee examining the insurrection so they’ll feel like its findings are credible.

No; we need them to grow the bleep up.

So the snowflakes are traumatized about having to wear some cloth on their faces during a bleeping deadly public health emergency. They don’t want to get vaccines because it upsets them that Dr. Anthony Fauci tells them to get vaccines. Or that President Biden said something about people going door to door about the vaccines. Or that they might have to face consequences like being refused admission to theaters, never mind death, if they fail to get vaccinated. They’re spoiled little children screaming that they don’t wanna be told what to do. But they also insist on being protected from the consequences of their own irresponsibility.

The sections of the country with low vaccination rates, mostly but not exclusively the very red South, are now holding us all hostage.

A recent study by researchers at Georgetown University, led by Shweta Bansal, an associate professor and an infectious-disease expert, identified locations where vaccination rates are lower than the national average, and crucially, that are also surrounded by other areas with low vaccination rates. They homed in on five specific regions, which they say are the most vulnerable to future outbreaks; four are in the Southeast, and one lies just adjacent. …

… The outbreak that America is now seeing is exactly what Bansal and her team would expect based on their research. As Bansal puts it, “Unvaccinated individuals are efficient fuel like dry wood for the fire of future outbreaks. Vaccinated individuals are like soaked wood—while it can’t easily catch fire, if it’s surrounded by dry wood, the chances are much higher.” In other words, low vaccination rates in the South make this moment less safe for everyone there, and over time could jeopardize the country’s hope of ever getting the novel coronavirus more under control.

And, of course, if next winter is as bad or worse as last winter, these juveniles will blame Dr. Fauci and President Biden. It’s never their faults.

As David Frum put it so well, Vaccinated America Has Had Enough.

But there’s no getting around the truth that some considerable number of the unvaccinated are also behaving willfully and spitefully. Yes, they have been deceived and manipulated by garbage TV, toxic Facebook content, and craven or crazy politicians. But these are the same people who keep talking about “personal responsibility.” In the end, the unvaccinated person himself or herself has decided to inflict a preventable and unjustifiable harm upon family, friends, neighbors, community, country, and planet.

If they aren’t getting vaccinated, we are told, it’s because lefties are mean to them and call them names, and we are supposed to be nice and not shame them and use gentle persuasion and then maybe by 2028 or so they will be more inclined to consent to getting vaccinated. If any of us survive.

But then this happened:

A breast cancer patient says she was sprayed with bear mace, physically assaulted, and verbally abused outside a cancer treatment center in West Hollywood, Los Angeles by far-right activists who were angry over the clinic’s mandatory mask policy.

It’s a bleeping cancer treatment center, you idiots. The patients are on chemo. They are immunocompromised. Yes, there are videos.

I don’t care how deluded/stupid/brainwashed they have been by propaganda, this is just disgusting. They are adults. They have agency. And as far as I’m concerned they deserve nothing but scorn.

Years ago I tried many times to communicate civilly to righties, and nearly always my efforts were thrown back in my face. Most of them cannot be communicated with, adult to adult. There is no point trying, and I rarely do any more. But given that so many of the holdouts are being protected from consequences by their state governments, I don’t know what to do. If you still believe there can be respectful and useful dialogue with obstinate, hostile, and potentially dangerous children in adult bodies, you are welcome to try, but I do not believe it.  What will we do with the unvaccinated? What will we do with Trump cultists who believe the Big Lie? What will we do with people who can’t be responsible citizens? There are too many of them to ignore.

Update: It never stops. Covid cases are rising again in St. Louis, so yesterday St. Louis Mayor Tishaura Jones and St. Louis County Executive Sam Page, both Democrats, announced that a new indoor mask mandate would go into effect on Monday. No closings or other restrictions, yet, just masks.

The citizens of St. Louis and St. Louis County are not subjects — they are free people. As their Attorney General I’ll be filing suit Monday to stop this insanity. #covid https://t.co/30RwiyS9Mr

Schmitt is competing with Mark McCloskey and Eric Greitens for Donald Trump’s endorsement, so to impress Trump he has to step up and be as big an asshole as possible. County Executive Page responded, “Does Mr. Schmitt prioritize the health and safety of those he is supposed to serve or making bombastic remarks to try to elevate his run for higher office?”

Yep. That’s what he does. 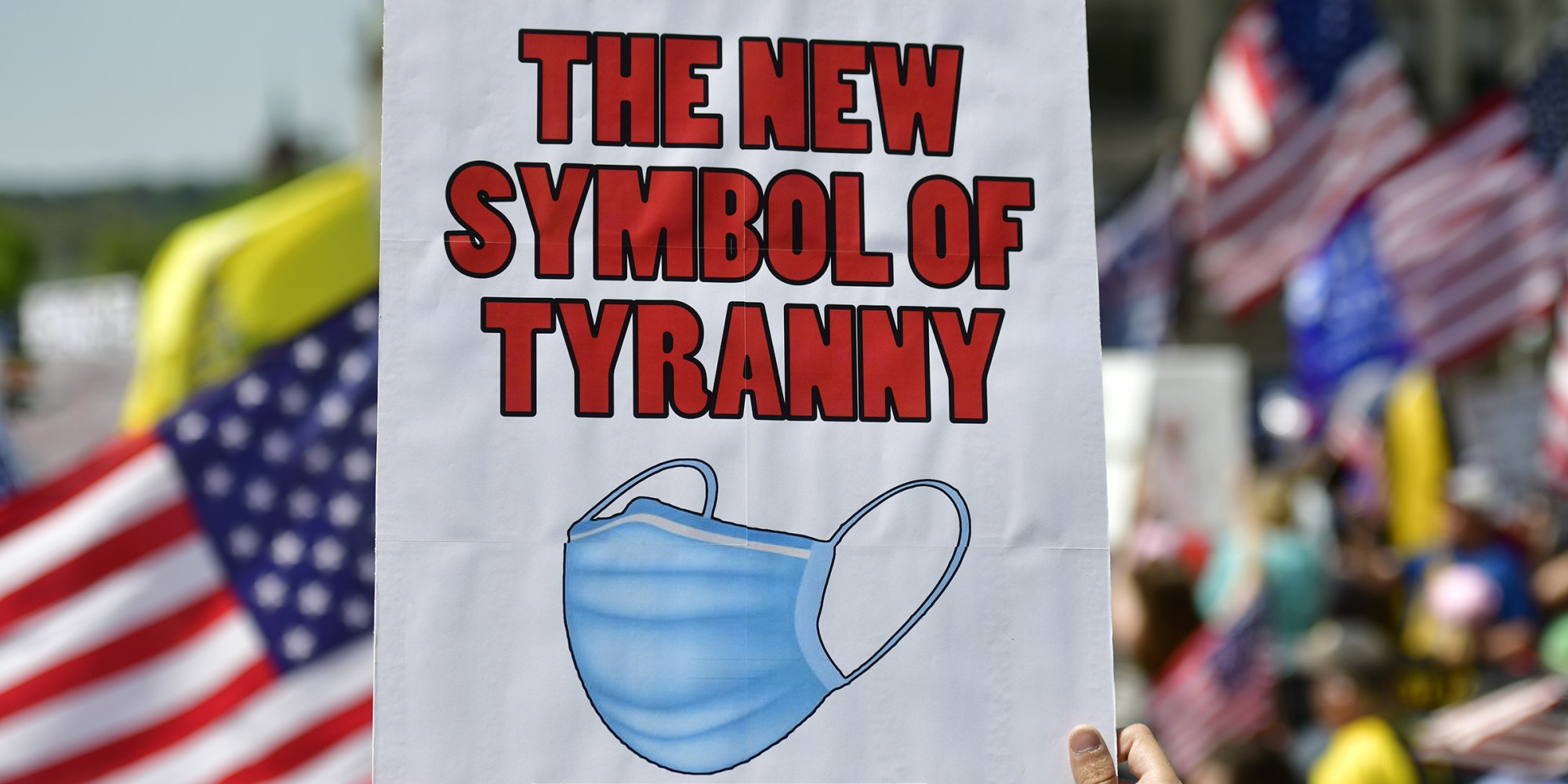