I got tickled at Dave Weigel’s column today. The intro — “The only newsletter that isn’t about Joe Manchin today, this is The Trailer.”

Many people are pissed at Manchin, who is acting up again. He wrote an op ed for the Wall Street Journal saiyng that Democrats should “hit the pause button” on the $3.5 trillion reconciliation package. This is especially infuriating at the very moment the nation is suffering from fires in the West and a super storm in the South and East. Climate change, bro. But Manchin doesn’t want to spend money addressing it.

Just see Joe Manchin’s Dirty Empire by Daniel Boguslaw at The Intercept. Manchin is corrupt as hell. See also Joe Manchin’s new threat to destroy Biden’s agenda is worse than it seems by Greg Sargent at WaPo and Joe Manchin Has Put Biden’s Presidency in Mortal Danger by Jonathan Chait at New York.

Donald Trump’s victory five years ago created, and later fulfilled, the possibility of a 6-3 conservative majority on the court. That emboldened conservatives, especially antiabortion activists who favored so-called “heartbeat” legislation — ending legal abortion at six weeks, when they say first flutter can be detected in embryos. And after Ginsburg’s death, while conservative activists had never felt closer to the end of Roe, Republicans in competitive races said Democrats were overhyping the potential effect on abortion rights.

“I think the likelihood of Roe v. Wade being overturned is very minimal,” Sen. Joni Ernst (R-Iowa) said in a debate days after the justice’s death and one day after Trump nominated Amy Coney Barrett to replace her. “I don’t see that happening.” In his first debate with Biden, Trump scoffed at the idea that Roe was “on the ballot,” telling the Democrat that he didn’t know how the potential justice — who yesterday joined the majority in the Texas case — would rule.

And we all remember Sen. Susan Collins assuring us that Kavanaugh believed Roe v. Wade is “settled law.” This is the line Republicans have walked for a long time. They’ve promised their base they would criminallize abortion while reassuring the public at large that they wouldn’t.

Even given the events of this week, the conservatives on the Supreme Court seem to want to maintain the fiction that they are not hardline ideologues.

The justices who allowed Texas’s law to go into effect hardly seem to love the thought of that backlash. Their order tried to reassure the public by spelling out what was not being decided—and tried to signal that the Court takes all of this very seriously. And even before this particular question arose, during their confirmation hearings, Brett Kavanaugh and Amy Coney Barrett repeated that when it came to Roe, they would keep an open mind. After all, they are neutral arbiters of the law, not pre-committed ideologues.

The justices desperately want the public to believe that is true, even though similar procedural hurdles did not stop the Court from blocking COVID-19 stay-at-home orders that affected in-person worship, and even though the Court’s overnight order made a laughingstock of what is still supposedly a constitutional right. The message was clear: Texas wanted to pass a legal-consequence-free abortion ban, and the Supreme Court wanted to find a political-consequence-free way to uphold one. …

… The Supreme Court may want to reverse Roe, but it is afraid of what will happen when the decision is gone. This fear makes it attractive to hem and haw, to deny and obfuscate. Clarence Thomas may not miss a chance to denounce Roe, but his colleagues are less keen to do so.

They don’t seem to be fooling anyone, however. So Democrats are mostly speaking out and vowing to fight the Texas law. Given their narrow hold on Congress there doesn’t seem to be much they can do, but we can hope it will help inspire a big turnout in the midterms. Republicans, though, are being strangely quiet and pretending that Roe v. Wade isn’t really dead. 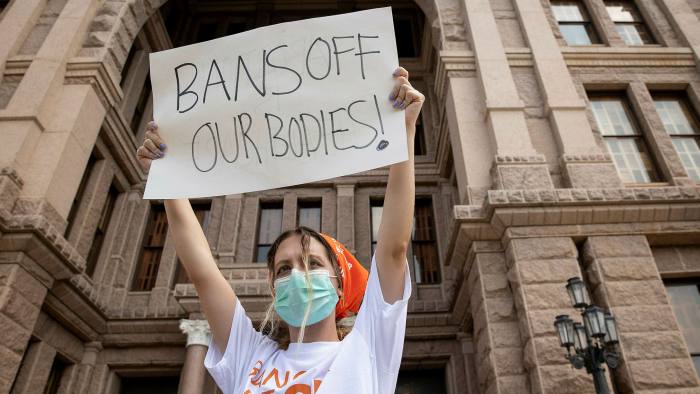 6 thoughts on “Roe May Be Dead; Republicans Hope We Don’t Notice”