Before moving on to the infrastructure bill, do note that the FBI searched James O’Keefe’s home today. That cheered me up, I can tell you. The feds showed up at at 6 am this morning at O’Keefe’s apartment in Mamaroneck, NY, with a warrant, banging on the door and yelling at O’Keefe to “open up.” A neighbor said they even had on FBI jackets, just like on teevee. So cool.

This was in regard to the diary of Ashley Biden, the President’s daughter. Last year burglers took the diary and other items from Ms. Biden’s home. Bill Barr’s Justice Department opened an inquiry. Shortly after that, portions of Ms. Biden’s diary were published on a right-wing website that is not directly connected to Project Veritas. However,

O’Keefe said he was offered the diary but decided not to publish it because he didn’t know if it was authentic. Like lack of authenticity ever slowed him down before. He also claims that his organization gave the diary to law enforcement last year. And no, I don’t know exactly what was in the diary that anyone would care about. Even right-wing media decided to not report on it. See also Legal expert explains how the theft of Biden daughter’s diary turned into a federal investigation.

In other news, a Dallas real-estate agent and January 6 insurrectionist who bragged she wouldn’t go to jail because she is white (and blonde!) just got a 60-day prison sentence. Heh.

Okay, on to the infrastructure bill. Last night before it passed the House, The Hill ran a headline that said Showdown: Pelosi dares liberals to sink infrastructure bill. Yeah, blame the “liberals.” Never the “moderates.” Makes me crazy. But this morning, National Review was ranting Disgraceful House Republicans Rescue Biden’s Flailing Agenda. Six Democrats voted no, but the bill passed because 13 Republicans voted yes.

To National Review, what’s in the bill doesn’t matter; a Republican’s only duty is to damage Democrats. The nation can rot.

I’m happy something passed, but people had better keep their commitments. The Hill reported yesterday,

The eleventh-hour deal between the Congressional Progressive Caucus, moderate Blue Dog Democrats and Congressional Black Caucus would allow the House to pass the $1.2 trillion bipartisan infrastructure package and send it to Biden’s desk, as well as pass a rule setting up a future vote on Biden’s $1.75 trillion social and climate spending package.

The three-way agreement calls for a written commitment that moderates will vote for Biden’s $1.75 trillion social and climate spending package if the Congressional Budget Office (CBO) score of the bill is in line with White House estimates. The statement would be backed by Biden.

I’ll believe the “moderates” will keep their agreement when they do it.

And, of course, the boundless and eternal Stupid that is Marjorie Taylor Greene had to react.

Republicans who hand over their voting card to Nancy Pelosi to pass Biden’s Communist takeover of America will feel the anger of the GOP voter.

Yeah, real Americans don’t need roads or bridges to anywhere, I guess. One of the thirteen “traitors” responded.

Infrastructure=communism is a new one. Eisenhower’s interstate system should be torn up or else the commies will be able to conveniently drive! Red Dawn in real life pic.twitter.com/WTPtBYDSHx

Other members of the dimwit caucus, including Matt Gaetz, are also expressing outrage. The bill passed in the Senate with 19 Republican votes, including Mitch McConnell’s, but that was okay.

Aaron Blake says that five of the thirteen House Republicans who voted yes are from New York and New Jersey, and I can’t imagine that voting to fix infrastructure will hurt them with their voters.

The bill included lots of popular projects and, in another era, probably would’ve gotten significantly more GOP votes. But we live in this era, in which delivering a political win for the other side — however popular the bill and however much your constituents might want it — is seen as apostasy. The demand in the GOP for such devotion to the party line and its election prospects is even greater than on the other side.

President Biden is expected to sign the bill soon. I don’t know if it has been officially transmitted from the House to the President yet. 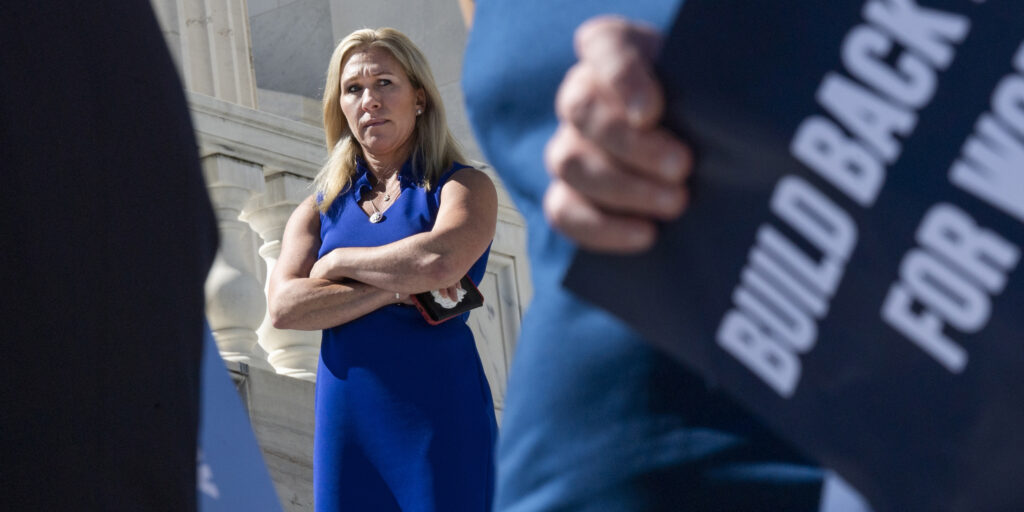 Rep. Marjorie Taylor Greene, passes by a Build Back Better for Women rally held by Democrats on the House steps of the U.S. Capitol, on Sept. 24, 2021.