Why I like Chris Hayes: How much pro-life leaders actually care about life https://t.co/khr57Gs0Zc via @msnbc

It’s so hard to keep up with the insanity. The Texas Tribune reported yesterday that Texas has banned medical abortions after seven weeks of pregnancy. I thought all abortions had already been banned at that point, but I guess the whiz kids in the legislature realized they had left a loophole.

Medical abortions are done by taking a couple of specific drugs a few hours apart to induce a miscarriage. I’ve read the drugs can be obtained through the mail, with a prescription. The new law stipulates that no one may provide abortion medication “by courier, delivery or mail service.” In Texas, now you can’t even go to a pharmacy with a prescription. A physician has to hand you the drugs in person.

“Texas is looking at the ways that people are navigating around restrictions and trying to essentially make that as unsafe and as frightening for people as possible in order to deter them,” said Farah Diaz-Tello, senior legal counsel for If/When/How, a reproductive justice legal group.

Diaz-Tello and other advocates worry that the new criminal penalties may make pregnant Texans fearful of seeking medical care after a self-managed abortion.

It’s my understanding that the medications can be obtained without a prescription in Mexico, so one suspects there is already a robust black market getting underway in Texas. Black markets are not regulated by the FDA, unfortunately. .

The abortion ban that went into effect September 1 allows for abortion in case of “medical emergency,” but it’s written so narrowly that it’s hard to know what kind of “emergency” is allowable. It’s documented that since September 1 at least one Texas woman had to go out of state to terminate an ectopic pregnancy that threatened her life. Her personal physician and the nearest hospital both turned her away because they feared violating the law.

See ‘Her Heart Was Beating Too’: The Women Who Died After Abortion Bans by Sarah Waldman at the New York Times.

If the SCOTUS ends Roe as expected, Texas rules will extend to most states eventually. I suspect only the very bluest states will be able to keep abortion legal. Red states are prepared to ban abortions the minute Roe is overturned, and purple states will be at war until the criminalizers prevail.

At New York magazine, Ed Kilgore writes that For the Anti-Abortion Movement, It’s Been a Long Road Back From the Great Betrayal of 1992. I didn’t know what the “great betrayal” was. Turns out it was the decision in Planned Parenthood v. Casey, which upheld Roe but allowed states to impose some restrictions, such as waiting periods, as long as they didn’t create an “undue burden” on the woman seeking an abortion.

The pro-criminalization people had expected the Casey decision to overturn Roe, and they were bitterly disappointed in what they got. Mark Joseph Stern wrote at Slate,

Casey provoked a sense of betrayal, if not outright trauma, within the conservative legal movement. It prompted GOP attorneys to develop a more sophisticated vetting process for judicial nominees under the slogan “no more Souters.” Potential Supreme Court justices are now carefully screened for their anti-abortion bona fides with thinly veiled questions about “unenumerated rights” and “substantive due process.”

This won’t-get-fooled-again sentiment culminated in the implicit deal struck between the anti-abortion movement (including its conservative Evangelical and traditionalist-Catholic religious sponsors) and one Donald J. Trump in 2016. As he sought to consolidate his control of the Republican Party following his hostile takeover of the GOP in the presidential primaries, he violated all the rules of decorum by flatly promising to appoint only Supreme Court justices who would overturn Roe. Of equal importance, he published (and regularly revised) a list of potential justices from which he would choose, giving anti-abortion activists plenty of time to vet them. And most important, once he was elected, he turned over his judicial-vetting operation to the conservative legal warriors of the Federalist Society (and, to some extent, the Heritage Foundation).

In brief, the Court is now packed with several people whose entire raison d’être as Supreme Court justices is overturning Roe. They would never have been placed on the Court were they not considered “safe” on ending abortion rights. And they know it, even as they’ve carefully denied it.

Perhaps it would be refreshing if the conservatives on the U.S. Supreme Court no longer felt the need to lie to us. The lying, after all, is becoming nearly untenable—especially for an institution that relies on public confidence. After confirmation hearings in which they promised that stare decisis was a deeply felt value and that Roe v. Wade was a clear “precedent of the court” and “the law of the land.” there’s something sort of soothing about knowing the lying to our faces will soon be over. They were all six of them installed on the Supreme Court to put an end to Roe v. Wade after all, and that is exactly what they intend to do. There will be no more fake solicitude for women making difficult choices, no more pretense that pregnant people really just need better medical advice, and no more phony concerns about “abortion mills” that threaten maternal health. There is truly something to be said for putting an end to decades of false consciousness around the real endgame here, which was to take away a woman’s right to terminate a pregnancy—rape, incest, abuse, maternal health no longer being material factors. At least now we might soon be able to call it what it is.

Linda Greenhouse at the New York Times writes The Supreme Court Gaslights Its Way to the End of Roe. The subscription firewall has been neutralized, I believe; do read it. She documents the five-alarm disingenuousness in the questions asked by the “conservative” justices. And at the end, she said, the gaslighting prize goes to Brett Kavanaugh, who asked why court’s should even “take sides.” Let states decide!

The same argument could be used to support racial segregation and an end to same-sex marriage, of course. Over many decades one of the Court’s most solemn purposes has been to protect rights of U.S. citizens from violation by state law, per the 14th Amendment. Letting states “decide” which civil rights are protected and which are not would set us back about 150 years. The “conservative” justices may be about to end a lot more protected rights than just a right to abortion.

Can Justice Kavanaugh really believe what he said? We’ll see soon enough. Last month, the court heard arguments in a case that challenges New York’s strict requirement for a license to carry a concealed weapon. Most states have looser restrictions. New York, through its legislative process, is in a minority.

Will Justice Kavanaugh and those of his colleagues who glorify a recently manufactured version of the Second Amendment allow New York City to keep going its own way on gun safety in the name of “letting the people decide”? That’s about as likely as the chance that those very same justices will decide to keep the right to abortion on the books. In both cases, we know what they’re going to do. The only mystery is how they will explain it.

I’m sure it will be … creative. 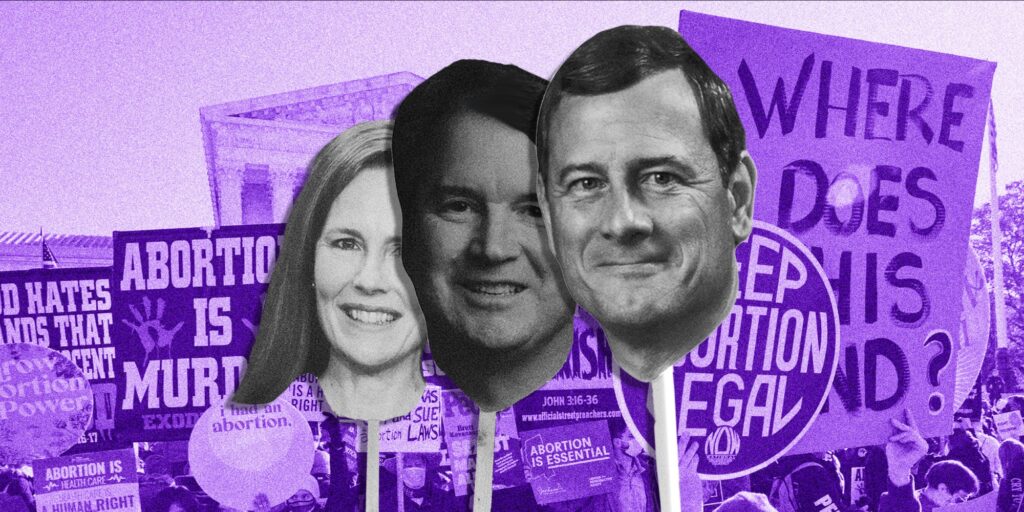