Sean Hannity’s involvement in the January 6 insurrection was much discussed on MSNBC last night. We already knew that Hannity had been in contact with Mark Meadows during the riot. Hannity wanted Trump to put a stop to the rioting, which suggests that Hannity realized this was Trump’s party all along.

But yesterday the special House committee investigating the riot made public more of Hannity’s emails to White House Chief of Staff Meadows, including several communications while the insurrection was being planned. Two major points:

One, it’s beyond obvious from the released emails that Hannity saw himself as an operative of the Trump White House, part of Trump’s team, not an independent journalist. Hannity clearly was trying to protect Trump and influence what was being planned. In doing so, he sat on the scoop of a lifetime. He also can’t very well claim any sort of journalistic privilege or protection, although that’s what his lawyer did today. I’ll come back to that.

The committee has requested Hannity appear and answer some questions. According to Axios,

In a letter to Hannity, Chair Bennie Thompson (D-Miss.) and Vice Chair Liz Cheney (R-Wyo.) wrote that they seek “voluntary cooperation on a specific and narrow range of factual questions” and are not seeking “information regarding any of your broadcasts, or your political views or commentary.”

Two, Axios says that Hannity is being represented by Jay Sekulow, a lawyer on Trump’s legal team. The excellent Heather Cox Richardson points out in her email newsletter,

Hannity is apparently being represented in this matter by Jay Sekulow, a lawyer on Trump’s legal team, rather than lawyers from the Fox News Channel. While Sekulow has indicated he will object to the committee’s invitation on First Amendment grounds, the fact that the Fox News Channel seems to be standing back suggests that the corporation does not see the committee’s invitation as a First Amendment case involving freedom of the press and in fact might well be concerned that one of its lead personalities is connected to an event that should have been reported to the FBI.

Sekulow has complained to the committee that the request raises “serious constitutional issues including First Amendment concerns regarding freedom of the press.” Seriously? Again, these were not the communications of a journalist or investigator seeking information, but of someone trying to counsel and guide White House plans while studiously keeping these plans secret from the public. 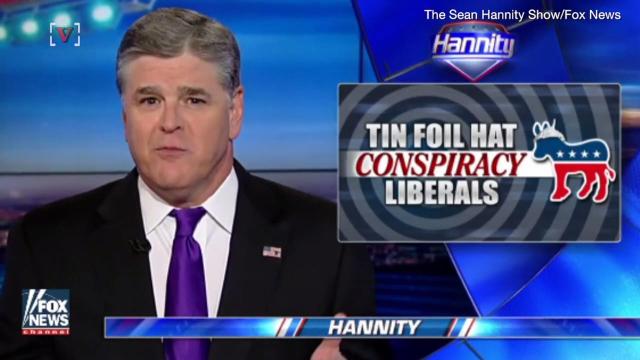 Sean Hannity in happier (for him) times.