In a recent Senate committee hearing about oversight of the Capitol police, Ted Cruz called the January 6 insurrection a “violent terrorist attack.” And boy, did he catch grief for that.

From the Texas Tribune:

After spending a day being slammed by TV pundits and fellow conservatives for describing last year’s U.S. Capitol insurrection as a “violent terrorist attack,” U.S. Sen. Ted Cruz walked back his comments on Thursday.

The Texas Republican attempted to clarify his intent on FOX News program “Tucker Carlson Tonight,” calling his own words “sloppy” and “frankly dumb.” Cruz insisted he was referring only to the rioters who attacked police during the breach of the historic building.

The Right vilified Cruz for apostasy, so Cruz got on Fox News last night to do explain himself and seek forgiveness. Greg Sargent:

Sen. Ted Cruz is facing a vicious backlash from Tucker Carlson and the right for describing the Jan. 6 assault as a “violent terrorist attack.” So on Thursday night, the Texas Republican gamely ventured into Carlson’s Fox News sanctum, where he plainly hoped to do his penance and move on.

Instead, Carlson placed Cruz in the stocks and administered a brutal whipping.

The Right does not tolerate even the least deviation from canonical dogma. In this case, Carlson made it clear that none of the January 6 perps were to be called “terrorists,” no matter what they did that day. Righties are the same people who claim to be in favor of “freedom” and against “cancel culture,” mind you. And Tucker has no problem calling Black Lives Matter activists “terrorists.”

Terrorism is defined in the Code of Federal Regulations as “the unlawful use of force and violence against persons or property to intimidate or coerce a government, the civilian population, or any segment thereof, in furtherance of political or social objectives” (28 C.F.R. Section 0.85). Kind of sounds like what happened last year on January 6. So far none have been charged with terrorism, but as A.G. Garland said the other night, the big fish have yet to be processed.

Greg Sargent writes that Carlson’s whipping of Cruz is part of the effort to deny that the January 6 insurrection was an insurrection. “The valorization and mythologizing of Jan. 6, which Carlson traffics heavily in — indeed, this led to the resignation of two Fox contributors — require erasing the degree to which it constituted a genuine effort to thwart a legitimately elected Democratic government from taking power, an effort to fundamentally subvert our constitutional arrangements,” Sargent writes. Only the Left, especially Black Lives Matter, are threats to America. Not the Right. Only the Left is capable of terrorism. This is what must be believed.

It’s the key to valorizing the underlying goals of the Jan. 6 rioters and to the mythologizing of them as heroes and patriots. It lays the foundation for treating what they call the “regime,” i.e. democratically elected Democratic governments, as illegitimate, justifying Jan. 6, corrupt procedural efforts to overturn elections, the flirtation with political violence, and who knows what future acts in response.

And, if you are part of the Right, you had better watch what you say. No thinking for yourself; no coloring outside the lines. You may say only what the Party, or whatever the Right is these days, allows you to say.

And these people fancy themselves to be defenders of “freedom.”

Cruz has meekly returned to the fold of political correctness (in the original sense of the term), and if he is careful he will be allowed to remain in the good graces of the Party. But it does underline the Right’s Orwellian understanding of “freedom.”

From The Hill: “Cyber Ninjas, a firm hired by the Arizona state Senate to conduct a review of Maricopa County’s election results, on Thursday announced that it is shutting down after a county government report slammed the firm and a judge ordered it to pay $50,000 a day in fines.” We weep and we mourn.

Amaud Arbery’s killers have been sentenced to life in prison, two without parole. Finally.

QAnon Star Who Said Only ‘Idiots’ Get Vax Dies of COVID 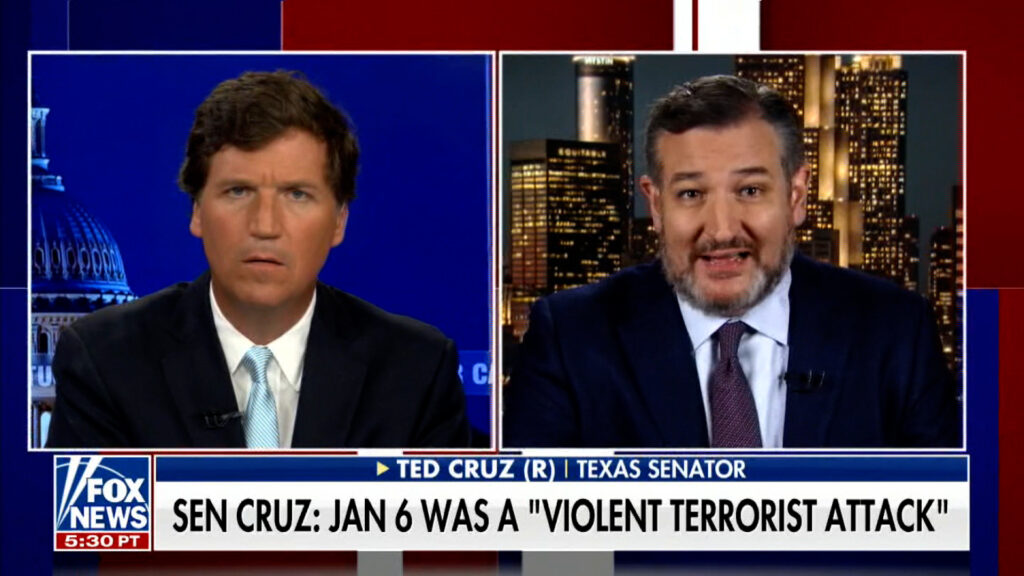