I’ve learned a lot about “seditious conspiracy” over the past several hours. It’s a very rare charge, and it’s an even rarer conviction. Looking at the handful of trials over the past century or so, it appears Blacks, Puerto Ricans, and Muslims are convicted, but Whites are not. No big surprise.

In an article published in Mother Jones a few days before yesterday’s indictments were announced, Anthony Conwright wrote that American tradition casts violent white nationalism as “well-meaning patriotism gone awry, instead of as an ideology antithetical to our best aspirations.” The last couple of times right-wing whites were charged with seditious conspiracy were in 1988 (white supremacists) and 2010 (Christian “patriot” millitia members). All acquitted.

The 1988 trial was in Fort Smith, Arkansas, and the defendants were affilliated with the Ku Klux Klan, Aryan Nation, and the like. They had elaborate plans to overthrow the U.S. government, or at least break off the northwest part of it to establish a whites-only nation. The plans included the murders of a judge, FBI agents, and a founder of the Southern Poverty Law Center. At least one of the defendants had separate murder convictions, so it’s not unreasonable to think they would have tried it. Anthony Conwrite said,

The prosecution had 113 witnesses and FBI wiretap transcripts capturing the accused coordinating about stockpiling weapons and conducting armored car robberies, assassinations, and municipal sabotage. Before the verdict, the judge told the jury, “The fact that you may think it was impossible for the defendants to overthrow the government is not a defense to the charge.”

Despite that instruction and mountains of evidence, the 14 white supremacists were acquitted by an all-white jury. One juror went on to marry a defendant; another told a reporter he agreed with many of the white supremacists’ ideas. But what may have sealed the acquittal was that the jury did not find the argument that the defendants were dangerous credible. In other words, they did not believe white supremacy was a coherent pathway to topple the American government—or they did not care if it was.

One of the defendants was Richard Snell, who had previously been convicted of murdering a pawn shop owner (Snell suspected he was Jewish) and a state trooper.

Snell was executed for his earlier charges on April 19, 1995, the same day Timothy McVeigh blew up Oklahoma City’s federal building, which Snell had previously plotted to bomb himself.

Oh, and another Fort Smith defendant went on to kill three people outside a Jewish Center. He died in prison.

See also this Twitter thread by Kathleen Belew. A lot of screwy things went on in the Fort Smith trial. The prosecutors didn’t seem to want to prosecute all that much.

Belew is the author of a book titled Bring the War Home: The White Power Movement and Paramilitary America (Harvard University Press, 2018). In 2018 she wrote an op-ed for the New York Times in which she argues that the White Power movement is far more integrated and organized than most people realize, and they are capable of doing a lot of damage. But the FBI persists in treating White Power types as individuals, or “lone wolves,” not part of a movement. She wrote,

Indeed, the F.B.I. established a policy to pursue only individuals in white-power violence, with, according to F.B.I. internal documents, “no attempts to tie individual crimes to a broader movement.” This strategy not only obscured the Oklahoma City bombing as part of a social movement but, in the years after McVeigh’s execution, also effectively erased the movement itself from public awareness.

See also Lone Wolves Connected Online: A History of Modern White Supremacy in the New York Times, January 2021, by Laura Smith.  She also writes that McVeigh was not any sort of lone wolf but was well connected into a larger movement that, for some reason, the public never heard about.

The Murrah building had long been a potential target for white supremacists. Kerry Noble had cased the premises with other C.S.A. members as early as 1983. They had even begun building bombs, but one of them exploded in a C.S.A. member’s hand, which the group considered a sign from God to wait. When McVeigh did carry out the bombing, Mr. Noble was working as a vacuum cleaner salesman in Texas. He saw the news on television and recognized the plot instantly. “They did it,” he remembered thinking. “They finally have done it.”

In a legal irony, McVeigh’s defense team essentially argued what the prosecution in the Fort Smith trial had argued: that the bombing was orchestrated by a complex network of white supremacists and far-right militia members. According to Mr. Jones, three weeks before the bombing, McVeigh called someone living in Elohim City, a far-right compound in Eastern Oklahoma with connections to the C.S.A., the Aryan Nations and the Order. “His supply chain plus his travels indicated a fairly sophisticated group of people,” Mr. Jones said. “It was our opinion that most of the ones that he associated with were either the Midwest bank robbers or people at Elohim City.”

He added: “I was convinced after talking to him, analyzing carefully what he said through numerous interviews, that he was trying to protect others, and assuming all the responsibility himself.”

But only McVeigh and one immediate accomplice, Terry Nichols, were convicted in the bombing. The government’s case, Mr. Jones argued, missed a big part of the story.

“They never referred to Tim McVeigh as a terrorist,” Mr. Jones said. “It was a murder case. And so they avoided the political connotation.”

This is the first time I have heard most of that.

Fast forward to January 6, 2021. The insurrection has not been packaged as a White Supremacist undertaking, but there’s a lot of evidence that it largely was. Kathleen Belew recently wrote for the Washington Post, Militia groups were hiding in plain sight on Jan. 6. They’re still dangerous.

The invasion of the Capitol is best understood as the collision of three streams of right-wing activity: the Trump base (itself containing a range of extremism), the QAnon movement, and white power and militant right groups. This third segment — although probably smaller than the others involved that day — was highly organized, connected, outfitted with tactical gear and weapons and well-trained. These activists often led the charge, and they were the first to breach the Capitol. Their own ideology, which descends from decades of violent white-power organizing, reveals them to be dangerous, intent on the destruction of democracy and the propagation of race war.

Why was Washington so unprepared? Why was the FBI, the Capitol police, and others, so unprepared? One does suspect that the mindset that simply doesn’t take white nationalist activists/terrorists seriously is part of it. That has to stop.

I’d like to believe that if the three meatballs who murdered Ahmaud Arbery could be so righteously convicted and sentenced in Georgia, it’s possible some of the January 6 perps could be convicted of sedition and get serious jail time. Which would be a good thing for all of us. 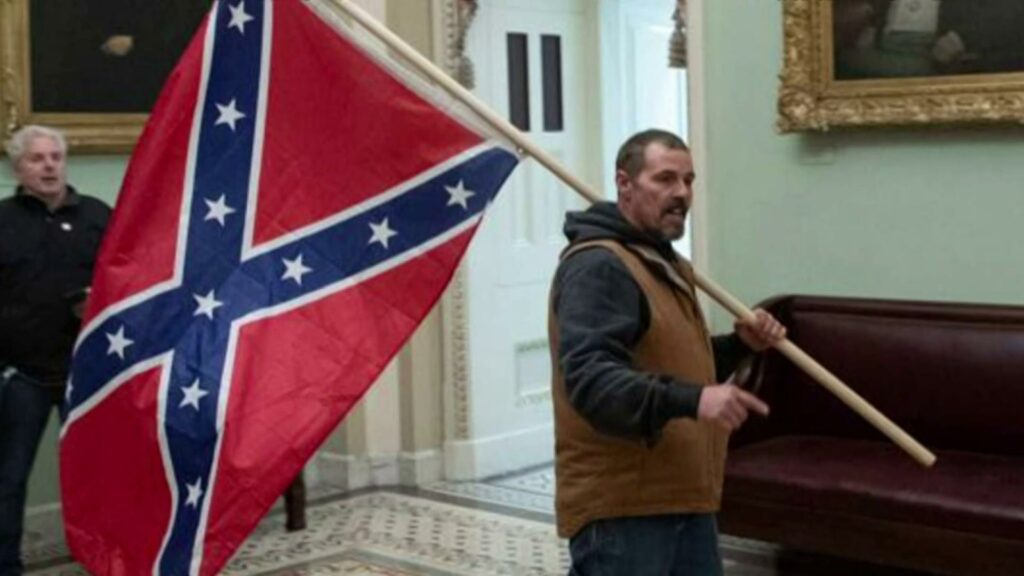 9 thoughts on “White Supremacy and Sedition”